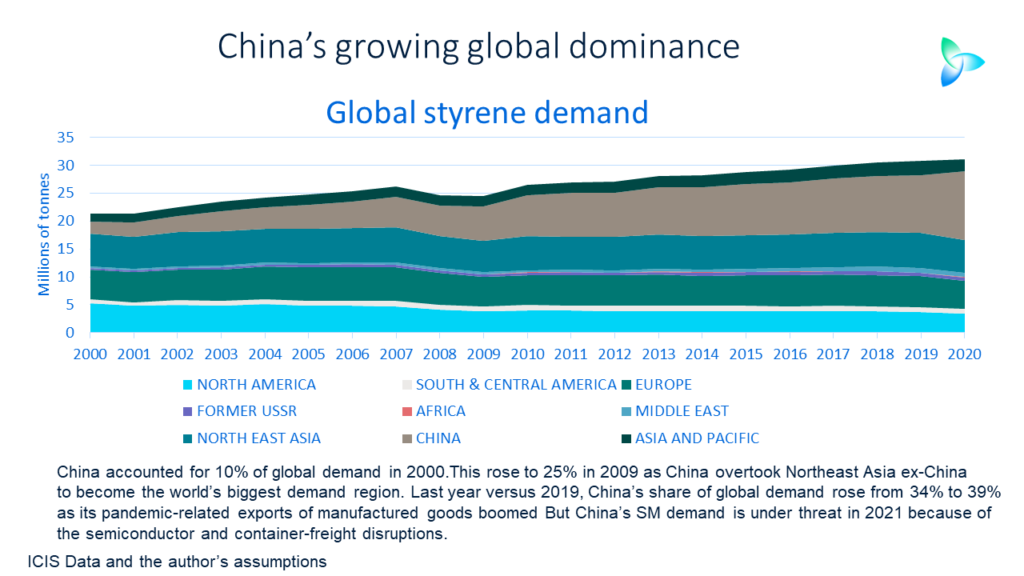 PETROCHEMICAL companies need to set up demand teams that focus on all the new short and long-term variables that have left us completely at sea on how to assess consumption.

We need to almost start from scratch as regards demand management. Everything needs to be on the table for confidential and completely free discussion, as I discussed last week.

What has further emphasised the need for these teams is the worsening global semiconductor shortage.

In January, when the shortage first became apparent, conventional thinking suggested that it would be resolved within a few months.

But at the time I warned this might not be the case and have continued to warn that the problem could drag-on for most of this year.

You only had to look at the extraordinary growth in electronics and white goods sales in 2020 – because the cash-rich middle classes were stuck at home in lockdowns – to realise that lingering supply chain imbalances were possible.

The semiconductor supply crunch at first only affected the auto industry. But in February, Samsung warned that the shortage might affect smartphones production.

So, here we are at crisis point for semiconductor supply, The Guardian newspaper reports.

“Consumers are facing price rises and shortages of products from TVs and mobile phones to cars and games consoles as a global shortage in semiconductors grows,” wrote The Guardian.

The problem was the result of auto manufacturers investing in tech-heavy electric vehicles, increased sales of TVs and home computers and the launch of new games consoles and 5G-enabled mobile phones, the newspaper added.

Another issue specific to the chips used by the automakers was an unexpectedly strong recovery in Chinese autos demand late last year because of China’s rapid economic rebound from the pandemic.

Microchip supply to the autos sector has been further affected by the 22 March fire at the Japanese chipmaker, Renesas. The company said it would take a least a month to resume production at its 300mm wafer line in Naka plant, northeast Japan.

The fire could affect auto companies in Japan, Europe and the US because Renesas supplies around 30% of the global microcontroller-unit chips used in cars, said Reuters.

And don’t forget the container-freight issue

The other big global supply chain issue that will impact petrochemicals demand in 2021 is of course the shortage of container-freight space.

It had been thought the shortage, another product of the pandemic, would be resolved by the end of the Chinese Lunar New Year Holidays in late February.

Then the expectation was that the problem would be sorted out by the northern hemisphere spring. The latest forecasts are that the shortage will be over by the summer or by the end of 2021.

We do not have a clue about the extent to which both the semiconductor and container-freight shortages have affected Chinese export growth in Q1 this year versus the fourth quarter of 2020. To repeat, this is the only valid measure and we still don’t have the data.

Why China’s quarter-on-quarter export strength is so important to understand is because it was its booming exports of manufactured goods during 2020 that lifted most global petrochemicals boats.

Because China dominates global petrochemicals demand and imports, its strong export trade was great news for petrochemicals producers in many other countries.

China’s exports might decline for reasons other than just supply-chain problems.

Assuming lockdowns ease in the developed world during 2020, to what degree will demand for game consoles and computers decline as people return to something like their old lifestyles?

A third wave of the pandemic in Europe has led to lockdown measures being extended.

But the extensions might not mean the same robust demand for computers, games consoles and white goods in 2021 as in 2020.  These are all occasional purchases and so at some point we will reach peak demand. Or has peak demand already arrived?

Back to the issue of supply chains and global shipping in general, not just the container-freight business.

Of the world’s 1.7m seafarers, 900,000 are from developing nations. Vaccines might not be available to all developing countries until 2024, said the Financial Times, quoting analysis from the International Chamber of Shipping.

The vaccination nationalism I first warned about last August may not just set back the economic recovery in the developing world ex-China. It could also cause disruptions across all types of shipping – gases, liquids, dry bulk as well and the container trade.

Scenarios for China styrene demand in 2021

As I keep stressing – as this is so, so important for your business planning – the only sensible approach in this chaotic environment is to build scenarios for pricing, operating rates, margins and supply and demand etc.

Once you have established your new demand teams to work on better ways of forecasting consumption, the more immediate task your teams can perform is to build these scenarios – and constantly revise them.

For example, nobody knows whether a discrete vaccination programme will be set up for the world’s 1.7m seafarers. If a programme were stablished, we would need to evaluate its success.

Let’s now look at the styrene monomer (SM) business as an example of the wide range of potential outcomes in 2021.

I have chosen SM for today’s post because some 55% of final end-use demand in the key China market is thought to be used directly or indirectly in the electronics, white goods and autos end-use markets.

Let’s start with some essential context before we move onto the scenarios for 2021. This is the chart at the beginning of this blog post.

We had expected China’s SM demand to grow by 4% in 2020 over 2019. Growth was instead in the region of 18% to demand of 12.3m tonne, largely because of China’s soaring electronics and white goods exports.

Assuming our original 2020 forecasts for SM demand for all the other regions, 18% growth would leave China with a 39% share of global demand. This would compare with 34% in 2019.

Estimates for 2020 SM demand are only preliminary as our final numbers will be released later this year.

But the final numbers will, I believe, still show the increased role of Chinese demand globally. While its demand exceeded expectations, other countries and regions struggled. For instance, US demand fell by 20% in 2020, according to the US-based Chemical Data & Intelligence, the ICIS service.

See the three scenarios below for what could happen to China’s SM demand in 2021 versus what actually probably happened in 2020. 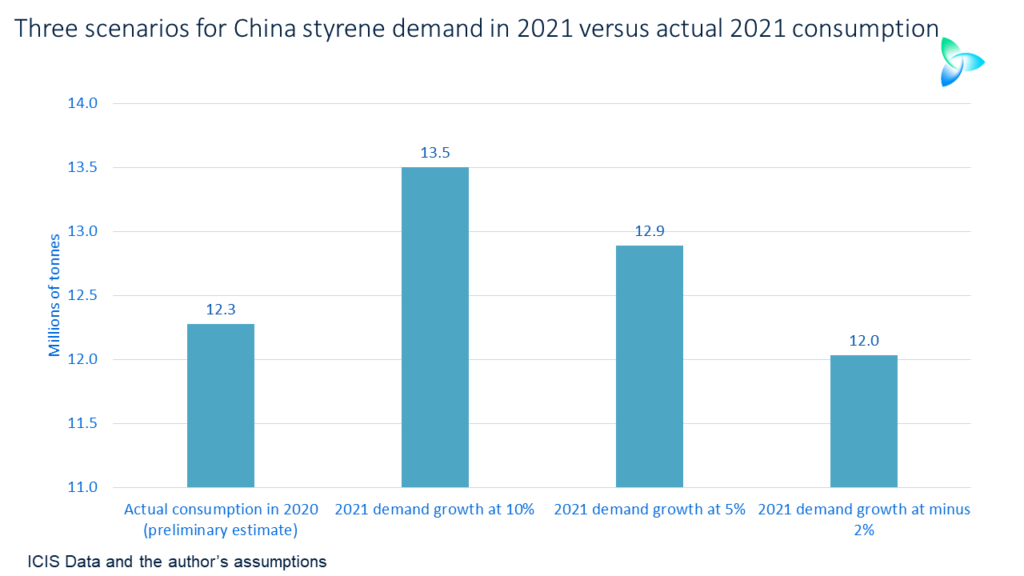 Scenario 2 – growth of 5% – would involve a sharp decline in exports because of supply chain and other issues. This would leave demand at 12.9m tonnes.

Growth of minus 2% – Scenario 3 – assumes a very big correction in demand.  Consumption would be 12m tonnes.

Any number of other outcomes are possible because of today’s exceptional uncertainties and ambiguities. This means there is no time like the present to set your demand team.

PREVIOUS POST China petrochemicals and the lack of logical basis for the 2021 boom theory
NEXT POST China's environmental policies: scenarios essential for impact on local and global petrochemicals