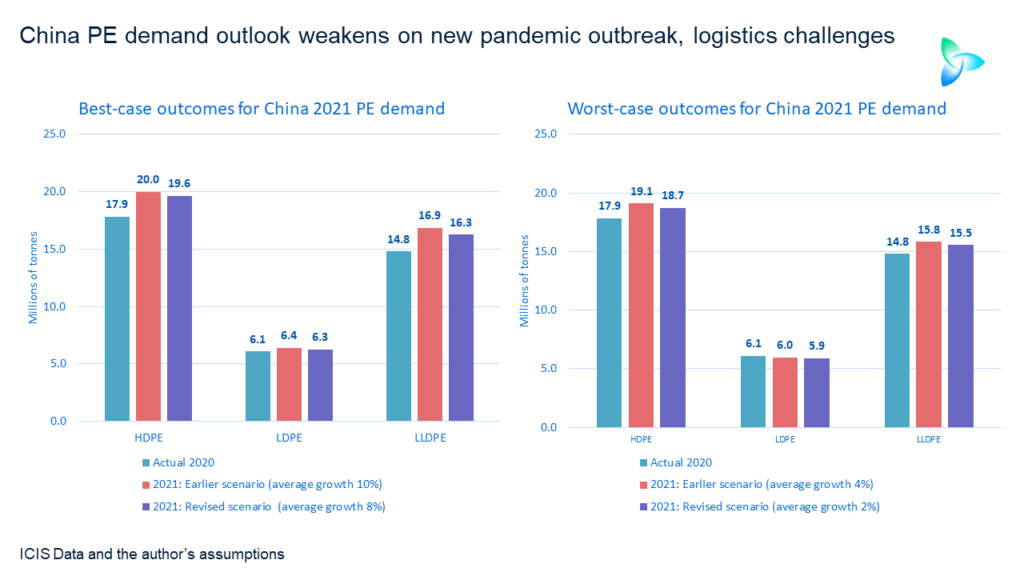 NOW THAT we have the final data for 2020, for last December, we can complete the picture of what was a truly extraordinary year. As I’ve been highlighting since last August onwards, a pandemic-related shift in demand led to a much stronger Chinese polyethylene (PE) market than just about anyone had expected. The same applied to other petrochemicals and polymers.

The final data for 2020 show that when you add China Customs Department net import numbers to our estimates of local production (apparent demand), high-density PE (HDPE) consumption reached 17.9m tonnes in 2020 versus real demand in 2019 (adjusted for inventory distortions) of 15.9m tonnes, a 12% increase when you consider the exact numbers.

Low-density PE (LDPE) demand was disappointing as, on an apparent basis again, its consumption fell to 6.1m from 2019’s real demand of 6.2m tonnes. This was minus 3% when also look at the exact numbers.

But this was really story of reduced LDPE availability because of LDPE/ethylene vinyl acetate (EVA) producers swinging to EVA production on better EVA margins. This made LDPE comparatively expensive versus linear low-density PE (LLDPE), which can be used in many of the same end-use applications; so, of course, converters switched to LLDPE.

Big increases in LLDPE capacity also made the polymer more affordable versus LDPE. This was reflected in price premiums for LDPE versus LLDPE in China and southeast Asia. In both these countries and regions, LDPE premiums over LLDPE were at an eight-year high in 2020. Hence, LDPE demand suffered versus LLDPE.

And LLDPE demand sure did benefit, both from less affordable LDPE and from a pandemic-related boost to consumption. The full data for 2020 show that China’s LLDPE apparent demand increased by14% to 14.8m tonnes from 13m tonnes of real demand in 2019.

Across the three grades of PE – and despite the 3% decline in the LDPE market – this left average 2020 annual apparent demand growth at 10%. Total apparent PE demand reached 38.7m tonnes versus last year’s real demand of 35m tonnes.

The 2020 demand numbers are only on an apparent basis as they have yet to be adjusted for any end-of-year overstocking.

But consider this: China’s December 2020 HDPE imports fell by 16% versus November 2020, with LLDPE and LDPE imports both 7% lower. December is normally typically a month when imports rise versus November as stocks are built ahead of the pre-Lunar New Year holiday manufacturing push.

Also consider the continued reports of strong demand because of booming internet sales (which typically require a lot of plastic packaging) and elevated hygiene needs (think of all the HDPE bottles of disinfectant and other hygiene products that are wrapped in LDPE/LLDPE films before they are delivered). In December, very sadly, demand for hygiene products was likely to have increased because of the new outbreak of the pandemic in China.

I therefore believe that there will be little, if any, need for adjustments for excess inventory to get to the actual 2020 demand figures, meaning the growth in 2020 apparent demand should be very close real growth.

The risks for demand this year, though, seem to be building, with the outlook worsening a little since I last looked at the Chinese PE market just three weeks ago.

Do not fall into the obvious trap of only comparing Q1 2021 with Q1 2020. On a year-on-year basis, Q1 2021 is bound to be much, much better because of the nationwide lockdowns that affected China in February-March last year.

What will instead be much more useful will be a quarter-on-quarter comparison. I see some loss of economic momentum in Q1 versus the fourth quarter of last year, firstly because of China’s electricity shortages.

The shortages, which began in December 2020 and look set to last until at least February this year, are the result of the coldest winter since 1966, a lack of liquefied natural gas storage capacity and unseasonably strong exports of manufactured goods in December. The lack of electricity will obviously take a toll on China’s economic recovery, which has been mainly manufacturing and export-led

Local retail sales will, for the reason explained above, be much stronger in Q1 on a year-on-year basis.

But will this year’s first-quarter sales return to pre-pandemic levels, meaning Q1 2018 and earlier? Probably not because of the travel restrictions that have been imposed for the Lunar New Year holidays which run from 11 February to 17 February.

The restrictions are in response to the new outbreak of the pandemic. Many million fewer people will be travelling home to see their families than during a typical non-pandemic year, resulting in less PE packaging demand related to travel and connected with buying gifts for relatives.

Another risk to China’s PE growth is the rise in freight costs to and from China, the rest of northeast (NEA) and the West.

The roots of the problem go back to the Spring of 2016 when shipping rates for a forty-foot equivalent unit (FEU) container from NEA to northern Europe cost as little as $162.

This led to consolidation in the industry as alliances and shipping lines tried to avoid the fate of South Korea’s Hanjin, which filed for bankruptcy in 2017, according to this article in the Financial Times. Now just three alliances control 85% of the container traffic on the transpacific route and nearly all the shipping on the NEA to Europe route, the newspaper added.

Then came the pandemic. Lots of containers were left stranded in ports as lockdowns spread and demand for everything seized up. Next came the big demand recovery as we adapted to the pandemic and bought more laptops, tins of paint, rolls of wallpaper and personal protective equipment.

China has primarily supplied the extra demand, greatly increasing its already dominant shares in many global manufacturing chains. There is thus far more demand for shipping containers from China to the West, as compared with moving containers to China. As my colleague Tom Brown writes in this ICIS News article:

Shipments from Asia are being left with no product to load for the return journey, meaning that shippers either need to absorb the cost of a stock-free return journey or for vessels and containers to remain in port until full enough to head back to Asia.

This is causing delays, with the normal rhythm of global trade grinding to a halt and containers are less likely to be where they are needed. It is also leading to increased reluctance on both sides to commit to the long ocean journey when it is unclear whether it will be possible to bring the ship back.

The cost of shipping a 40-foot container from Asia to northern Europe had increased from about $2,000 in November to more than $9,000, wrote the FT.

The hope had been that factory closures in China during the Lunar New Year holidays (they officially, as I said, run from 11-17 February, but factories usually tend to be closed for longer to allow for travel) would have solved the problem. Reduced supply from China would have given container companies time to sort out the imbalances it had been hoped.

But factory closures will now be staggered, with some factories said to be not closing at all, in order to limit the number of people travelling to their family homes, thereby reducing the risk of a wider outbreak of the coronavirus.

Consolidation in the container industry also means that when the supply imbalances have been sorted out, freight rates may remain elevated as the sellers will retain a lot of selling power..

But we must also factor in the power of China. After a summer surge, freight rates from NEA to the US West Coast have stabilised at around $4,000/FEU, reportedly because of Chinese government pressure on freight companies to keep costs down. This same pressure might be applied to the NEA-Europe routes. China is said to be building lots more new containers to try and resolve the problem.

Clearly, the motives are strong for China and other manufacturing giants such as Japan, South Korea and Taiwan to solve the issue. Their recoveries from the pandemic have largely been export-led, with China the biggest beneficiary of the cycle out of some services and into more demand for goods. Here is a crucial statistic: as China’s exports boomed last year, leading to a rebound in GDP, the country’s local retail sales were still down by 3.9% compared with 2019.

I expect China will therefore solve the freight problem because it must do and because it has so much economic and political clout. But freight rates will probably not start to moderate until Q2, according to container-industry experts. This would mean a drag on Chinese petrochemicals and polymers growth until then.

Another example of the unbalanced world in which we live is the global shortage of microchips. This is the result of booming demand for game consoles and the rapid recovery in Chinese auto sales.

Western automakers have had to cut back on production. The shortage is expected to take six months to fix  and so will weigh on demand for the petrochemicals and polymers that go into the auto sector. To a limited extent, this is negative factor for HDPE demand, as it is used to make fuel tanks. Autos and auto components are also wrapped in LDPE and LLDPE. There are also the negative overall economic effects of auto plant closures and a fall in auto sales to consider.

China, as with the rest of the world, faces the “vaccine nationalism” challenge that I detailed on Wednesday. Global economic growth would be adversely affected by the failure to supply enough vaccines to poorer countries and a lack of a coordinated international debt-relief programme. This would damage China’s trade with the developing world.

Details of new scenarios for Chinese PE demand in 2021

The global PE market is very different from the markets for the petrochemicals and polymers that mainly go into finished goods, which are much more vulnerable to the supply chain issues described above. The reason is that most PE goes into daily essentials, such as food packaging, which is produced and consumed locally.

Also, because PE demand is so heavily skewed towards daily essentials that must be purchased regardless of growth in GDP, the demand for the polymer in China as elsewhere, has limited exposure to a vaccine-related crisis in the developing world.

What further limits the downside for PE is that Chinese consumption will continue to be supported by the secular shifts in demand I detailed at the beginning of this blog post. These include the rise in internet sales and greater hygiene needs.

Nevertheless, it is important to revise your scenarios for Chinese PE demand growth in 2021 in the light of recent events. Remember that a considerable percentage of PE consumption is dependent on manufactured goods, as it is used as protective wrapping for washing machines, laptops, refrigerators, autos and auto components, etc.

Hence, I have revised my outlook for Chinese PE demand in 2021 (see the above slide).

The chart on the left shows the previous best-case outcome, from early January, which assumed the same demand growth for HDPE in 2021 as last year (12%), the same for LLDPE (14%) and a rebound in LDPE to plus 5% growth, in line with long-term trends, from last year’s minus 3%My revised best-case outcomes see HDPE and LLDPE growth both falling to 10% in 2021 with LDPE growth at a positive 3%. Total demand in 2021 would reach 42.2m tonnes versus my previous estimate of 43.3m tonnes – a 1.1m difference.

I must again stress that these are my views only. For thorough, detailed, scientific scenario work, contact me at john.richardson@icis.com and I can put you in touch with our consulting and analytics teams. However, I do hope these thoughts help inform your thinking decisions. I shall, in later posts, look at revised outcomes for 2021 Chinese demand in other petrochemicals and polymers.