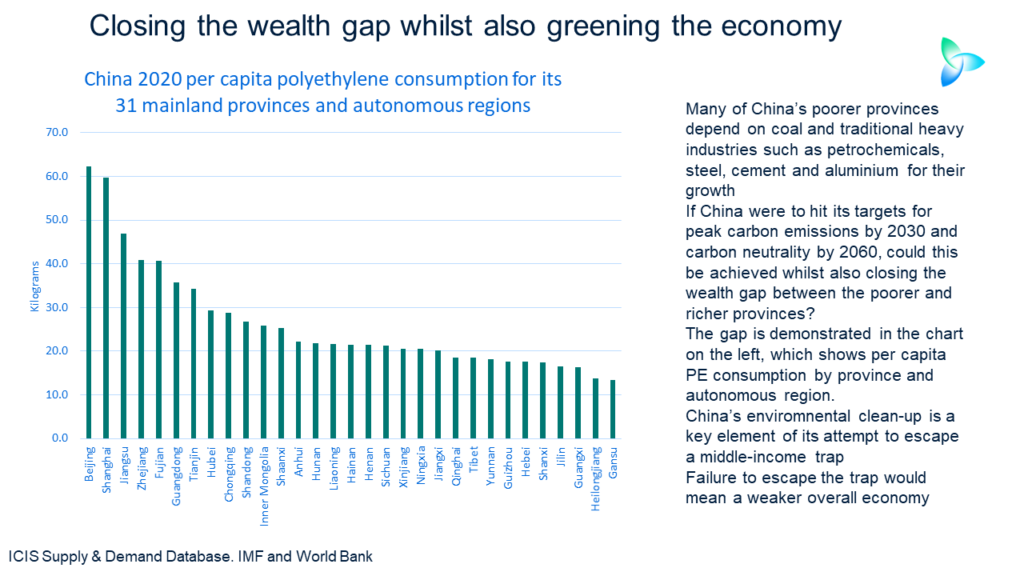 WE MUST develop very nuanced, broad ranging and constantly updated scenarios about what could happen in China over the next 20 years.

Special scenario teams need to be set up by petrochemicals companies that focus only on China because the country will remain by far the most important petrochemicals market.

China will continue to completely overshadow every other country and region in terms of tonnes of demand, demand growth and import and export flows.

This is no exaggeration and is not hyperbole but is instead what all the petrochemicals data tell us. We must always be led by the data.

And secondly, only scenarios are going to work because there can be one-size-fits-all answer to what is going to happen next in such a big and complex country.

The focus of much of our scenario work must be on government policy as this is so important for understanding China.

China is a very heavily government-led economy. Since 2012, China has been increasingly led from Beijing, from the centre. This was the year when Xi Jinping came into office.

Our scenario work will never be done as government policies will constantly fluctuate due to changes in short-term circumstances and competing priorities.

And whilst the centre has become stronger, the role of the provinces in shaping policy outcomes must also be a key part of assessments. The provinces retain considerable influence, as do many of China’s big companies.

Environmental policy: On the surface the direction is clear

Or you can just scratch the surface and complete the task of analysing China in a hurry. Let me use environmental policies as an example of corner cutting.

Last September, China announced that it was aiming for peak carbon emissions by 2030 and carbon neutrality by 2060. These were very significant announcements that took a lot of people by surprise.

I believe there are three headline reasons why the announcements were made.

Because the reasons represent such big almost existential challenges, the temptation is to think that “needs must” will apply.

You might conclude that China will find ways of clearing the obstacles simply because it has no other choice. “Forget the detail and instead focus on the big picture” could be your logic.

The first reason, or existential threat, relates to China’s middle-income trap, made deeper by a rapidly ageing population.

China needs to move up the manufacturing value to economically justify the higher wages resulting from an ageing population.

Green industries are by their nature higher value as they involve new and quite often breakthrough technologies.

China’s leaders have also made a major commitment to the people of China to clean up the environment.

Great progress has been made in improving air quality, but a lot more needs to be done to reduce soil and water pollution.

Geopolitics are the third reason behind the announcements.

President Trump was of course still in office last September. His administration had pulled out of the Paris climate agreement.

China therefore gained geopolitical ground with its announcements because of the global consensus that human activity is behind climate change. This was as I forecast would be the case immediately after the US pulled out of the Paris Accord.

The Biden administration has re-joined the Paris Accord and is planning a big domestic New Green Deal.

China may now feel that it needs to double down on its climate agenda because of the greater geopolitical influence the US could gain from the change in climate policies.

If the New Green Deal were to get through Congress, which in my view is a big IF, China could also face a stronger global competitor in green technologies.

I believe that green technologies will be a major driver of the next phase of global economic growth, provided we can resolve semiconductor and rare earth supply chain issues.

Has the job been completed then in the space of the last 442 words? Is this the one and only scenario you need?

Can we assume that China will lead the world in decarbonising its manufacturing industries, including petrochemicals through technologies such as blue and green hydrogen and electric cracker furnaces powered by renewable energy?

Is it also safe to plan for a huge growth in China’s plastics recycling industry as it leads the world in plastics and chemicals recycling technologies?

Can we expect the introduction of many more effective regulations that will greatly reduce China’s consumption of single-use plastics?

I believe the answers to all the above questions is “we simply don’t know” as there are far too many variables involved to start and finish at such a high level.

China and coal: an example of competing priorities

This New York Times article is a good starting point as we consider China’s competing priorities of economic growth and jobs versus the environment.

Without investments, economic growth will be stunted, especially in the provincial economies which are heavily reliant on coal, argue the project proponents.

They also contend that electricity generated by wind and solar will not be enough to meet China’s overall power needs.

In 2020, China built more than three times as much new coal power capacity as all the other countries in the world combined last year, according to this article in Energy Live News, quoting a survey by the San Francisco-based think tank, Global Energy Monitor.

The research also showed that 73 gigawatts of new coal power projects had been started in China in 2020, five times as much as in all other countries.

The plan promises expansions of hydro, solar and wind power in addition to nuclear power plant construction, the NYT added. By 2025, non-fossil fuel sources will provide one-fifth of China’s energy, says the plan.

But the plan does not include an absolute ceiling on annual carbon dioxide emissions and indicated that coal-fired power stations would continue to be built.

A challenge China faces is how to narrow income inequality and raise more people out of poverty whilst also fulfilling its green agenda. Income inequality increased last year as China recovered from the pandemic.

The South China Morning Post, in this article, reported that as exports boomed in 2020, income inequality increased.

“According to a joint nationwide survey of more than 70,000 households by Gan’s university and Ant Group Research, the income growth of households with annual incomes below yuan (Y) 50,000 was the slowest among all income groups,” the newspaper wrote.

“Those with annual incomes greater than Y300,000, the highest bracket, fared best, thanks to stable jobs and good investment gains,” added the SCMP.

During this year’s NPC, Li Keqiang, China’s premier, highlighted the need to address income inequality. He pointed out that 40% of the Chinese population lived on less than $5 a day in 2020.

China is likely to face further economic crises such as the one triggered by the pandemic. It could again confront the requirement to bolster growth at the risk of setting back its green agenda.

After declining during the first few months of last year, China’s emissions climbed because of big spending on infrastructure and industry and an export-led recovery, the same NYT article added.

“China’s greenhouse gas emissions increased by 1.7% in 2020 relative to the previous year, the only major economy to show a rise that year, according to the Rhodium Group, an economic research firm,” said the NYT.

The Financial Times added that soaring steel, cement and aluminium output in 2020 meant that China’s emissions rose by 4% during H2.

The newspaper said that China has long struggled to marry strong economic growth, especially during downturns, with reducing pollution.

Whilst the new Five-Year-Plan pledges to basically eliminate bad air pollution days by 2025, the FT added that China remained hesitant to force a quick transition to renewables energy.

The latest plan for emissions intensity – or the amount of CO2 produced per unit of GDP – is 18% by 2025. But this is the same target as during the last Five-Year-Plan, said the FT. 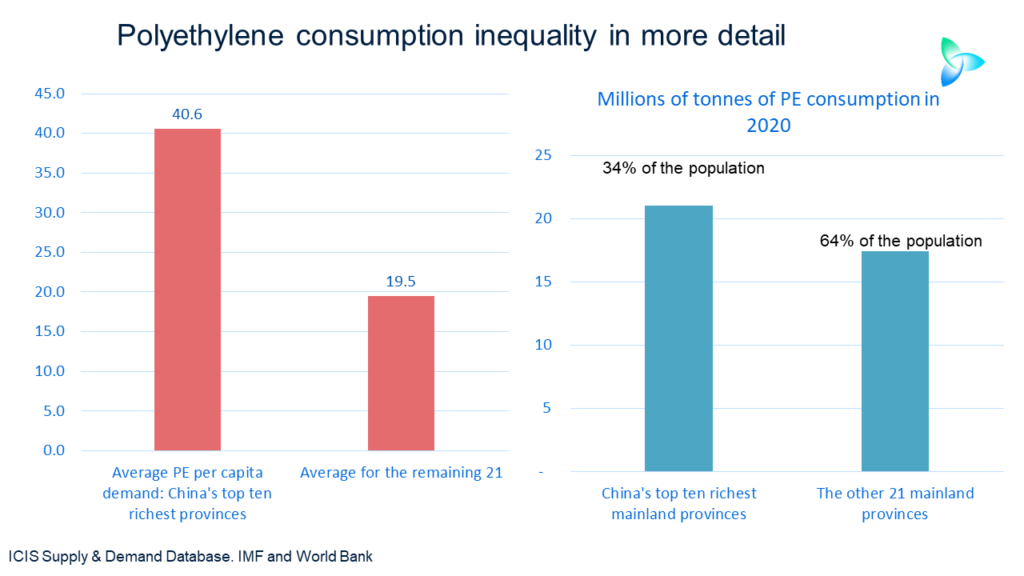 These days, instead of waiting for some out-of-date report to arrive by fax or even in the post, we can do internet searches to get so much of the data we need. As I said at the beginning, we must always be led by the data.

A few Google searches will tell you that 81.6% of China’s coal reserves are concentrated in just six provinces and autonomous regions – Shanxi, Inner Mongolia, Shaanxi, Xinjiang, Guizhou and Ningxia.

You can also find this useful map of where China’s coal mines are located. Many of China’s mines are in the provinces of Hebei, Shanxi, Shandong and Henan.

Also consider the large number of China’s provinces that are dependent on old, traditional heavy industries that create a lot of emissions, including petrochemicals, steel, cement and aluminium.

We can then go further by examining GDP per capita, measured in US dollars, for the 31 mainland provinces and other regions in 2020, using IMF, World Bank and Chinese government data.

We can go even further, using ICIS Supply & Demand data, and use these provincial per capita income levels to calculate what this meant for per capita polyethylene (PE) consumption by the 31 mainland provinces in 2020 (see the slide at the beginning of this blog post).

What you can see is that average PE per capita consumption amongst the ten richest provinces was 40.6 kilograms. This compares with just 19.5 kilograms across the remaining 21 provinces (see the slide at the beginning of this section).

Let us think of this in terms of tonnes of PE demand combined with estimates for China’s population across the 31 provinces. These forecasts again use ICIS IMF, World Bank and Chinese government data.

I estimate that the top ten richest provinces drove 21m tonnes of last year’s total PE demand of 38.4m tonnes across the 31 mainland provinces (again see the above slide).

This of course meant that the remaining 21 provinces accounting for 64% of the population drove only 45% of PE demand – 17.4m tonnes.

Just some of the implications of environmental success or failure

There are many, many implications of the success or failure of China’s environmental policies.

Success would involve China winning its geopolitical and technology struggles with the US and thus being the centre of a vast new geopolitical trading and economic zone.

This would result in the China-led zone dominating global petrochemicals demand and trade flows over the next 20 years. Failure would mean the opposite – a US zone dominating our industry.

Failure to escape the trap requires downside scenarios for China’s petrochemicals demand over the next two decades.

Can China square what could be a circle of escaping its middle-income trap and closing the great income divide between its rich and poor province?  Is it possible to close the regional income gap by greening the economy?

Or is the only viable route growing traditional heavy industries such as conventional petrochemicals, steel, cement and aluminium production processes. Will coal production also have to be maintained as many more coal-fired power plants are built?

We must build different petrochemicals demand growth scenarios for each of China’s provinces and autonomous regions.

As the data I have shown demonstrates, only focusing on the nationwide picture isn’t going to get you very far.

As a reminder, once we have broken growth down by province, we need to group China into four separate economic regions: the rich coastal and southern provinces, the up-and-coming provinces adjacent to the rich provinces, the northeast rust belt and poorer western China.

More fundamentally, of course, if China cannot achieve more equitable and strong economic growth through a green transformation of its economy, we need to consider the implications for global climate change.

None of this is easy. There are so many other variables that I have probably not even touched on. This article once again just scratches the surface.

But we cannot shy away from the challenge of a more nuanced, scenario-based approach to China.

Shying away from the challenge would leave us largely in the dark about could happen next in the world’s most important petrochemicals market.