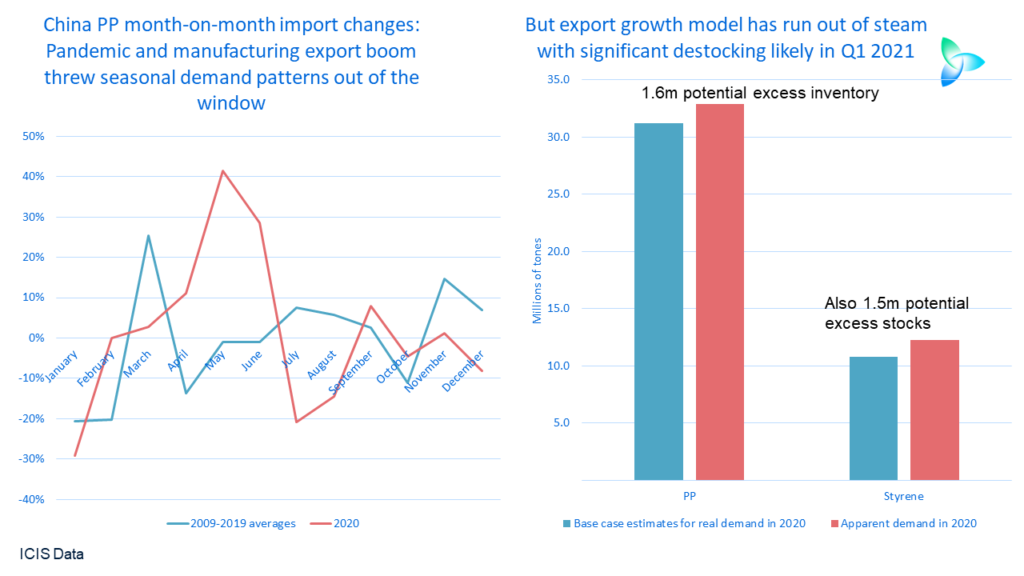 THE ABOVE chart on the left – showing average month-on-month percentage increases in China’s polypropylene (PP) imports in 2009-2019 versus the pattern in 2020 – underlines my argument that the production and export-led recovery that China enjoyed last year was part of a government plan. You can see the same pattern in styrene monomer (SM) and other petrochemical imports.

PP and SM imports in 2009-2019 were strong in March because of the end of the Lunar New Year holidays and the return to work of China’s vast manufacturing sector, the workshop for the world. But last year of course was different because the Chinese economy had come to a virtual standstill due to the pandemic. Imports therefore declined in March.

2009-2019 imports fell in April-July due to seasonally weaker demand. But not last year as China’s factories roared back to life, thanks to China quickly bringing the pandemic under control. This resulted in big increases in SM and PP imports during these three months in 2020.

Let me explain why…

As China’s factories came back online, factories in the West shut down because of the coronavirus. Western spending patterns began to change from May onwards, with much greater demand for goods such as laptops, washing machines, tins of paint and wallpaper as hundreds of millions of middle-class, cash-rich Westerners whiled away their time in lockdowns.

China found itself in a great position to take advantage because, as I said, firstly, Western factories were shut down and secondly, China already had dominant positions in many manufacturing chains because of strong “network effects”.

Such was the extent of the demand for China’s exports of manufactured goods that petrochemical imports also surged. Local traders also took advantage of cheap crude that led to lower-cost PP and SM.

In 2009-2019, imports increased in July and August during the peak manufacturing seasons, when China’s factories worked flat out to meet demand from the West for Christmas goods.

But last year there was no peak manufacturing season as manufacturing had already reached a peak, in response to pandemic-related demand. This also included personal protective equipment, another global market that China dominates. Face masks and hospital gowns are made from PP.

2020 therefore saw falls in PP and SM imports in July and August because of overstocking.

September-December PP and SM 2020 import patterns also diverged from the long-term trends of 2009-2019, most notably in December, when, instead of imports increasing ahead of the pre-Lunar New Year manufacturing push, they declined.

You might conclude that the December 2020 declines in PP and SM imports merely pointed to a year when the usual seasonal demand patterns went out the window (we can expect much the same in 2021).

A more bearish outlook for this year

But here is the thing as my general outlook for Chinese petrochemicals demand in 2021 turns a little more bearish: China’s PP net imports (imports minus exports) over the full-year 2020 versus 2019 increased by an eye-wateringly high 27% to 6.1m tonnes. SM net imports increased by 9% to 3.4m tonnes.

Domestic PP production increased by 10% in 2020 to 26.7m tonnes; local SM production was 12% higher at 8.8m tonnes. Put this together (see the above chart on the right) and you end up with:

These mismatches would have been less of a problem if it had not been for China’s new pandemic outbreak, local shortages in electricity and global container freight and microchips shortages. But from December, all the above problems emerged, which are, I believe, the real reasons why SM and PP imports declined last December.

PP and SM price direction wasn’t a reason for weaker December imports, by the way, as during that month pricing was more or less stable.

None of us know the true extent of China’s new pandemic outbreak because of the lack of reliable data, nor how the outbreak might spread during the Lunar New Year holidays, which run from 11-17 February. We are equally in the dark, if you can excuse the pun, over how long electricity shortages will last.

But we are on more solid ground when it comes to the container freight and microchip shortages. Tightness in container supply isn’t likely to ease until Q2 with the shortage in microchips expected to last six months.

If China cannot find enough containers to maintain its stellar export growth, this will be bad news for China’s PP and SM markets during at least the Q1 2021. And for SM the microchip shortage is an added problem because its derivatives are heavily used in consumer electronics.

Consider this as well: as China’s exports boomed, the real decline in its local retail sales during 2020 was 4.8% rather than the official 3.9%, according to China Beige Book, the independent China data analysis service. In other words, China’s 2020 recovery was even more dependent on exports than most of us thought.

You should therefore expect significant destocking in PP and SM to weigh on imports during at least Q1 this year with overall domestic demand likely to weaken versus Q4. This year’s Q1 will, though, still likely look very good versus Q1 2020 because in February-March last year, China’s economy came to a virtual standstill.

It is easy to do the maths. If our estimate of real 2020 demand is accurate this would leave 1.6m tonnes of PP overstocking to be carried through into this year. SM overstocking wouldamount to 1.5m tonnes.

I realise the tone of my blog posts on China has changed over the last few weeks, but when the facts change so must  anyone’s analysis.

Also, it seems clear that the Chinese government’s policy approach of last year needs adjusting as Beijing cannot rely on continued strong export growth. A further threat to exports is the point at which we reach peak laptop, washing machine and wallpaper demand as these are only occasional purchases.

Another danger is the time when the West gets on top of the pandemic because of vaccination programmes. As life returns to something like normal, there will be a cycle out of demand for some goods and a return to services, such as hotels and airlines.

China needs to, I believe, focus its policy attention on stronger domestic growth, to make up for that 4.8% real decline in retail sales. I will consider the policy options in a later post. But suffice to say here, given China’s track record, you wouldn’t want to bet against the government getting a policy shift right.