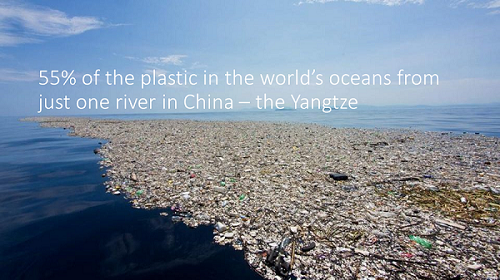 IT IS hardly surprising that a hot topic of discussion amongst chemical company CEOS gathered for the American Chemistry Council’s annual meeting in Colorado Springs, the US, was the threat of trade wars.

As I have long argued, there is more than a 50% chance that we will end up in a global trade war, triggered by the US, because of President Trump’s long held views on trade. This would of course lead to a global economic recession.

In the long term, we will end up in a much more fragmented world. Globalisation will go into reverse because of the further rise of populist, anti-free trade politics.

There is a link here with the plastics rubbish crisis. Because the middle and working classes in the West face reduced economic opportunities resulting from ageing populations and automation, the focus will be on “doing more with less” – how to make better use of resources.

During the Babyboomer era of unparalleled economic prosperity, this didn’t matter as affordability wasn’t an issue. We lived in the ultimate throwaway society. There also wasn’t the same awareness of the environmental damage being done by plastic waste.

The link with the rise in protectionism is that plastics recycling has to be local in order to to be economic and environmentally sustainable.

Dealing with the economic issue first, it is not cost effective to move bulky waste plastics long distance. What instead makes sense is small integrated recycling complexes next to landfill sites, which are also close to where the waste plastic waste is collected.

As plastic recycling increases, this will very obviously reduce the demand for virgin polymers. This will cut global trade flows of virgin resins. And, as I have just explained, the very nature of the recycling business lends itself to local-for-local manufacturing value chains.

Europe can become entirely self-sufficient in polyethylene (PE) and polypropylene (PP). So can China, either by itself or through a combination of its own recycled and virgin resins capacity and through imports from fellow Belt and Road Initiative countries.

The growth of the emerging world middle classes fallacy

“But hold on,” I can hear you say, “your argument about moving plastic waste long distances just doesn’t stand up.

“China, ever since the 1980s, has been absorbing most of the West’s rubbish in general – paper and aluminium etc. as well as plastic. And now it has restricted imports, countries such as Indonesia, Vietnam and Malaysia are taking bigger volumes of rubbish.”

Indonesia, Vietnam and Malaysia do not have the recycling capacity capable of absorbing the same volume of the West’s contaminated plastic waste that China used to absorb.

From a corporate responsibility/ethical standpoint, surely it is wrong that the West should still seek to move its plastic waste problem “out of sight and out of mind”.

The West should instead be dealing with its plastic waste problem at source, where it is created, by boosting local recycling. Public and legislative pressure to deal with waste problems locally is going to build and build.

Further, the pushback against plastic waste is occurring not just in developed markets but also in developing markets such as Indonesia. As the South China Morning Post writes:

In Indonesia, the world’s second biggest plastic polluter behind China, 3.2 million tonnes of plastic is dumped in the ocean every year, according to a 2015 study by US-based Jambeck Research Group. The country consumes more than a million plastic containers per minute, half of which are single-use items.

Not surprisingly, therefore, Indonesia, as part of its goal to reduce plastic marine debris 70% by 2025, is experimenting with ways to turn plastic waste into asphalt and energy.

With these goal in minds, why would Indonesia, or any other developing country for that matter, want to take ever-growing volumes of plastic rubbish from the West? It is not logical. It is also worth remembering that China has restricted imports of rubbish because of the negative health impact on its recycling workers. The same will apply to alternative destinations.

Sorry to insult my imaginary reader, but I am afraid that this is utter nonsense. The reason is the kind of initiatives I’ve just described in Indonesia.

Here is another example. India yesterday hosted the UN Environment Day, with the UN’s the theme for this year “Beat Plastic Pollution”. To mark the event, India announced that it plans to ban all single-use plastic by 2022.

But the killer statistics that entirely undermine my imaginary reader’s arguments are contained in this article from The Verdict, the UK-based news and analysis site:

China can thus help solve the majority of the world’s plastic waste problem. In so doing, it would gain a great deal of international kudos, whilst also developing state-of-the-art recycling technologies that will help it escape its middle-income trap.

You must, as a result plan for recycled single-use plastic becoming 20-30% of total Chinese consumption, perhaps even more, over the next 10-15 years. For PE, this undermines the model of building a new cracker-PE complex overseas to serve the China market.

For polymer producers who export to China, the data on China’s role in global plastics pollution create a reputational challenge. Any reputational gain companies make from being better local recycling will be lost if they keep exporting big volumes of virgin resin to China.

The upshot for the petchems industry

Not all plastic is single use, of course. But 56% of PE is single use and around a third of PP. Polystyrene and polyethylene terephthalate (PET) resin consumption is also heavily driven by throwaway plastic items.

As demand disappears for virgin polymers, so will the old business model. Regional markets will make building new world-scale petchems complexes to serve export markets a redundant approach. Investments in coastal complexes will be replaced by smaller, inland local recycling sites next to landfills.

Existing crackers will continue to operate. But they will be reduced to the role of providing top-up quantities of virgin resin for single- use applications, where demand cannot be entirely met through recycled material.

The only unanswered question is time. How long will it take for these changes to happen? Ten years, 15 years or more? The nature of the speed of adoption of modern technologies suggests that the more conservative we are about the timeframe, the more likely we are to be wrong.

And anyway, companies spend several billion dollars on a steam cracker complex on the basis that it will still be running in 50-60 years. So, even 15 years is just around the economic corner.