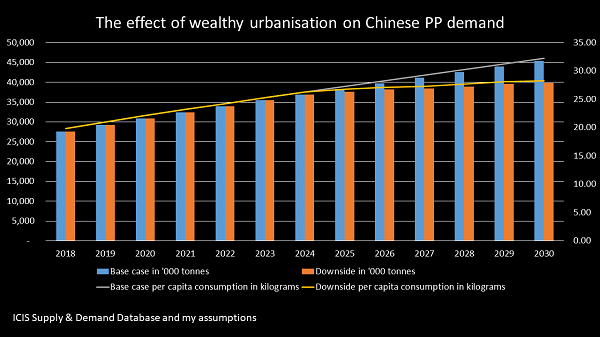 LAST month I gave you the downside of urbanisation in China and how this could result in 7m tonnes of lower polyethylene (PE) demand in 2030 than we assume in our base case.

A very good contact of mine has however pointed out this fascinating article from the World Economic Forum on how further urbanisation may do exactly the opposite to PE and other polymers consumption growth.

He accepted that the direction of urbanisation highlighted in the WEF report would be unlikely to do anything for China’s income inequality challenge – in fact, further growth in already super-rich urban centres could make the problem worse.

But he added that China was well on the way towards creating a middle class that would be middle class by Western standards in terms of income levels. This middle class will also be several hundred million in size – the biggest of anywhere in the world, and much richer on a per capita income basis than its Indian counterpart.

He agreed that petrochemicals growth in the West would continue to weaken on ageing populations and the caution, pessimism and greater environmental consciousness that this is generating. And he added that anti-immigration policies would make it difficult for the West to renew itself by importing sufficient numbers of young people.

One Chinese urban centre is 45% of Spain’s GDP

“But in China I see things differently. What China has created are rich and big urban centres that will attract the brightest and the best from around the world. These have become super consumption zones for petchems and future growth prospects are tremendous,” he said.

The WEF article says that in 2010, China’s State Council identified three major urban clusters as launch-pads for smart urbanisation: the Yangtze River Delta (YRD), the Pearl River Delta (PRD), and the Beijing-Tianjin-Hebei cluster (BTH). By 2014, the PRD had morphed into the Greater Bay Area (GBA), covering nine cities around the PRD in southern Guangdong, plus Hong Kong and Macau.

A recent HSBC report said that these urban clusters had a GDP greater than that of Spain, and that in total they would account for 45% of China’s total GDP by 2025.

The GBA in particular seems to be the star performer as China tries to escape its middle-income trap. It has a high concentration of high value companies such as Tencent, Midea, and Huawei, generates more than 50% of China’s patent applications and is less burdened by inefficient state-owned enterprises than other regions of China.

The GBA has also benefited from preferential loans from state-owned banks – the kind of government-backed lending that helped rebuild Europe after the Second World War and led to many decades of strong economic growth in the West.  The same applies to every other region of China.

As an aside, this suggests to me that China has a very good chance of beating the US in an economic and geopolitical battle that is set to last decades. Whilst China will stick to its strategy of using the state to support innovation, the US will continue to see greater misallocation of capital than in China because of the inefficiencies of the US financial markets-driven economy.

Back to the main point. My contact accepts that as people get richer in the GBA, and other major urban centres, environmental issues will become more and more important.

The Chinese public and legislative pushback against single-use plastic will in the long-run dampen PE consumption growth, he says. First, though, will come an explosion of further PE demand growth as super-rich urbanites buy ever-greater quantities of goods over the internet. Those goods will of course need to be packaged and the packaging will very often be made from PE.

I can see his point. When you are working 15-plus hours for a high-tech start-up company, you are cash rich but time poor. Mobile internet sales as result make a lot of sense. You will have little time or energy to worry about the cost or environmental impact of your purchases.

He adds that in the case of polypropylene (PP), which is less exposed to the single-use plastics challenge, the sky remains the limit for demand growth in China. Fifty six percent of PE globally goes into single-use applications compared with only one third of PP.

“Car ownership will continue to rise very rapidly, as will purchases of all the other durable goods made from PP,” he said.

This is not necessarily the case, China has the potential to lead the world “less is more” in its super-rich urban centres. Here is my alternative scenario.

As people get richer they become more environmentally conscious. There are no logical reasons to think why this will be any different in China than in other parts of the world.

Big volumes of PP go into transportation. This mean that the ever-richer Chinese and all the emigrants will increasingly prefer not to own cars in major urban centres.

There is not just the environmental factor. Why spend hours and hours stuck in traffic jams when you are time poor because you are working 15-plus hours a day in a high-tech start-up?

Chinese government funding will pour into ride hailing and car sharing services. China has the chance to lead the way in these industries as it tries to escape its middle-income trap. These new vehicles will also be autonomously driven and electric rather than gasoline-powered.

Individuals will thus be less interested in owning cars as government funding makes hiring an autonomous vehicle when you need it a very viable alternative to car ownership. Chinese local and central governments will also legislate against car ownership in big urban centres in order to reduce pollution and congestion.

And as the GBA and other urban zones continue to develop, ever-better bus and train links will further reduce the need to own a car.

One third is also still one third. As the public pushback against single-use plastic builds this will destroy future demand growth for PP in packaging applications. This will again be strongly supported by Chinese government investment in the domestic recycling industry and in legislation that restricts the use of virgin PP in packaging.

Also think about being time poor but cash rich and the humble washing machine, which is made from polymers including PP. Rich urbanites, often young and single, will use laundry services, hired via their smartphones, rather than own washing machines. Per capita growth in washing-machine ownership will slow down in China.

The end-result is the alternative scenario in the above chart:

This further underlines how we are living in an ever-more complex world. Plain vanilla over-simplistic scenarios for petrochemicals and polymers demand growth are as a result not good enough, as they will fail to adequately prepare your business for the future.