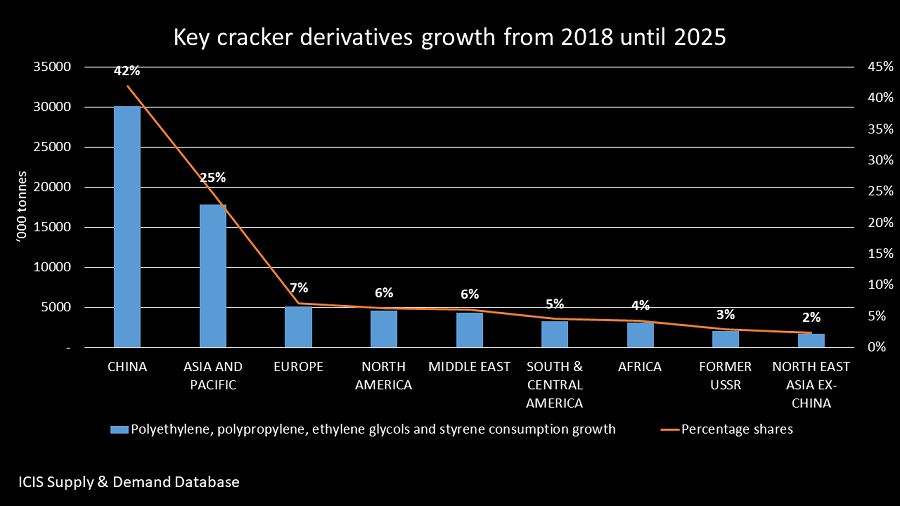 JACK MA, the founder of Alibaba, said of the US/China trade war, “It’s going to last a long time, maybe 20 years. It’s going to be a mess. It’s not a trade war, it’s about competition between two countries.”

I believe that the world is set to be split into two trading blocs, one led by the US and the other by China , which will be one key result of the 20-year competition referred to by Ma.

Do not assume that the status quo will return if President Trump isn’t re-elected in 2020. His approach to China is popular amongst Democrats.

And for some recently announced projects both boxes will be ticked, placing them in a strong position. Long before a trade war seemed likely to most people came announcements of a wave of cracker and derivatives projects by oil and gas majors. These of course have access to competitively priced raw materials.

The projects will, I believe, also benefit from being built in the right places both because of the redrawing of global geopolitics and being close to the centre of demand growth. The future is all about the developing world due to the maturity of markets in the West.

Take a look at the above chart as an illustration of this latter point. It shows the global growth of four key cracker derivatives – polyethylene, polypropylene, polyethylene glycols and styrene between 2018 and 2025. It is of course growth that matters because it is growth that’s the basis for new investments:

The role of China’s deficits will also be crucial. China’s net imports (imports minus exports) will total around 30m tonnes in 2018-2025 for all of these four major cracker derivatives. This will be 52% of the global total.

The rise of the oil majors in petchems

Earlier this year came the announcement of major investments by Saudi Aramco in India and in Saudi Arabia. Saudi Aramco, ADNOC and various Indian partners have agreed plans for what would be a $44bn refinery-petchems  project at Ratnagiri in the Indian state of Maharashtra.

Aramco and France’s Total have signed an agreement for a cracker and derivatives project that would make use of liquids and off-gas feedstock from the pair’s SATORP refinery in Jubail in Saudi Arabia.

Aramco and SABIC are pursuing what has been described as an oil-to-chemicals project in Saudi Arabia. This would in effect be a refinery heavily focused on providing feedstocks for petrochemicals. As my colleague Nigel Davis wrote in this ICIS  article in April:

From what we know, a 400,000 bbl/day crude distillation and vacuum unit would supply a hydrotreater, a vacuum gas oil hydrocracker and a residual fluid cracking unit to produce petrochemical feedstocks and final products and about 200,000 bbl/day of diesel for domestic use. The complex will include a mixed-feed steam cracker, polyethylene, polypropylene, butadiene and aromatics units. It may well utilise Aramco’s oil to chemicals technology although it does not seem as though it is necessarily being configured to do so.

Part of the logic for these projects is declining gasoline and diesel demand growth on the rise of electric and hybrid vehicles and the improvement in fuel efficiency in standard internal combustion engines.

But both India and Saudi Arabia are in the China-led Belt and Road Initiative (BRI) region – as well as being ideally located to serve booming demand in the developing world.

Lotte Chemical Titan’s 1m tonnes/year cracker and derivatives project also appears to be on the right side of geography as it is located in Indonesia, which is also in the BRI.

Last week Lotte dismissed rumours that the $3.5bn project was stalled by announcing that it was in the final stage of front-end engineering and design.

Chandra Asri Petrochemical is due to complete a feasibility study by the end of the year into what would be its second cracker complex in Indonesia, Thai shareholder Siam Cement Group (SCG) also announced last week.

Already confirmed is another SGC investment in Vietnam. The Long Son Petrochemical’s project, which SCG acquired 100% ownership of earlier this year, is expected on-stream in 2023.

Hitting markets sooner will be output from the RAPID refinery-petrochemicals complex in Malaysia. RAPID due on-stream in 2020.

I could go on and on. For instance, ADNOC and Borealis have major expansion plans in Abu Dhabi via for their Borouge subsidiary.

Both Malaysia and Abu Dhabi are BRI members.

In South Korea, GS Caltex is planning a 700,000 tonnes/year mixed feed cracker. Whilst South Korea has close military and economic ties with the US, and as yet not a BRI member, South Korea moving closer geopolitically and economically to China cannot be ruled out.

Some countries may attempt to straddle both of the world’s two new trading blocs.

PREVIOUS POST China's time poor, cash rich will want less PP and not more
NEXT POST US styrene another petchems sector at risk from trade war