Back in October 2014 the sharp fall in oil prices had yet to benefit Asian polyolefins producers as they struggled to deal with a slowdown in the Chinese economy resulting from reduced lending.

Wind the clock forward to October of this year and producers were facing high oil prices and once again a slowdown in lending availability in China. This was combining with the negative effect on sentiment resulting from the US/China trade war.

You can argue, as John Kemp does in this persuasive Reuters article, that oil prices have reached a cyclical peak and will edge down over the next year.

Equally, though, a major geopolitical crisis or a collapse in financial and commodity markets could mean oil well in excess of $100/bbl or below $40/bbl over the next 12 months.

You need to plan for all these three oil price outcomes.

Extreme oil price and so naphtha feedstock cost uncertainty could occur during what I believe will be a global recession in 2019 on an acceleration in the US/China trade and Cold War war.

The global recession will also be triggered by the global economy hitting a wall of debt as interest rates continue to rise and as economic stimulus is withdrawn by all the major central banks.

Unlike in 2009, there will be no major coordination between the world’s central banks to limit the impact of the recession because of a.) The animus between the US, the rest of the West and China and b.) Competing political objectives within the EU.

The Asian PE industry will struggle to absorb the big increase in US production – especially if the US cannot export to China.

Smaller import markets such as Indonesia and Vietnam could end up being flooded by US material, with other major importers such as Europe and Turkey also under pressure. LLDPE will see the biggest US production increase in 2019, and so it is in this polymer where oversupply pressures will be the greatest.

Major shift in ethylene markets may also be a threat 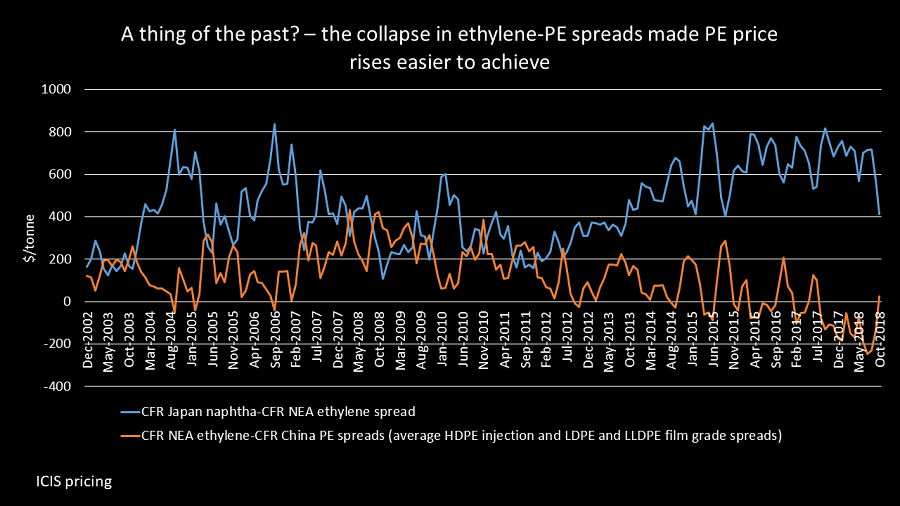 The above chart shows the big change in Asian ethylene and PE markets from 2012 onwards (the chart only shows Northeast Asian ethylene prices and China PE prices, but the pattern is exactly the same in Southeast Asia).

But from January 2012 until October this year there was a remarkable turnaround. Naphtha-to- ethylene spreads soared to $548/tonne with ethylene-to-PE spreads at just $32/tonne. And quite often, as the chart illustrates, ethylene-PE spreads were negative.

This reflects a very tight Asian spot ethylene market (the ethylene prices above are spot only). This has benefited PE producers because of the following:

The last few weeks have seen a collapse in Asian spot ethylene prices and thus spreads over naphtha. This has been the result of Middle East ethylene derivatives shutdowns while associated crackers have continued to run.

Some industry sources tell me that the Asian spot ethylene market will be longer over the next year as a result of increased deep-sea shipments. If this is correct then Asian PE producers will no longer be able to use high ethylene costs to justify increases in PE prices.

It is going to be a difficult 2019. Just how difficult depends on the extent to which polyolefins producers ignore the conventional thinking and plan for the new recession. Prudent feedstock purchasing strategies are clearly key, as are sensible sales growth targets for PE and PP.

So is positioning yourselves to take advantage of what looks likely to be a major shift in global trade. If the US is excluded from China over the long term, China will need to buy from elsewhere to meet its huge PE import needs. PP may, however, disappear as an export opportunity to China.

The task for Asian polyolefins producers isto manage their businesses carefully during the recession, to preserve cash, to minimise losses, while building stronger relationships with China, ready for when the recovery arrives.