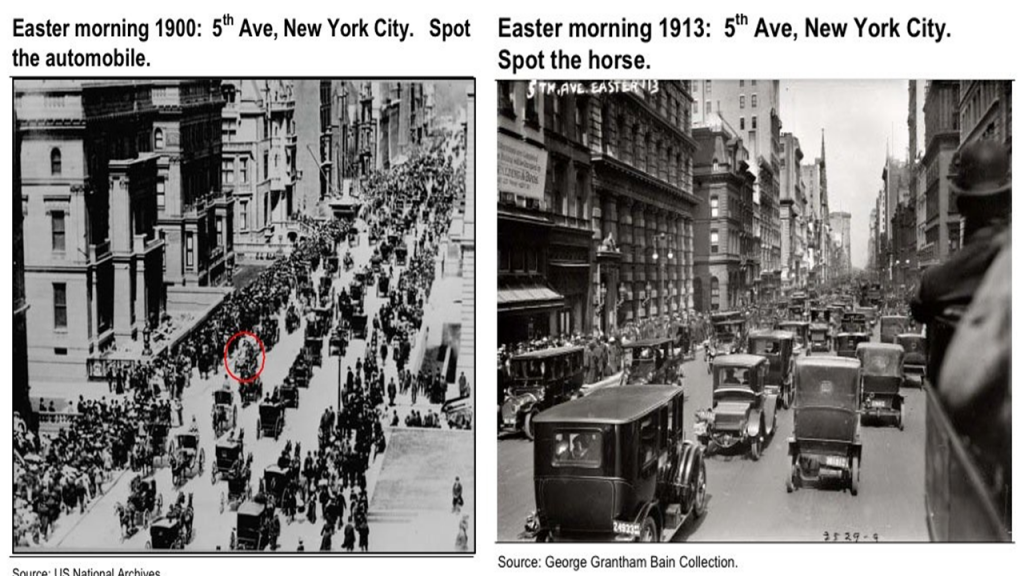 THE PICTURE on the left shows the Easter Day Parade in New York in 1900. As you can see, the parade is  almost entirely made up of horse-drawn vehicles, bar the red-circled auto.

In that year there was a horse manure crisis in the world’s major cities with the attendant problems of flies, health risks and the dreadful smell. In New York alone, 1,134 tonnes of manure was deposited every day by 100,000 horses.

Wind forward to Easter Parade 1913 and look at the picture on the right. Horse-drawn carts have all but disappeared thanks to the rise of motor vehicles.

Gone is of course the problem of horse manure. But ahead for New York and the rest of the world are wars, military coups and other forms of regime change that will be triggered by the quest for oil.

Meanwhile, the pollution from automobiles and the rapid rise in the number of road accidents will add to the human cost of the internal combustion engine.

The fossil fuel-powered car will also be a major contributor to climate change that threatens to make large parts our planet uninhabitable. 21st Century wars will be fought over the consequences of climate change – e.g. water shortages and flooding that displace tens of millions of people.

An excess of horse manure doesn’t in retrospect seem such a bad thing.

The nature of capitalism

In just 13 years’ time, the New York Easter Day Parade will largely be bereft of internal combustion engines because of the rise of electric vehicles. Only a small number of people will travel to the parade by their own car as autonomous-driven vehicles will dominate.

Those who dismiss this as technologically impossible should consider the nature of capitalism.

Capitalism loves an opportunity and the opportunity for autos companies is to cash-in on growing concerns over air pollution and climate change. And the autos companies know that if they have fail to adapt they will disappear, as previous waves of innovation have taught us.

There is also a huge amount of money to be made by auto components manufacturers. They again know if that they fail to adapt they will be out of business.

Politics is another factor. Apart of the current White House administration, nearly all the rest of the world’s governments recognise that climate change is man-made. Public opinion is firmly behind the science of man-made climate change.

And think of the millions of people who die prematurely every year from air pollution and road accidents. That’s a huge cost to governments and a source of growing public anger.

We must as a result assume wave after wave of new legislation that supports electric vehicles and autonomous driving.

The flawed nature of forecasting

“We search for statistical properties of a time series that are constant in time–levels, trends, seasonal patterns, correlations and autocorrelations, etc. We then predict that those properties will continue to look the same in the future as they do today,” wrote Kehlog Albran in his 1974 book, The Profit.

Exactly. During last week’s GPCA Forum in Dubai, I heard that electric vehicles would be held back by current battery technologies, and that autonomous driving would be restricted by the inability to gather and process sufficient data to predict all road conditions.

But battery costs keep falling with lithium-ion batteries down by 80% since 2010 as their storage and recharging capabilities constantly improve.

We need to assume that the lithium-ion battery may not be dominant technology of the future.

There are ethical concerns about the cobalt needed to make these batteries as most of the world’s cobalt comes from the Democratic Republic of Congo. It thus seems reasonable to predict that super capacitor batteries will win the day. They use other raw materials such as activated carbon and can be instantly charged unlike lithium-ion batteries.

It would be equally wrong to assume that autonomous driving will not accompany the rise of electric vehicles.

Hundreds of millions of working and leisure hours are being lost through sitting in completely pointless traffic jams. The economic loss represents a major opportunity for innovators.

So does the carnage on our roads. More than 1.25m people die every year in road accidents, according to the World Trade Organisation, and that number will carry on rising as people in the developing world get richer – unless there are major breakthroughs in autonomous driving.

Think of this from the perspective of governments. They will fund the capitalists who develop autonomous driving in order to reduce healthcare costs.

We will, I am sure, reach the point where insurance companies will say, “OK, so you want to drive your own car? Here’s the cost.” The cost will become prohibitive for most people because we make too many mistakes and shouldn’t be driving cars if there are better alternatives. Properly programmed computers won’t make any near as many mistakes.

On the data issue, the speed with which artificial intelligence is developing means that mapping all the data points necessary to navigate road conditions will not be a barrier. China will lead the way because of its big population, its government’s ability to fully capture vast amounts of day and government funding for innovations in autonomous vehicles.

Implications for the chemicals industry

The problem is that chemicals companies are seeing an opportunity upstream without assessing the threat downstream.

They see the rise of electric vehicles as unlocking lots of oil that can be used to make chemicals and polymers instead of gasoline and diesel. This explains big investments being made by oil and gas companies in new refineries heavily configured to make chemicals feedstock, and in new steam crackers etc. This was a key theme of last week’s GPCA Forum.

But, as I have said, demand destruction will be as big downstream in auto sales as it will be upstream in gasoline and diesel.

I am convinced that in a much shorter time than most people imagine, the world of transportation will have been completely transformed by the rise of electric vehicles and autonomous driving.

Let’s look forward to Easter Day Parade in New York in 2031 and a much brighter future for our small, blue and very fragile planet.

PREVIOUS POST G20 meeting: stakes are high for US petchems, manufacturing in general
NEXT POST G20 trade deal is no deal unless a huge gap can be bridged