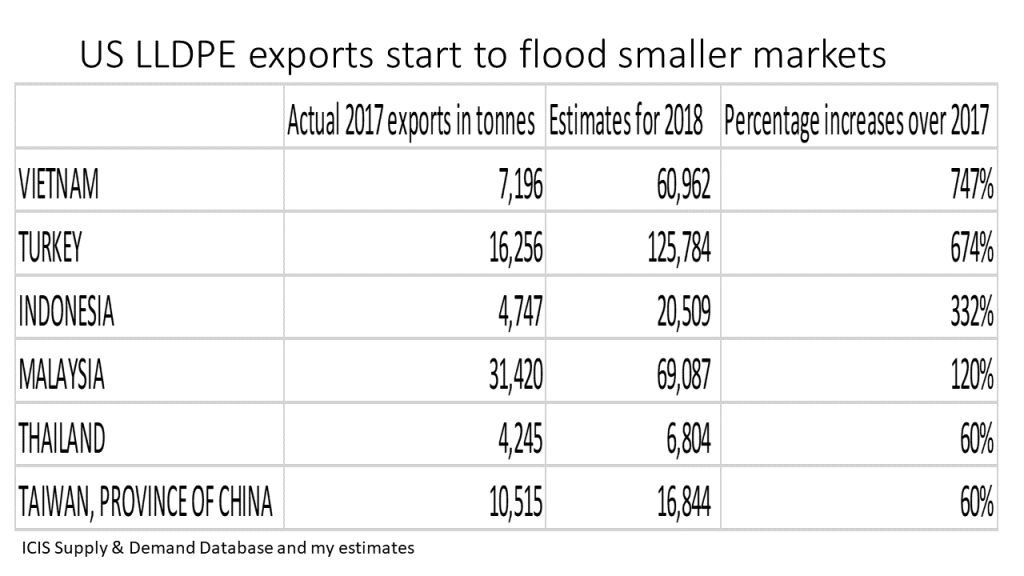 THE ABOVE table illustrates the 2018 impact on smaller LLDPE markets of the arrival of big volumes of new US production.

Big percentage increases such as these can be misleading when they are from very small bases.

But look at it from this angle: Vietnam, Turkey, Malaysia, Thailand and Taiwan, province of China, are very small markets when compared with China. If you add our 2018 estimate of these countries’ consumption together it comes to just 3.1m tonnes. Compare this with China’s 11.1m tonnes of expected demand.

To some extent, the rise in US shipments to these smaller countries is the result of the rebalancing of markets. The rebalancing is in response to the 25% tariffs China has imposed on US LLDPE cargoes since late August last year:

But this isn’t the whole story. Many countries that have negligible import demand have also made major export gains in China this year. For example, South Korean exports to China look likely to increase by 51% in 2018 over last year to 292,922 tonnes.

This is the result of the surge in Chinese demand for LLDPE resulting from the heavy restrictions on imports of scrap PE for environmental reasons. There has also been strong growth in consumer spending, even though spending has dipped over the last few months because the Chinese economic slowdown.

This is reflected in China’s overall LLDPE import data. In January-November 2018, imports were up by 22% over the same period last year to 3.6m tonnes. And despite what seems to be overstocking, November imports were up by no less than 95% compared with October.

US exports to China collapse 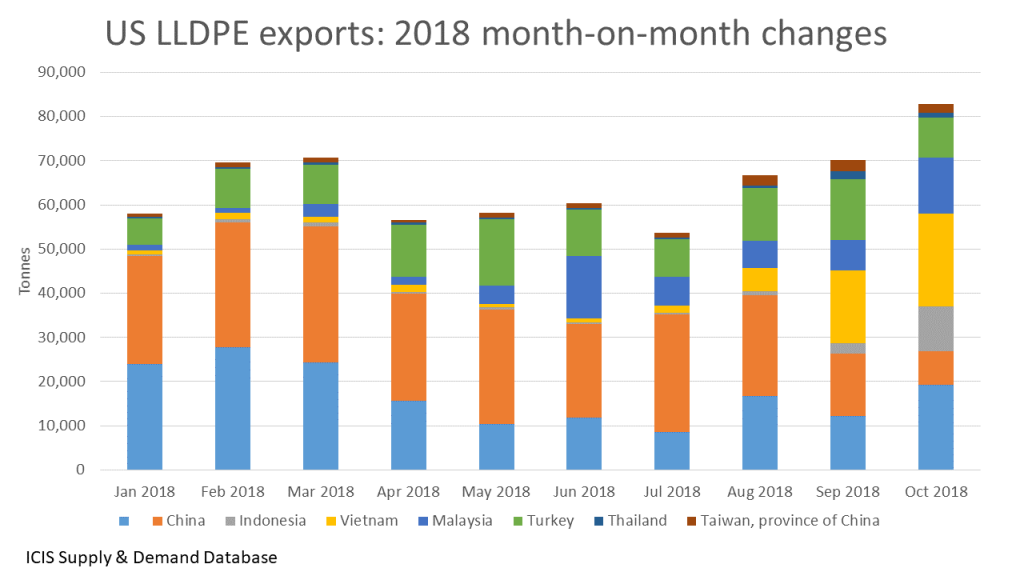 Now take a look at the above chart. This shows the month-by-month pattern of US exports to the same five destinations listed in table at the beginning of this post , and also China.

What you are seeing is a big dip in US exports to China from September onwards as the tariffs started to bite.  US producers have attempted to make up for this dip by raising exports to other the other destinations:

US exports to Turkey have been rising all year which is partly down to the reluctance of Turkish buyers to acquire Iranian because of renewed sanctions. In 2018, Turkish imports of Iranian material look set to fall to 61,789 tonnes from 91,798 tonnes in 2017 – 33% lower.

But overall Turkish imports are likely to be flat compared with 2017. This would follow strong growth in 2017 over 2016. This indicates that the US will have probably made big gains in Turkey over Iran and other importers as demand growth has slipped on a weaker Turkish economy.

There is a very good chance that the US/China trade war will continue, which would mean the tariffs on US LLDPE remaining in place.

The Chinese economy could already be in recession because of the largely unrecognised slowdown in lending. A Chinese recession would very probably result in a global recession.

Would US LLDPE producers cut back on production in response to a fall in global LLDPE demand? Probably not as they have a strong feedstock cost position and many are integrated upstream into natural gas production

I therefore believe that new US plants will continue to run very hard, despite a weak demand environment and despite the inability of the US producers to export to the key China market.

So expect not only Southeast Asian (SEA) and Turkey to be flooded by US LLDPE in 2019-2020. The same will apply to Europe, which is the world’s second biggest import market behind China.