Environmental taxes on US polyethylene shipments to the EU seem inevitable 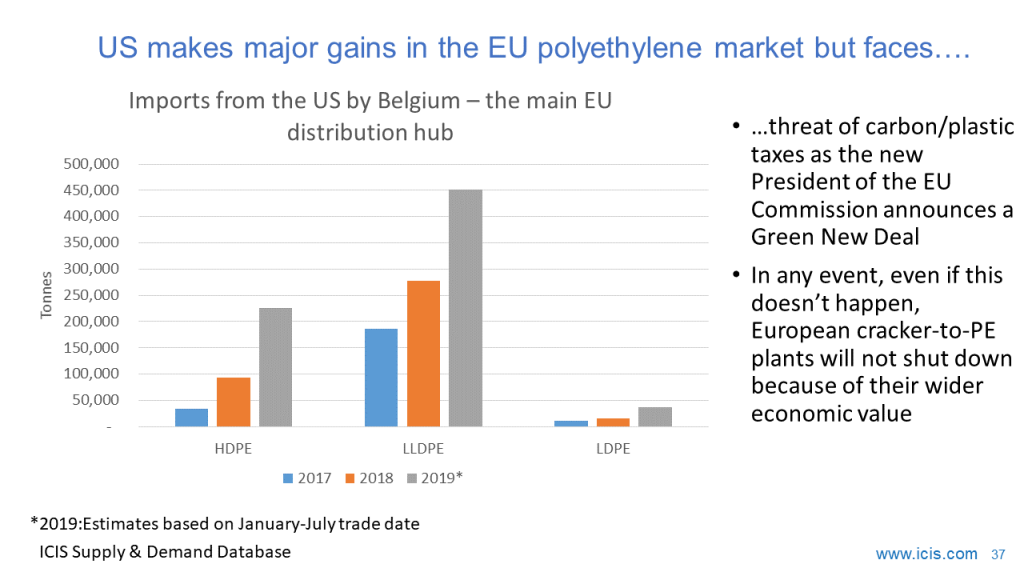 IT ALL seemed to make perfect sense at the time. Feedstock and financing were incredibly cheap and trade barriers kept falling. Although there were some faint and distant public rumblings about plastic rubbish, most of the public and the majority of legislators were not bothered about the issue. The global economy was also in a very healthy condition.

The end result was the huge increase in US polyethylene (PE) capacity which began to arrive in markets in 2017. In the case of linear-low density PE we are a long way from the peak of US production increases a time, of course, of rising concerns over plastic rubbish, a US/China trade war and a weakening global economy.

This has created an environment in which something will have to give. Either older plants elsewhere will have to shut down or US producers will have to take costly decisions about what do with their new facilities. The conventional view, based on cost-per-tonne economics, is that the former will happen – older and less efficient plants in Europe and Asia will have to be shut down.

The trouble with this view is that it is not supported by history. For more than ten years now, mainstream analysts have been forecasting that older European crackers would have to close. Some capacity has been shuttered, but not as much as had been expected.

“The South Korean crackers will shut down because their economics are not good enough,” I was told by a US petrochemicals industry executive in 1998 during the Asian Financial Crisis. The South Koreans quite rightly prefer to call it “The IMF crisis” because of the daft economic policies the IMF imposed on their country.

No South Korean cracker has shut down. Capacity has instead been expanded. In China, older crackers don’t go away. They are instead upgraded through constant expansions that effectively turn them into new crackers. The only country in Asia that has idled capacity is Japan. It has closed a small number of crackers because of their age.

What is wrong with the conventional approach of it only looks at the cost-per-tonne economics of cracker-to-PE plants and misses the wider economic, social and political context in which the industry operates.

My view is that history will repeat itself. Crackers in Europe and Asia will not shut down, forcing US producers to make some very difficult decisions about their new plants whilst also cancelling new investments.

Further, as I detail below, US PE producers could face heavy environmental taxes when shipping to the EU as result of the EU push towards a Circular Economy.

What would then to US PE exports to Europe, which, as you can see from the above chart, have substantially increased in 2017-2019?

European crackers and the wider context

“No man is an island entire of itself; every man is a piece of the continent, a part of the main,” wrote the wonderful poet, John Donne. The same applies to European cracker-to-PE complexes.

Firstly, they are often fed by naphtha and other refinery feedstocks supplied by local refineries. Shut the cracker down, the refinery has nowhere to place its naphtha and is also threatened with closure. If a refinery goes then so does local gasoline, diesel and other fuels supplies, leaving regional economies exposed to the much higher cost of importing fuels.

Because the European crackers are mainly liquids crackers, and so make big volumes of co-products, they support downstream industries wider than just PE processing. There are the centre local economic eco-systems of synthetic rubber plants and polypropylene (PP) compounding plants for auto production etc.

Where would BMW auto component suppliers get their high quality co-polymer PP from if the local cracker complex shut down? In autos it is not easy to switch suppliers because the auto makers have very specific quality demands. It can take years to get approval to supply a components manufacturer which supports one of the major car makers.

This is why European cracker operators will continue to enjoy whatever support they need from the legislators, who are aware that closures would jeopardise local fuel supplies and a great many jobs across a wide swathe of downstream manufacturing industries.

The elephant in the room: Carbon/plastic taxes

Don’t say I didn’t tell you. In August, I predicted that the traditional PE cost curve would be upended by taxes on plastics.

Taxes would, I said, be based on the extent to which PE pellets had been made from mechanically or chemically recycled polymers, together with the degree to which CO2 and methane emissions had been controlled during production and shipping.

I also believed and still believe that taxes will be levied on how much producers have re-designed packaging to boost recyclability.

Taxes, or perhaps instead credits that can be traded, will also be based on the extent to which producers take responsibility for the final disposal of their plastic pellets  Producers will be at a major disadvantage if they make pellets which then make plastic films etc. that are dumped into rivers and oceans.

I suggested in my 23 August post that the EU would lead the way on these tariffs or taxes. Since then, the results of the EU elections have made new environmental taxes on plastics much more likely. As the October edition of the excellent PH Report says:

The new EU Commission takes office next month in Brussels. And it will definitely not be “business as usual”, due to the change that has taken place in the political composition of the European Parliament as a result of May’s elections.

The report adds that the two main centre parties, Conservatives (EPP) and Socialists (S&D), can no longer combine when necessary to gain a majority. Instead, because they rightly refuse to work with the far-right/populist parties, they need Renew Europe/Greens support. Inevitably, therefore, the new Commission’s agenda will change quite significantly from the Juncker era.

The new European Commission President, Ursula von der Leyen, has made the direction of travel very clear. During her confirmation hearing before the EU Parliament, she said:

““I want Europe to strive for more by being the first climate-neutral continent. The message from Europe’s voters – and those too young to vote – is loud and clear: they want real action on climate change and they want Europe to lead the way…

“I will propose a European Green Deal in my first 100 days in office. This will include the first European Climate Law to enshrine the 2050 climate-neutrality target into law.”

I am with the PH report in its view that this will inevitably lead to carbon taxes on all imports arriving in the EU, including PE.

US PE cargoes could face levies based on estimates of “fugitive” or accidental methane emissions from the natural gas production upstream of the new steam crackers. Even though methane doesn’t linger in the environment as long as CO2, it is 84 times more potent a greenhouse gas then CO2.

US cargoes also have to travel a long way to get to Europe. Further penalties might be levied based on the carbon footprint of transportation.

And as the EU pushes towards a Circular Economy, European PE producers are likely to face taxes of hundreds of Euros per tonne under extended producer responsibility (EPR) schemes. They will need to mitigate these taxes by investing in chemicals and mechanical recycling.

It would be entirely illogical, therefore, for local producers to face these penalties without similar levies on imports.

The European producers are making substantial investments in chemical recycling in particular where major commercial breakthroughs are expected within the next three years, thanks to the pressure from the EPR schemes.

The US is in a very different position in that it has built, as I said, big new PE plants, based entirely on virgin hydrocarbon feedstocks. They seem likely to find themselves at a competitive disadvantage to their European competitors, once new carbon/plastic taxes are factored in.

The end result could be that the US will have to either stomach high import taxes or divert cargoes away from the European market. Chinese tariffs on US high-density PE and linear-low density, which have been imposed as part of the trade war, are already making it difficult for the US to export to China.

If the trade, technology and geopolitical wars between the US and China continue, I can see a situation where China will quite simply decide not to import any US PE. Further, if it pulls most of Asia and some of Africa into its economic orbit, China might encourage these regions to do likewise through establishing a largely self-sufficient giant free-trade zone.

I could be wrong of course. It has been known. But I have always been on the money in highlighting that it is wider economics, politics and social factors that determine how this industry behaves –and not just cost-per-tonne cracker-to-PE economics.