Yes, I know I promised to focus on Asia and its cracker-to-PE industry today and how the region will not see shutdowns that will make way for the big increase in US production. This will still be a theme of a later post. But it occurred to me, after my post on Sunday, that I had only covered half the story about why European cracker-to-PE plants will not shut down. Here is the other half of the story. 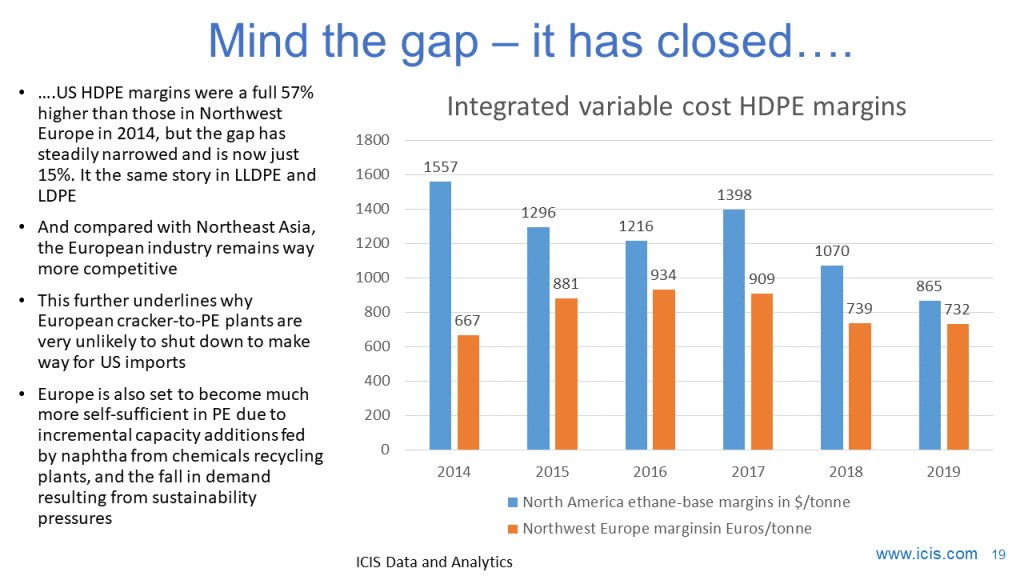 YOU MUST always start with the data and our margins data do not support the notion that a considerable number of European crackers and their associated polyethylene (PE) plants will have to shut down to make way for vast, and I mean vast, US oversupply.

On Sunday, I looked at the wider economic, social and political context within which European cracker-to-PE plants operate and concluded that these factors would result in very few, if any, closures.

The political and social context includes an EU Green New Deal which is likely to result in environmental taxes on imported PE. The taxes would of course protect local producers from US imports.

But, as I said, cost-per-tonne analysis of the PE business – the ICIS margins data – also supports the notion that reports of the death of the European PE business have been wildly exaggerated.

The big shift in oil prices

When the new US capacity was sanctioned by boards of directors we lived in a world where the natural price of crude was thought to be in the region of $100/bbl. This was the case during 2014 before the collapse in crude towards the end of that year.

In a very high oil price environment, PE prices have to go much higher in order to reflect expensive oil. This is because some 70% of global PE production is via refinery-based feedstocks, mainly naphtha.

Ethane-based PE producers are price takers rather than price makers as they are the marginal supplier.

Naphtha-based PE producers always struggle in an environment of rapidly rising oil prices because naphtha is of course driven by the cost of crude.

There is a strong case to be made that we are moving into a world of abundant oil, barring periods of geopolitical interruptions in supply.

We used to talk about peak oil supply, the famous Hubbert Peak. Now the conventional view is that we are heading towards peak demand.

So, why given, that we could be in a world of oil prices permanently below $50, should anyone shut a European PE plant down?

A key comparison is with Northeast Asia where, because of a much more pronounced collapse in PE pricing, margins have fallen far more steeply than in Europe.

Let’s just look at HDPE as an example. Northeast Asian integrated margins in 2019 are at $158/tonne, 49% lower than last year. This compares with, as I have just a 1% fall in Northwest Europe and margins of $732/tonne.

Northeast Asian HDPE prices are 21% lower than last year compared with an 11% decline in Northwest Europe.

This tells us that the structural differences between the two markets are once again helping to support the European industry.

There is less competition in Europe than in Asia in general, and Europe is on the whole better integrated than Asia because superior pipeline links and better refinery-cracker integration.

Ever since the pretty much existential shock of the Global Financial Crisis, the European cracker business has been very good at market discipline.

Breaking the usual rule that high operating rates equal strong profitability, European PE capacity utilisation has been quite low since 2008 but returns have been good.

One other area where Europe has gained ground over the US is utility costs that are 22% lower at our average Northwest European cracker in 2019 versus 2014, compared with a 15% fall in the US.

And as we all know, most European crackers are liquids crackers and thus generate far more co-product credits from producing propylene, butadiene and aromatics etc. than their US competitors.

The basis for our Northwest European margin assessments is a theoretical average-sized European cracker buying in naphtha.  But not all crackers in Europe buy naphtha – some are integrated through to refineries under the same ownership.

Feedstock flexibility is also very common. Refinery products that have a low value in the fuels markets are often cracked as alternatives to more expensive naphtha.

Also consider the debt position of Europe versus the US. Most of the European cracker complexes are more or less fully depreciated as they are very old.

This means high maintenance costs – or at least it should mean that if the right investments are being made in maintenance.

But these costs pale into insignificance versus the big debts US producers have very recently incurred to build their big new plans.

Europe loses out in economies of scale to the US. Many of the European crackers are smaller in scale to the recent US start-ups.

But the absence of debt means that, even if market conditions were to get much more, the European crackers could just about justify their existence by running at are only slightly above variable costs.

Not so the US producers which have to pay back their lending. They have also made major promises to shareholders based on market conditions that are a lot worse than they had expected.

Our standard margin analysis is also only for commodity grades. This doesn’t take into account Europe’s heavy focus on higher-value grades where margins are obviously better.

In fact, the bulk of European PE business is done in non-commodity grades – for example, higher alpha olefins LLDPE where brand owners depend on qualified local suppliers.

Dropping European suppliers in favour of importers would be risky decision to take because of the danger of changes in consistency.

The spot offers that have recently flooded the European market are mainly from traders with material from US producers who have no assets in Europe – and the material is mainly commodity grades.

Europe to de-globalise as a result of sustainability

Back to the critical issue of the EU New Green Deal which is being driven by the new President of the EU Commissioner.

There has also been an important shift in EU politics that has given the green parties a lot more influence in the European Parliament.

The EU’S Extended Producer Responsibility Scheme involves local taxes on virgin plastics which can be offset by producers based on the extent of their investments in chemicals and mechanical recycling.

The EU is not going to disadvantage the local PE industry. I therefore see carbon/plastic taxes on PE imports as inevitable.

The new US investments are entirely based on the Old Normal way of making PE from virgin hydrocarbon feedstock.

US cargoes also have to come along way to Europe, thereby resulting in high levels of C02 emissions during transportation.

High environmental import taxes will place the US at a competitive disadvantage. This will quite possibly entirely wipe out their current cost-per-tonne advantage over Europe, provided oil prices remain where they are today or further decline.

I believe that the European PE market will become much more regional and largely self-reliant. You might think this is a stretch given today’s big volumes of European PE imports. But:

The conventional view is that this is just a normal industry cycle that will right itself in a couple of years or so.

No. PE demand will, as I said, be permanently lost as a result of the plastics rubbish crisis. Ageing populations around the world, including in China, promise weaker long term economic growth as the great debt binge of the post-Global Financial Crisis decade winds down.

The rise of populist politics, not just in the US, promises a permanently more fractured world as trade barriers increase.

Trade barriers will not, though, just be driven by the populists as the example of what is likely to happen as part of the EU Green New Deal illustrates.

PREVIOUS POST Environmental taxes on US polyethylene shipments to the EU seem inevitable
NEXT POST Asian polyethylene shutdowns? Once again, good luck with that idea