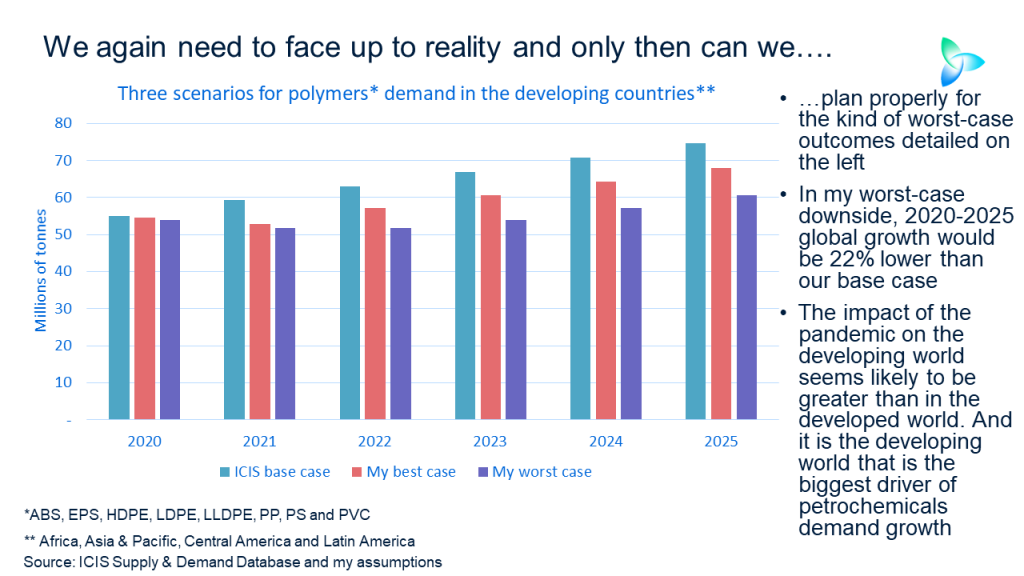 THIS IS a tragedy in the genuine sense of the word, not just in the so-often misused sense of the word : a study earlier this year by the United Nations University said that as many as 580m additional people could be pushed into extreme poverty by the pandemic, or about 8% of the global population. Extreme poverty was defined as living on less than either $1.90, $3.20 or $5.50 a day, the three international definitions. This is less than many of us are used to spending on a cup of latte or a slice of cake.

On the issue of cake and the infamous comment that allegedly belonged to Marie Antionette, bread and rice, never mind cake, might soon be in shorter supply in the developing world. Closely read this Financial Times article by Rana Foroohar. She details how larger banks may be forced to pull out of funding second and third-tier agricultural companies, because of increased capital adequacy requirements that are being compounded by funding pressures created by the pandemic. She warns that this could lead to higher market concentration and thus further food-price inflation over the next few months.

The greater market concentration would be the result of the failure of smaller agricultural distributors and farmers being unable to source funds to hedge against fluctuations in food prices. This could have knock-on effects on other businesses, including packaging, manufacturing and transport. The financial sector may be exposed to a “giant iceberg” of securitised debt just beneath of the surface of markets, according to Rana Foorohar.

Another important FT article, this time by Lyric Hughes Hale, editor-in-chief of the consultancy, EconVue, talks of the counter-intuitive food price inflation that has already taken place during the pandemic. The rise in food costs seems counter-intuitive as the fall in oil prices should have made food cheaper. The US has also seen bumper corn and soya harvests.

The problem lies with countries such as Russia and imposing export restrictions during the pandemic. Food importing countries have stockpiled reserves. Some food producers have not been able to distribute what they have grown because of the collapse of the restaurant trade. Food has, as a result, been thrown away. Political unrest is hampering food distribution. I believe that as the pandemic enters its next phase, political unrest will increase.

Lyric Hughes Hale said that inadequate food supply was often the result of distribution rather than quantities, a historic case in point being the economist Amartya Sen’s work on the causes of 1943 Bengal Famine. During the famine, an estimated 2.1m–3m, out of a population of 60.3m, died of starvation, malaria, and other diseases aggravated by malnutrition, population displacement, unsanitary conditions and lack of health care.

Inadequate food supply and food-cost inflation caused by the pandemic led the UN Committee on Food Security to warn that the number of people dying from malnutrition would this year double. Oxfam predicted that by the end of 2020, 12,000 people would die from hunger every day. Those facing acute food insecurity in 2020 would nearly double to 265m people, said the Centre for Strategic and International Studies.

It is not just the developing world that is facing food shortages. In the US, for instance, as of the end of July, 29m people, 11% of US adults, said that they sometimes did not have enough to eat, according to a report commissioned by the Food Research and Action Center. This was nearly three times the level three years earlier. But the focus here is on the developing world as hunger is a bigger issue among low-income nations. Further, governments in the developed world are in stronger positions than their developing-world counterparts to fund food-relief programmes.

Some of the recent news on remittances has been positive. For instance, there was a 7.8% year-on-year increase in money Filipinos sent home from their jobs overseas in July. But Philippine remittances were still down by 2.4% in January-July. The improvement in July may also be under threat from renewed lockdowns in the West, where the disease is a long way from being brought under control.

Political pressure to release a vaccine soon is strong, but there is a risk that an early release will be counterproductive, warns the medical journal, The Lancet. Their concern is that the rush to get a vaccine out will lead to the first version only providing low levels of immunity. The false sense of security that the vaccine could create might then lead to a big reduction in social distancing and use of face masks, thereby increasing the incidence of coronavirus.

The chances that we will get a highly effective and globally distributed and administered vaccine within the next year are, I believe, slim. The economic and logistical challenges of making sure every villager in Africa and India receives the vaccine are on a scale we have never confronted before. Adar Poonawalla, chief executive of the Serum Institute of India, one of the world’s biggest vaccine manufacturers, warned that there would not be enough doses of vaccine available to inoculate everyone in the world until the end of 2024 at the earliest.

Another risk is vaccine nationalism. We have already seen rich-world countries ordering large quantities of vaccines even before they have come onto the market. It is easy to imagine governments with limited resources being at the back of the queue.

It is easy to imagine the outcome: A bifurcated world as travel restrictions ease and economic growth improves across the developed world because of effective vaccination, whereas the developing world ends up isolated from the global economy due to vaccine shortages.

Other problems for the developing world include a sharp fall in immunisations against other diseases during lockdowns. Globally, progress on immunisation has been set back 25 years in the space of just 25 weeks, according to the 2020 issue of the Bill and Melinda Gates Foundation’s Goalkeepers report. Poorer countries are suffering the most from an inability to immunise people from preventable diseases such smallpox, as these countries often have weaker healthcare systems.

Last Wednesday, the number of coronavirus cases in India had exceeded five million. The US and India are now the only two countries in the world where this has occurred. The crisis in India points to another problem confronted by the developing world: because so many people live on the margin, where they have to work every day to provide food for their families, there is a risk that lockdowns are eased too soon in order to get these people back to work. This is what appears to have happened in India.

Add all of this together and it is not surprising that the Asian Development Bank (ADB) warned that Asia’s developing economies would in 2020 shrink for the first time in six decades. Developing economies across Asia would on average show negative GDP growth of 0.7%, said the ADB. But it did predicted that the economies would see average 2021 growth of 6.8%. This assumes, though, that all the problems I have identified above will by next year have been mainly addressed. I see this as highly unlikely.

We now need to consider the impact on petrochemicals demand in the developing world.

Now let’s look at our 2020-2025 base case demand for these eight resins in Africa, Asia & Pacific, Central America and Latin America (note that China is not included in Asia & Pacific as it falls under our northeast Asia region). Our base case sees a 3% decline in 2020 growth followed by 8% positive growth in 2021 and a 2022-2025 average growth of 6%. Like the ADB prediction of a strong recovery in Asian developing countries’ GDP in 2021, our base case presupposes that all the problems I’ve identified above will by next year have been pretty much addressed.

The evidence on the ground, from my conversations with contacts, also suggests that on an individual country basis, the problems in 2020 might be deeper than we assume in our base case. In Indonesia, for instance, we are this year forecasting a 1% decline in demand for the resins, while my contacts are forecasting an 18% fall in demand for all polymers.  Our prediction for India is a 7% decline, whereas sources suggest a more significant fall. Our 7% decline is also based on negative GDP growth of 5.8%, but the ADB now expects India’s GDP to contract by 9% in 2020. Clearly, the stronger the contractions are across the developing world in 2020, the greater the cumulative effect on demand in subsequent years.

So, let us look at our 2020-2025 base case for Africa, Asia & Pacific, Central America and Latin America in detail and compare this to my two downsides (also see the above chart):

I must stress, as always, that these calculations are for demonstration purposes only and do not represent proper forecasts. We can help you with thorough, detailed scenario work for these critical petrochemical markets. If you are interested, contact me at john.richardson@icis.com.

Now let us consider what my guestimate downsides would mean in the global context. My best-case downside would see global growth in 2020-2025 fall by 10% compared with our base case; the worst case would see global growth decline by 22%. The big global sensitivity to events in the developing world reflects that it is these markets, along with China, that are providing most of the global incremental growth, as of course markets in the West are mature.

As the great poet T.S. Eliot wrote, “humankind cannot bear very much reality” and so your instinctive reaction might be this is far too pessimistic. But pessimism isn’t the same as realism, and, in my view, a realistic assessment of developing markets suggests that they will take a long time to recover from this crisis.