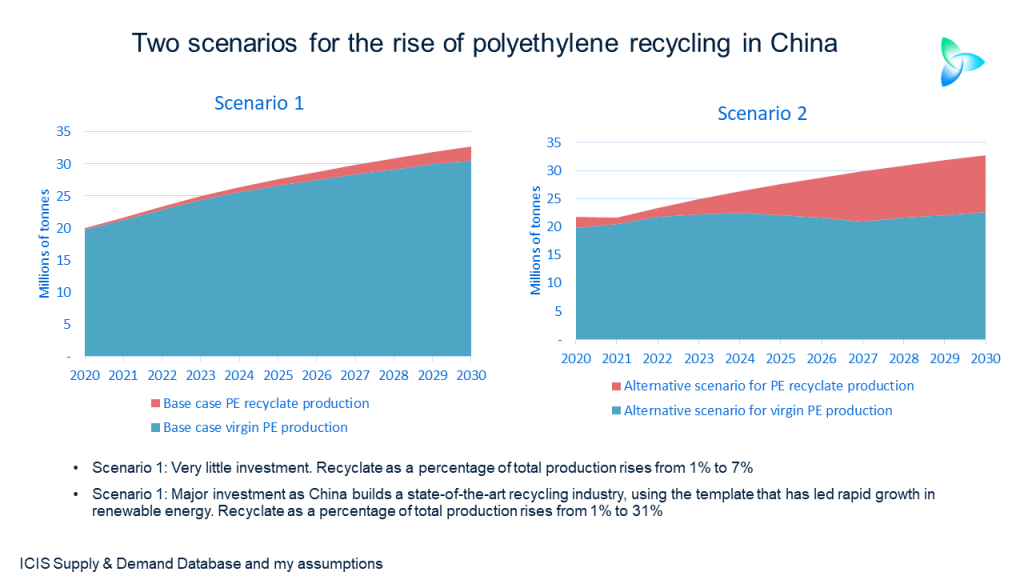 THIS EVENT slipped under most people’s radar in the midst of the pandemic crisis: on 10 July, multiple provinces across China (we don’t know which provinces and how many provinces) were told to submit plans by mid-August on how they were going to implement a central government crackdown on plastic waste.

I reported in January that China was set to introduce a raft of rules on restricting the use of single-use plastics, some of which were to be implemented this year. Then, as the pandemic struck, it appeared as if the measures had been put on the backburner.

Not so, according to the South China Morning Post, which wrote that by the end of this year a ban will take effect on the production and sale of disposable foamed plastic tableware, straws and plastic cotton buds.

And, as mentioned above, the provinces have had to explain to Beijing how they are going to implement the rules. Before Xi Jinping became president in March 2013, the provinces were largely able to ignore rules set by the centre. Not today as a result of Xi’s increased centralisation of political and legislative control.

The wording of the legislation suggests a big boost in demand for biodegradable polymers such as polylactide polyhydroxyalkanoates , polycaprolactone and polybutylene succinate. The plastics break down through composting into fertilisers, carbon dioxid

But biodegradable plastics don’t always break down in the environment that easily and thus can still result in plastic litter problems. When they do break down easily, they can generate methane – a greenhouse gas that is 84 times more potent than carbon dioxide.

As with all developing industries, the economic, logistics and technology challenges of scaling-up biodegradable plastics to allow China to fully implement its new legislation would be significant. New investments, though, often chase big opportunities.

But despite what might be significant new investments in biodegradables, we shouldn’t be misled by the wording of the legislation. I see implementation of the rules also involving big government investments in mechanical and chemicals recycling. I believe China will adopt a holistic approach – any combination of approaches that solves the problem.

Because of the progress being made on chemicals recycling technologies, I see this as likely to be a big area of focus for China. China already has numerous plants that convert plastic waste into low-grade diesel fuel. What could happen next are major government-funded investments in modern chemical recycling plants, located next to landfills, that convert plastic waste into fuels and naphtha for steam crackers.

One of the advantages  claimed for chemicals recycling is that it can require less separation of waste into different polymers when compared with mechanical recycling. But China may, I believe, also invest billions of dollars in mechanical recycling. I could be wrong, of course. But it seems logical to me.

As I’ve been suggesting since last year, big government spending on solving China’s plastics-rubbish problem could be part of the next five-year-plan, China’s 14th, which runs from 2021 until 2025. Further details of the plan are due to be announced at the Chinese Communist Party’s Fifth Plenum, which is due to take place in October.

China’s reiteration of its plans to go ahead with major restrictions on the use of single-use plastics suggest that we could see some major announcements on waste collection and recycling during the plenum. These announcements may only be policy headlines with the details firmed-up before next March’s National People’s Congress, the annual meeting of China’s parliament.

The scale of China’s plastic waste problem is gargantuan. Again according to the South China Morning Post, which quoted a University of Oxford study, China will account for 26% of global plastic waste by 2025, the biggest percentage of any country. Of the 63m tonnes of plastic waste China generated last year, only 30% was recycled. A further 31%, however, was burnt to create energy, according to the China National Resources Recycling Association. Burning waste to create energy in more sustainable ways may also be part of China’s solution to its waste problem.

Recycling is a major opportunity as well as a problem for China. Between $80bn-120bn of global economic value is lost every year because of low rates of recycling, according to the World Economic Forum. And China is of course the world’s biggest oil, gas and polymers importer and is thus vulnerable to geopolitically driven supply interruptions and cost increases. Making use of local plastics waste to reduce this import dependency makes sense.

Creating a state-of-the-art globally competitive recycling industry would also fit in with China’s attempts to escape its middle-income trap. There is a proven template here. In China’s 12th (2011-2015) and 13th (2016-2020) five-year plans it announced plans to heavily invest in another high-value industry – renewable energy.

The Economist wrote: China now produces more than 70% of the world’s solar modules. It is home to nearly half its manufacturing capacity for wind turbines. It dominates the supply chain for lithium-ion batteries, according to BloombergNEF, controlling 77% of cell capacity and 60% of component manufacturing.

I see no reason why this pattern cannot be repeated in recycling. In 5-10 years, China may end up with a 70% or so global shares in chemicals and mechanical recycling technologies.

Why? Because of the investment model it so successfully employed in renewable energy. As a strategic planner at a global petrochemicals company told me (I am paraphrasing here): How it works is like this: the government effectively says to a group of entrepreneurs, ‘Here is a large sum of money to invest in your sector. Only one of the  start-up companies will be successful, but we’ll write-off the debts of the companies which fail. The successful company will make a fortune, and the employees working for the companies that fail who are any good will be given jobs in the successful company.’

With this kind of state backing nobody loses. Instead, it is just a question of how much each player wins.

As usual, my alternative scenario, presented in the chart above, is just for demonstration purposes. But, given the huge reliance of the global polyethylene (PE) industry on China as a source of global demand and imports, if anything like my estimations came true the global consequences would be very big.

This obviously  also just covers one polymer. Polyethylene terepththalate resins, where recycling is well established, will be the subject of a later post. So will polypropylene, which, like PE, is at an early stage of recycling development.

Our base case sees a slight increase of recyclate as a percentage of total Chinese PE production from 1% this year to just 7% in 2030. This would leave virgin production at 30.5m tonnes and production via recyclate at 2.2m tonnes.

This, to me, seems conservative. I see every chance that China will follow the successful template of state-led investment in renewables and in telecoms (think of the strong global position of Huawei) and apply this to recycling. Yes, the technical, logistics and economic challenges of recycling are big, but, if they weren’t big, the opportunities wouldn’t also be big as the challenges would have already been solved.

In my alternative scenario, recyclate as a percentage of total PE production grows from 1% to 31% – still short of the some 70% of paper and around 65% of aluminium that is recycled globally. This would leave China’s 2030 virgin PE production at 22.6m tonnes and production via recylate at 10.1m tonnes.

There are two key messages from this post. Firstly, it is critically important to closely follow Chinese government policy with next month’s plenum a key event to track. And secondly, if China goes for recycling in the way I anticipate, other countries and regions will need to step-up their investment game to avoid a repeat of the events we’ve seen in renewable energy and telecoms.