Global supply chain disruptions may maintain, or even add to, regional petchem imbalances 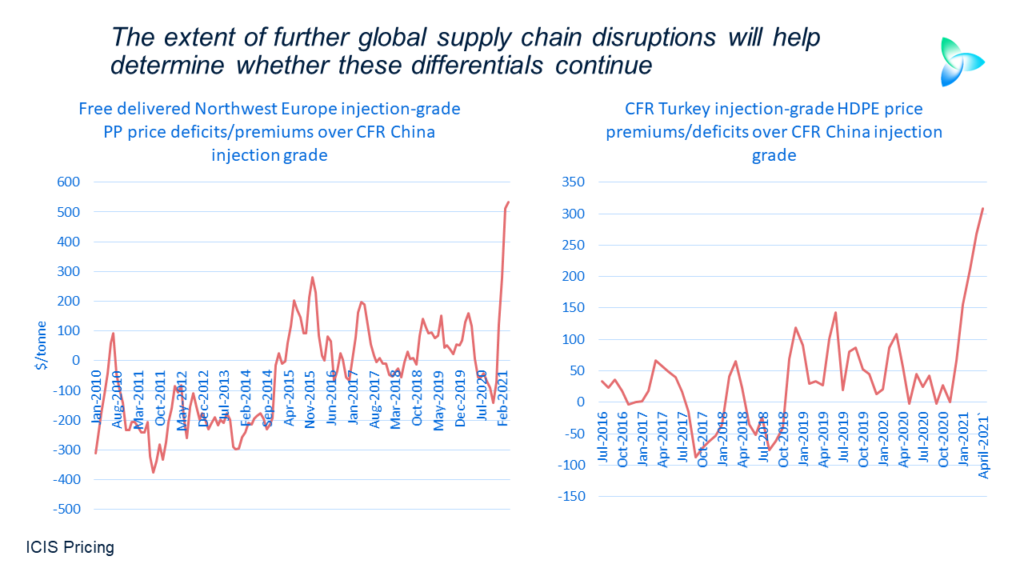 THE GLOBAL petrochemicals business looks set to remain largely in the dark about what will happen next to container freight and semiconductor supply. This a new area of risk for producers and buyers that highlights the need for much better analysis and data on the pandemic’s impact on markets.

Let me begin with a summary of the historical context behind these supply chain issues before I consider what could happen next.

Scenarios for the rest of 2021

It is a similar story across several other grades of polyolefins, types of polymers – and between China and destinations other than just Europe and Turkey.

The difficulty in finding and affording containers to move polyolefins to Europe has limited the ability of exporters to fully take advantage of these spectacularly strong netbacks versus the China market.

China’s relative pricing weakness also relates to its rising self-sufficiency and a possible economic slowdown, which I discuss later in this post.

The other factors behind Europe’s strong markets include low producer inventories at the end of last year because producers had been maximising exports due to what were then better netbacks elsewhere; strong pandemic-related demand; and cracker turnarounds delayed from last year until Q2 this year..

Last week, polyolefins converters in Europe were holding back on spot purchases in some grades in favour of contract volumes because of the recent surge in prices to historically high levels.

Will lack of affordability among converters send the market in the opposite direction? Or will the price differentials stay as they are, partly because of a shortage in containers and semiconductors?

Daniel Yergin, the famous energy analyst and author, suggests the supply chain crisis will get worse over the next few months.

His premise is based on a surge in demand for consumer goods as lockdowns ease in the West, leading to more containers in the wrong place, a further overall shortage of containers and more strain on semiconductor supply.

But what if the surge in consumer demand doesn’t happen as a result of continued sharp rises in inflation?

The US headline consumer price index jumped 2.6% on a year-on-year basis in March, the most since August 2018. The index was also up by 0.6% over February – the biggest one-month jump since 2012. China’s producer price inflation increased by 4.4% in March, the biggest rise since July 2018.  China’s top policy makers have raised their concerns.

“Consumers around the world have stockpiled an extra $5.4tr of savings since the coronavirus pandemic began and are becoming increasingly confident about the economic outlook, paving the way for a strong rebound in spending as businesses reopen,” wrote the Financial Times in this article.

TheFT, quoting Moody’s, said that the savings amounted to 6% of global gross domestic product by the end of Q1 this year.

But the extent to which this money will be spent would vary by different demographic and income groups, The Economist detailed in this article. And, of course, if supply chain issues mean that the new sofa or TV you want to buy isn’t in stock, you won’t buy it.

Assuming the supply chain problems persist, there is another major grey area we need to consider. This is the impact on Chinese exports and the country’s overall economy.

I’ve been flagging up since January the risk that China’s exports might have slowed down this year because of the container freight and chip shortages.

Remember, all year-on-year data comparisons in Q1 2021 were entirely invalid because China was in the middle of the pandemic during the first quarter of last year – so, of course, all these comparisons were flattering.

A critical issue, which we are still not clear on, is whether the strong momentum of exports in Q4 last year was fully carried forward into early 2021. Did supply chain issues prevent this from happening?

This is so, so important for petrochemicals because of last year’s “China in, China out” story – surging petrochemical imports that were re-exported as finished goods. This was a major factor behind strong overall global petrochemicals growth.

Evidence that a slowdown might have already happened comes from this Wall Street Journal report on China’s Q1 GDP results.

The newspaper wrote:  When compared with the last three months of 2020, the Chinese economy expanded just 0.6% in the first quarter of 2021, slowing from a newly revised 3.2% quarter-on-quarter GDP increase in the fourth quarter of 2020, according to data released Friday by the National Bureau of Statistics.”

Just one of many grey areas

The supply chain problems created by the pandemic are just one of many grey areas that need to be addressed in a much more complex and ambiguous world. This has led to the need for new models to assess supply, demand and trade flows.

Supply chains are in the short term a subset of the pandemic megatrend. Over the long term, as I discussed in February, geopolitics will likely reshape the global semiconductor supply chain because of the growing split between the US and China.

This again just scratches the surface of the complexity out there. For a further discussion please contact ICIS at john.richardson@icis.com and we can help support your business.