Just to stress again that this blog represents my personal views and not those if ICIS. 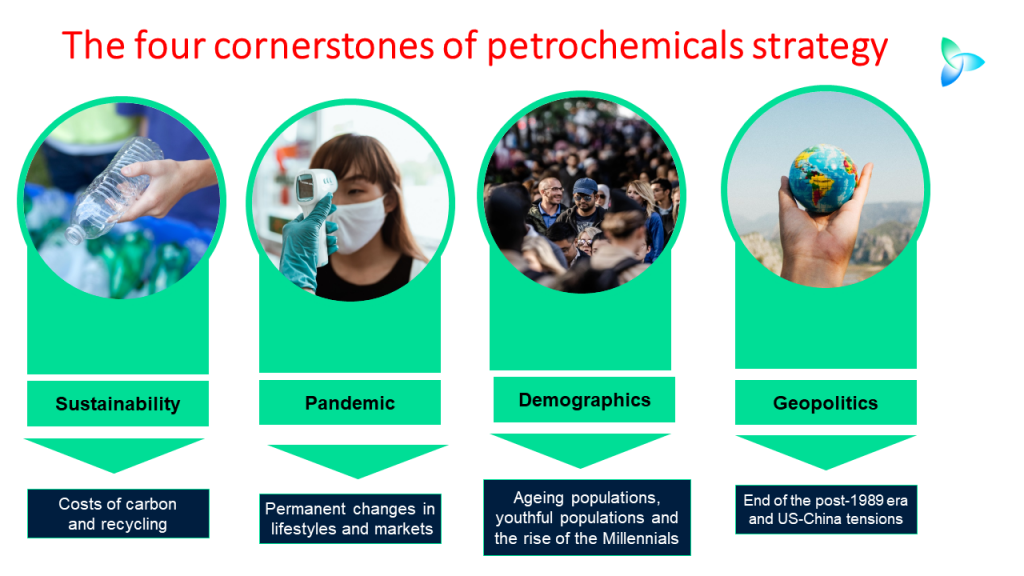 YOU WILL NEED to constantly debate the details of the megatrends as they will very often change entirely. And whilst today’s four megatrends – sustainability, the pandemic, demographics and geopolitics – will remain unchanged, their relative importance will be in constant flux. Think here of how concerns over plastic rubbish, which obviously falls under sustainability, has temporarily receded because of greater hygiene needs resulting from the pandemic.

But to quote John McEnroe, ‘you cannot be serious’ in thinking that sustainability is going to disappear as a megatrend. As further evidence emerges of the damage we are causing to our environment, public and legislative pressure can only build. This is my personal view.

But it does not matter what I think. Even if you disagree that human activity is causing climate change, and that plastic waste in the ocean is not a big deal, the boat has already sailed. Global public opinion has permanently shifted in favour of carbon neutrality and cleaning-up beaches. The petrochemicals industry must respond to public opinion.

Nobody can surely dispute the fact that the pandemic is a megatrend. It will reshape how we work and how we travel for many years to come, perhaps permanently. The pandemic has proven wrong the already flawed notion that you can estimate petrochemicals demand growth through multiples over GDP growth forecasts. Markets have become so complex and volatile that new demand-growth models need to be built.

Demographics are economic destiny as I have been contending for the last nine years. All the data I have seen show that spending patterns change as we get older, and wow, we are really, really getting older.

Think here of the impact on oil prices as the number of people aged over 65 expands. This age group already owns most of what it needs and is living on reduced means because of retirement. When you are not driving to work or taking the kids to school and football practice, you need a lot less gasoline and diesel.

Consider another demographic influence, the Millennials, and how this generation is reshaping the climate debate. Here we have one of the many instances where one megatrend influences the other, in this case the influence of demographics over sustainability.

Because the Millennials largely accept that human activity is wrecking the environment, they are less likely to own a car. They are more likely to object to plastic rubbish , according to surveys by fast-moving consumer goods companies. The rise of social media means you no longer need to own a car to stay in touch with your friends, and the Millennials are adept at using social media.

The ageing of China’s population, which threatens the country’s economic growth, is another example of how one megatrend is affecting another. Because China must escape its middle-income trap if it is to secure its continued economic prosperity, it is on a collision course with the US over access to high-value technologies. Demographics meet geopolitics.

Population ageing explains why China is pushing hard towards petrochemicals self-sufficiency as it tries to move up the manufacturing value chain. The push towards self-sufficiency is also driven by concerns over supply security because of its split with the US and doubts over who will win the new Cold War. Here again, demographics meet geopolitics.

What follows, under headings for each of the four megatrends, are more examples of the new complexity out there. This just scratches the surface of the complexity:

If you are a purchasing or sales manager for a petrochemical producer, you might think, “What on earth has this got to do with me?”. Think again. Micro-movements in demand and pricing are being driven by the pandemic. If you are a brand owner buying plastic packaging or resins to make packaging, you already know that sustainability is a huge issue. This is why you spend so much time redesigning packaging to make it more recyclable.

Purchasing and sales managers would have been caught out if they did not see the US-China trade war coming in 2018 (I did), which was of course the result of geopolitics.

Few people selling consumer goods in India will doubt that the nature of demand is shaped by the country’s youthful population. In China, elevator manufacturers look set to make good money because the government is retrofitting 3m apartments with elevators. This is the result of China’s ageing population.

Awareness of the importance of the megatrends needs to travel all the way up to the CEOs as it is obviously the CEOs that set strategies. If strategies do not reflect the four megatrends, companies will flounder. Wrong strategies cannot be fixed by any amount of tactical adjustments.

PREVIOUS POST Exporters of PP and SM to China seem to have options other than shutdowns, but not PX exporters
NEXT POST Polyethylene demand boom should not obscure focus on major changes in industry fundamentals