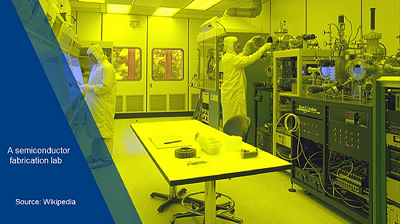 HIGH VALUE semiconductors, which are defined as five nanometres (billionths of a metre) or less in size, have become the new oil – as vital as the black stuff for the workings of the global economy. Semiconductors will, in fact, become even more important as the age of oil comes to an end and as digitalisation and artificial intelligence progress.

And yet, remarkably, there are far fewer manufacturers of sophisticated, cutting edge semiconductors than producers of oil, as The Economist highlighted last month. In 2000, there were 25 top-of-the-range manufacturers but now there are just three – Taiwan Semiconductor Manufacturing Co (TSMC) of Taiwan, South Korea’s Samsung and the US’s Intel.

This could soon fall to just two as Intel is struggling to keep up with making ever-more more complex and capital-intensive chips and is thinking of switching to an outsourcing model, The Economist added.

Here is another very sobering statistic: 80% of all semiconductors – all the way from the fully commoditised to the really, really smart chips – are made in northeast Asia.

The surge in capital costs is the problem at the top end of the business. It costs some $20bn to build a state-of-the-art chip factory compared with $3-4bn in 2011. This has led to Western companies increasingly focusing on design rather than production with production outsourced to the big three.

Why capital costs are soaring is because it is becoming increasingly more difficult to keep up with the innovation required by our rapidly evolving lifestyles. Moore’s Law, which holds that the number of components that can be crammed into a silicon chip doubles every two years, is breaking down. Each doubling now takes closer to three years, according to Linley Gwennap of the semiconductor consultants, the Linley Group.

Further, there is the nature of Western capitalism. The constant pressure for quarter-on-quarter improvements in profitability and the lure of attractive stock market valuations have led former chip manufacturers to focus only on design, with manufacturing outsourced to the big three. The “just-in-time” supply chain model, which is driven by short-term financial metrics, is another problem.

Also consider the soft government loans that have supported TSMC and Samsung – and, more recently, $100bn of state subsidies China has provided for chip manufacturing as it tries to close the technology gap. These levels of support are not available in the West.

If Intel were to drop out of the top-of-the-range chip market this would leave the world entirely dependent on a Taiwanese producer in an earthquake-prone region that China claims as its own, and a producer in South Korea which is next door to a nuclear-armed, belligerent, despotic North Korea.

A treacherous and unbalanced world

This would put China in a real bind because its rapidly ageing population leaves it with little choice but to push hard for self-sufficiency in higher-value chips. China must move up the manufacturing value chain in general to justify the higher wages resulting from its greying workforce. Without a major presence in high-value memory chips, this manufacturing transformation would be impossible because memory chips are so critical for today’s and tomorrow’s global economies.

As this immovable force meets what perhaps could be the immovable object of US resistance to providing access to the technologies China needs, it doesn’t take a great imaginative leap to envisage the outcome: major geopolitical tensions as the drift continues towards a bipolar world of two separate geopolitical and trading zones.

More broadly, we live in a treacherous and unbalanced world where the oil shocks of 1970s could become the semiconductor shocks of the 2020s.

It might not take a geopolitical clash between the US and China to produce repeated semiconductor supply shocks. We could instead see, say, an earthquake in Taiwan. And it might be more of the out-of-the-ordinary economic trends that have led to the current shortage of memory chips.

Auto plants have had to shut down in the West because of the chip shortage with the shortage unlikely to be resolved until H2 2021, say the experts.

This is the result of the rapid recovery in Chinese car demand in the second half of last year as the Chinese economy rebounded from the pandemic. Another factor behind the shortage is booming demand for consumer electronics, such as game consoles, because so many people are spending so much time in lockdowns.

Another trigger for the chip shortage – which is affecting lower-value chips used in internal combustion engine vehicles – is the fallout from US sanctions against Chinese telecoms group, Huawei, and Chinese chip maker, Semiconductor Manufacturing International Corp (SMIC). The sanctions have led to some clients to redirect their orders from SMIC to other suppliers.

In other words, the way that the global semiconductor supply chain works means that it cannot cope with anything beyond predictable patterns of demand that follow long-established seasonal ups and downs.

This is clearly unsustainable and, as I said at the beginning, will become even less sustainable as we become more dependent on computing power for our economic growth.

Think of the smart chips required to reduce heat in electric vehicles and the distances between charges. Advances in artificial intelligence require more computing power for smart homes and smart electricity grades, which, as with electrical vehicles, will play important roles in the battle against climate change.

As the cost of carbon will increasingly be priced into industries such as refining and petrochemicals, improved digitalisation – which again depends on advances in computing – will be critical. Companies will need to be able to gather and process new data sets that demonstrate how carbon efficient they are. The same will apply to data on plastic rubbish as the polymers industry confronts the big legislative and public pushback against the plastic rubbish crisis.

Shortages of microchips could undermine job creation after the pandemic, as many of the new jobs that governments want to create are in green industries.

Fixing the problem is obviously beyond the scope of the petrochemicals industry as it depends on politicians to firstly recognise that this is a major choke point and then introduce tax and other incentives to resolve the issue. This would lead to semiconductor capacity being spread much more evenly across different regions.

Those who are in principle against government intervention in markets should consider this: nobody would argue that good ports, roads, electricity supply and internet connectivity need to be always available for economic prosperity, so why argue against a much more robust semiconductor supply chain? Companies follow financial incentive and the incentives have led them to outsource semiconductor production to just a few providers.

The free market will also play a role in the autos and perhaps other sectors. The memory chips used in electric vehicles are said to be three times the value – because of their greater sophistication – than the chips used in internal combustion markets. This is forcing the auto makers to look for a wider range of suppliers. But, as we have seen, the technical and economic challenges of sophisticated chip production are so great that this is not going to be easy.

The US and China must also divert themselves away from a collision course for many reasons other than just semiconductor supply, of course. Compromises are essential on both sides.

I place the chances of the above happening at less than 50% as today’s politicians often lack long-term vision – and because the forces pulling the US and China towards a collision are so very strong.

Petrochemical companies must, as a result, prepare for more short-term disruptions to supply chains such as the disruption that is taking place right now, which is only affecting the autos sector that only consumes 10% of global chip production. Next time we might not be so lucky. Other critical petrochemical end-use industries such as consumer electronics and white goods could also be affected.

Companies must also accept that the global economy could be brought to a virtual grinding halt by a supply crisis. Disruptions in semiconductor availability may also undermine the innovation essential for the next wave of economic growth.