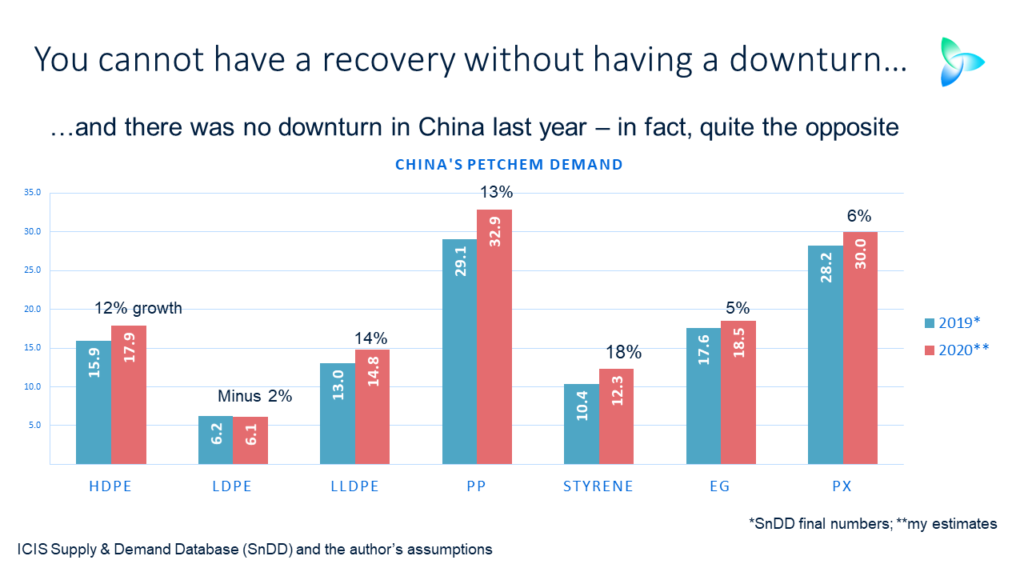 WE WILL CONTINUE to stumble around in the dark unless we gain a much better understanding of the new variables that are shaping the petrochemicals business.

As I’ve been discussing since last August, one of the grey areas is demand and how it has been reshaped by the pandemic, on top of which is the impact of the other three megatrends recognised by the industry – demographics, sustainability and geopolitics.

Is China a megatrend all by itself? So far, I have kept it to a subset of the other four. Like many other economies, its growth will be heavily shaped by each of these four megatrends. But as China largely dominates global petrochemicals demand and imports, there is a case to be made for placing it into a category by itself.

Whatever the categorisation, dedicated internal teams must be set up within petrochemical companies to study just China. A better understanding of government policy and much more granular data on China, province by province, is in my view essential if we are going to gain better visibility on the world’s most important market.

And, as always, analysis needs to be split into the short -and long-term to meet the requirements of operational teams, who typically only look forward 12-18 months, and the C-suites that need to plan for the next 5-10 years and beyond.

But until or unless this happens, we must work with what we have got. What therefore follows is an example of what I see as the right approach to analysing the data that is available. Here I focus on China’s economic growth prospects over the next 12-18 months, to support the work of petrochemicals operation teams.

The wrong focus on year-on-year numbers

I continue to worry that there is misleading euphoria over the Chinese economic recovery in 2021. I have been highlighting the problems with this assumption since February.

You can only have a recovery if there is a downturn in the first place, and, as the slide at the beginning of this blog post – which examines China’s petrochemicals demand – reminds us, there was no downturn last year.

In fact, the exact opposite happened. China’s boom in exports of finished goods led to China being the only economy out of the major economies to achieve positive GDP growth in 2020.

Last week, though, there was a glimmer of light when the Wall Street Journal (WSJ) reported: “When compared with the last three months of 2020, the Chinese economy expanded just 0.6% in the first quarter of 2021, slowing from a newly revised 3.2% quarter-on-quarter GDP increase in the fourth quarter of 2020, according to data released Friday by the National Bureau of Statistics.”

In a separate report on the same day, the WSJ quoted Julian Evans-Pritchard, an economist with Capital Economics, as saying that the latest quarter-on-quarter GDP growth was the slowest rate in the past decade, with the exception of the coronavirus-affected first quarter of 2020.

He added that China’s March industrial production and construction and service sector activity had weakened.

Another of the data and analysis vacuums we confront is the impact of the global container freight and semiconductor shortages on China’s exports during Q1.

Again, export data comparisons for the fourth quarter of last year versus Q1 2021 are hard to come by.

The only data I can find only focuses on year-on-year comparisons of exports. These are bound to be flattering because many of China’s factories had shut down during Q1 due to the pandemic as overseas demand also cratered.

The Financial Times estimates that global consumers have accumulated $5.4tr of extra savings since the pandemic began, equivalent to 6% of  gross global GDP by the end of Q1 this year.

This is a potential bonanza for Chinese exporters as countries emerge from lockdowns and as rich-world consumers open their wallets in order to indulge in “revenge spending”.

But if a big splurge in spending were to begin, it might be brought to a halt by a further increase in already worrisome consumer-price inflation.

And/or the goods to feed the splurge may quickly become available if Daniel Yergin is correct.

The famous energy analyst and author predicts that a consumer spending rally will worsen the container-freight and semiconductor shortages. You cannot buy a new game console or giant flat screen TV if the console and the TV are not in stock.

Then there is the issue of China’s local demand. I keep hammering away at the point that the China Beige Book, the independent China data firm, estimated that last year’s retail sales fell by 4.3%. This underlines my point that it was exports that enabled China to post a positive 2020 GDP growth of 2.3%.

But retail sale grew by 34.2% in March this year, up slightly from the 33.8% increase in January and February – and above the projection for a 28% rise estimated in a Bloomberg survey.

Still, though, as I discussed last week, the government appears to be taking advantage of last year’s strong economic performance by again blowing hot on deleveraging. It has been blowing hot and cold since 2009, when China’s debts first started to alarmingly increase because of the government’s response to the Global Financial Crisis.

During the sessions, government officials recognised that the recovery from the pandemic had added to income inequality,  as it had made the big export-focused companies a lot richer. Another round of real-estate inflation had also widened the income gap, the officials added.

On the issue of real estate, here is something quite remarkable from Nikkei Asia, economy and business news and analysis site: “According to Haitong Securities, over 30% of economic growth from last spring to the end of 2020 can be accounted for by real estate investment, more than the field’s average contribution over the past decade.”

“The development that helped power China’s recovery from the coronavirus outbreak has left lower-tier cities with a build-up of excess homes. New condominium inventories reached a four-and-a-half-year high by square footage around the end of last year, according to E-House China R&D Institute.”

Therefore, if deleveraging continues, combined with China sticking to its pledge to tackle income inequality, air may escape from the property bubble. This would remove 30% of China’s recent growth momentum, if Haitong Securities is correct.

Beijing could easily change course, however, if its export trade is struggling and domestic growth falters. This has happened many times before. Deleveraging might turn to re-leveraging.

The impact on petrochemicals 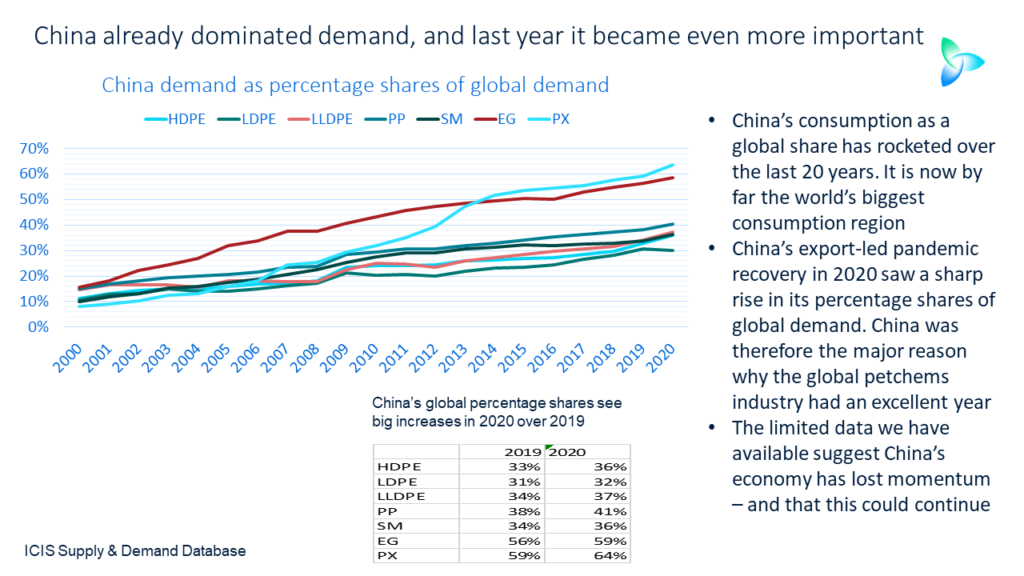 Not all petrochemicals would be equally affected if China’s exports remain off the boil and if the local economy doesn’t pick up the slack.

As I’ve been highlighting for the past five years, polyethylene (PE) growth in China has become largely divorced from GDP, primarily because of the huge increase in demand for internet packaging as more and more sales move online.

Demand for PE hygiene applications surged last year with this higher level of demand likely to be maintained in 2020 because of the risks of another wave of the pandemic.

PE is also predominantly “local-for-local” in China and in every other county and region. It is less reliant than the other polymers on exports of finished goods.

Some 10-15% of PE imported by China is understood to be re-exported either as packaging for finished goods or as components of the finished goods themselves. This compares with 20-30% for polypropylene and styrene monomer.

We are, as I keep stressing, stumbling around in the dark because of our lack of visibility over global demand and supply chains. But one can argue that China is the biggest knowledge hole of all because of its greatly increased importance to the global industry, as the chart at the beginning of this section illustrates.

China became even more important the industry last year because of its export-led recovery. Hence, there could be very serious consequences for every other region if China is slowing down.

We must find better answers to today’s data and analytics challenges, which is what we are working towards at ICIS.