What follows is an entirely personal take on the challenge of plastic waste and does not represent the views of ICIS or any other expert opinion I have sought out. The views are put forward in the spirit of debate as we move forward, as an industry, to solve the crisis of plastic waste. 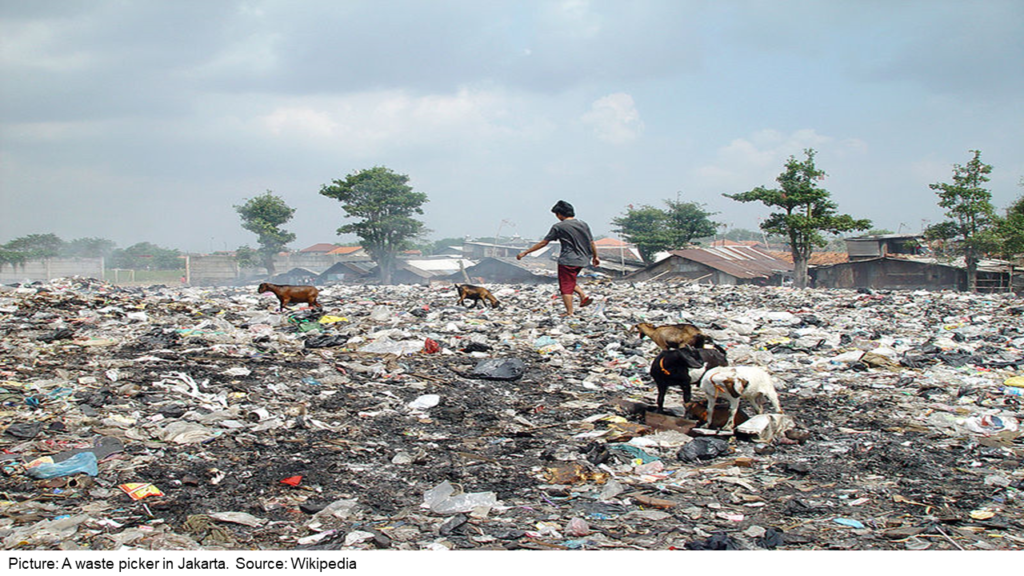 SOME TWO BILLION people, the vast majority of whom live in the developing world, lack access to any kind of rubbish collection system, I was told by an NGO several years ago.

More than 90% of plastic rubbish in the world’s oceans comes from just ten rivers, two of which are in Africa with the remaining eight in Asia, according to a 2018 study.

Until or unless these challenges are fully addressed, whatever the developed world does to boost circularity will barely move the needle towards solving a crisis that could get worse.

The crisis will get worse without urgent action because of the inevitably of economic growth.

Hundreds of millions more people in the developing world will escape extreme poverty over the coming decades. Many more millions will climb up the income ladder to more comfortable lifestyles.

As people get richer they demand – and are of course entitled to – the modern-day goods taken for granted in developed countries.

Many of the goods made from single-use plastics are lifesavers rather than luxuries. Think of syringes, blood bags, face masks, hospital gowns, medicine blister packs and medicine bottles.

Plastic films, when they are used to wrap and preserve food, also fit into the category of essential single-use plastics. Food production is sufficient in some developing countries. The problem is instead getting food to people in a fresh condition so it can be consumed.

And why shouldn’t every Indian and Bangladeshi have access to all the luxuries that the rich world takes for granted?

How does one also define a luxury? A basic mobile phone that arrives packaged in single-use linear-low density polyethylene and expandable polystyrene is an essential tool for accessing microcredit and arranging business meetings.

Smartphones allow the use of a wide range of apps that enable small businessmen to be more efficient.

Here in Australia, several of my friends run small business. They can, for instance, do their accounts on the go on their smartphones which saves them time and so makes them money.

Sure, we also need a root and branch reform of how we design packaging. If we use less polymers to achieve the same end-use performances that’s great. A lot of work towards this end is already under way.

Also important is designing multi-layer film applications from a single type of polymer where there are no compromises on performances. This makes mechanical recycling possible.

But still, building adequate plastic collection and storage systems in the developing world is essential if we are going to resolve this crisis.

The investment required will be huge. The solutions complex and sometimes region-specific. What will work in downtown Jakarta will not work on Indonesia’s smaller islands. There are some 6,000 inhabited islands in Indonesia.

We can solve this crisis, though. It can be done. But the first step is recognising that how we dispose of plastic waste must be solved in parallel with developments in mechanical and chemicals recycling.

In five years, levels of plastic in the oceans will have increased if we mainly or entirely focus on mechanical and chemicals recycling at the expense of failing to resolve the disposal issue.

Landfills are better than the alternative

There is an aversion to landfills in the developed world. But in poorer countries, landfills are better than the alternative of leaving plastic in the open environment.

Landfills are also so much better than open burning of plastic that creates dioxins and particulate matter. Open burning is very common in the developing world.

The developing world needs a lot more landfills, until or unless we reach the point where recycling is a truly economic and global industry.

Mass-scale recycling in poorer countries might one day reduce landfilling to a minimum. Poorer countries would then be unlocking “embedded carbon” – the economic value in discarded plastic that is going to waste.

But what about the carbon footprint from recycling? Would a mass-scale recycling industry be carbon positive or negative?  We don’t have adequate life-cycle analysis to make any judgements.

I’ve obviously started this section of the post at the wrong end of the chain, at the landfill level. Moving upstream, we’d of course also need refuse collection trucks and separate bins for plastic waste.

Social habits would need to change. People would need to be incentivised to use the bins rather than continuing to leave plastic in the open.

The trucks would need to be able to get up every dirt track. Some roads, even in big cities in the developing world, are impassable. A lot more tarmac needs to be laid.

Trucking waste to big landfills may only be feasible in urban areas because of transportation and carbon costs. Remote landlocked communities and islands might need their own localised plastic waste systems.

One solution for remote areas could be further investment in plastic-to-fuels plants. These technologies are well-established and would probably not be too costly to licence and build.

But we must assess the carbon and particulate matter produced by converting plastic into fuels and using the fuels to run vehicles.

Huge investments in plastic-to-fuel plants might even slow the adoption of electric vehicles.

Rubbish collection and landfill systems are often run as services. They don’t tend to make money. Who should pay the bill?

Should it be the polymer companies that make the plastic pellets? Should it also be converters, brand owners, retailers, consumers and governments?

How do we divide up the costs of collection and sorting? Plastic rubbish is often mixed with organic waste.

Would it be reasonable to expect polymer producers and converters to pay for collecting food waste? Or should this cost be allocated to the food companies? How do practically divide the costs?

The 2016 Paris Agreement was a watershed deal that I discussed at the time in a series of blog posts. It represented a permanent, and, I believe, irrevocable shift to a much more committed and systematic struggle against climate change.

We need a similar global meeting on plastic waste where global targets are set for reducing the content of plastic in the oceans and rivers.

This then needs to be followed with plastic taxes and credits that incentivise us to build collection and storage systems in the developing world, in the same way that carbon credits and taxes are evolving following the Paris Agreement.

Plastic taxes and credits will never be perfect as we constantly struggle with unintended negative consequences. It could also take a long time to fix the crisis in the developing world.

But we must start with binding global targets for reducing levels of plastic waste in rivers and oceans. What would then follow would be regulations to achieve these targets.

As I said at the beginning, these are entirely personal views and do not represent the views of ICIS or any other expert opinion i have sought out.

They are here to be shot at, to be critiqued and challenged. It is through criticism and challenge that we can solve one of the two defining challenges facing our industry, the other being carbon.