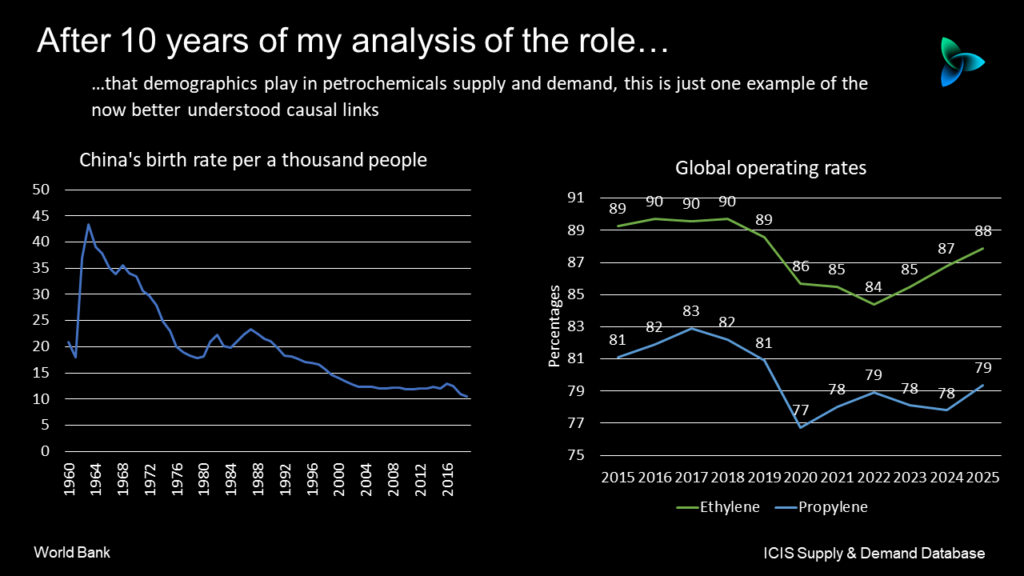 TEN YEARS AGO, fellow blogger Paul Hodges and I  first highlighted the leading role that changing demographics would play in reshaping petrochemicals supply and demand. We have been emphasising the importance of demographics ever since.

Demographics have, of course, always been a critical shaper of economies throughout human history. But during the last 70 years, there have been such major changes in demographics that the study of demographics must be at the very heart of your company’s strategy.

The Babyboomer generation in the West led to a surge in demand as the rapid increase in babies born in the 1950s and early 1960s joined the workforce from the 1970s onwards.

This helps explain high levels of inflation during that decade because too much demand was chasing too little supply. Another driver of inflation was the Middle East embargos against oil exports to the West because of the West’s support for Israel.

Then came the 1990s and first the integration of Eastern Europe into the global economy. This helped dampen inflationary pressures because of the plentiful supply of workers in the east willing to work for low wages in export-focused factories. This reduced the cost of finished goods in the West.

Hundreds of millions of young people were willing to migrate from the countryside to China’s coastal cities to work in export-focused manufacturing plants. The world began to talk about the “China price” and how it was further depressing global inflation.

Baby boomers have had fewer children

The next pivotal event occurred in late 2001 when China joined the World Trade Organisation. The tariffs and quotas that had restricted Chinese exports to the West were removed. This enabled China to take even more advantage of its youthful population, and so, cheap labour supply.

In other words, if you had taken China’s “demographic dividend” into account, you could have forecasted its rapid growth in petrochemicals demand.

But Paul’s analysis and my analysis from 2011 onwards has highlighted two critical changes in these demographic patterns:

US and China: opposing forces both driven by demographics

Here we are where we are today. China is aggressively pushing towards petrochemicals self-sufficiency – a risk I first highlighted in 2014 – because it needs access to cheaper raw materials as compensation for the demographic drag of an ageing population. This also explains why it is concluding high-level government deals with the Middle East and Africa to get access to competitively priced oil and gas.

When it comes to petrochemicals, as I discussed last week, China is waving the “big stick” of potentially complete petrochemicals self-sufficiency at global markets as a negotiating ploy. It may slow down its capacity growth in favour of competitively priced imports from the incumbent major exporters to China.

But the effect will, I believe, be the same: whatever route it chooses, China will move us from a world of petrochemicals inflation to deflation.

An ageing population also helps explain China moving lower-value Chinese manufacturing capacity to fellow Belt & Road Initiative member countries that have more youthful populations and thus cheaper labour costs. In this way, China might be able to maintain its position as the low-cost workshop of the world.

The increased tensions between the US and China are also the result of demographics.

In China’s case, its push for access to higher-value technologies is also a response to its ageing population. Chinese domestic manufacturing needs to move into higher-value areas to justify increased labour costs resulting from population greying.

In the case of the US, it must cling on to its technological advantages to maintain its edge in higher-value industries as its own population ages. The US is therefore trying to restrict China’s international access to cutting-edge know-how, one of the reasons why the US and China could be heading into a new cold war.

In petrochemical terms, what these two opposing forces could mean is the world splitting into two very separate geopolitical and trading zones – one led by the US and the other by China. Petrochemical trade flows between these two regions could be very limited as each seeks self-sufficiency.

This points to the need to overlay this kind of analysis on top of cost curve and cost-per-tonne analysis.

Feedstock, logistics and technology costs and efficiencies will continue to play a role in when and where new plants are built and how existing plants operate. But more important could be the redrawing of global trade flows, triggered by the world splitting into these two competing zones because of demographics.

There are many more complexities and uncertainties that relate to demographics.

Just three companies dominate global production of microchips five-nanometres and below. They are Intel, Samsung of South Korea and TMSC of Taiwan – although China is racing to catch up. Intel has been struggling to stay in the game.

Without adequate access to these types of chips, no economy can progress in the industries of the future such as electric vehicles, sustainability in general, the internet of things, artificial intelligence and smart grids.

We obviously therefore need a scenario-based approach involving either the US or China winning the race to control the chip market. Or hopefully we will see an equal balance of access by both Superpowers and their trading patterns. This has major implications for the patterns of petrochemical demand growth across different regions and overall demand growth.

One must also draw a link between an ageing US population and Biden’s $2.3tr stimulus bill. The bill is of course also about repairing the damage caused by the pandemic. But it is also about creating new paths to growth to compensate for an ageing population, including investments in green energy.

This then connects with a challenge faced by another region, the Middle East, that has very different demographics to the US and China. Its population is very youthful. For example, the median age in Saudi Arabia is27.5 versus 38 in the US.

One of the drivers of the sustainable economy in Europe is also creating new jobs for ageing populations. China could  go down the same route for the same reason – although I believe this is more in doubt.

The Middle East can only cash in on its demographic dividend of a youthful population if it is able to create enough jobs for its young people. But how can it achieve this objective in an era of hydrocarbon energy abundance? The sustainability push, partly again the result of demographics, will I believe result in lower oil and gas prices.

This creates the potential for so many economic problems and geopolitical tensions that scenario planning is essential.

What would failure by the Middle East to cash in on its demographic dividend mean for petrochemicals demand? What would success look like? And what would be the outcomes of somewhere between failure and success?

Africa and India also have very youthful populations. Niger has the world’s youngest median age at just 15 followed by Uganda at 16. India’s median age is 27. Cashing in on these demographic dividends depends on the extent of investments in basic infrastructure such as roads, potable water supply, healthcare and education. Again, we need scenarios for success, failure somewhere in between and petrochemicals demand.

So, after a decade of study, reports and articles, Paul and I can rest our case. The jury has finally returned with the verdict that we had advocated for. The question we must now move onto is how to adjust petrochemicals supply and demand models to account for demographics. This will be the subject of a later post.