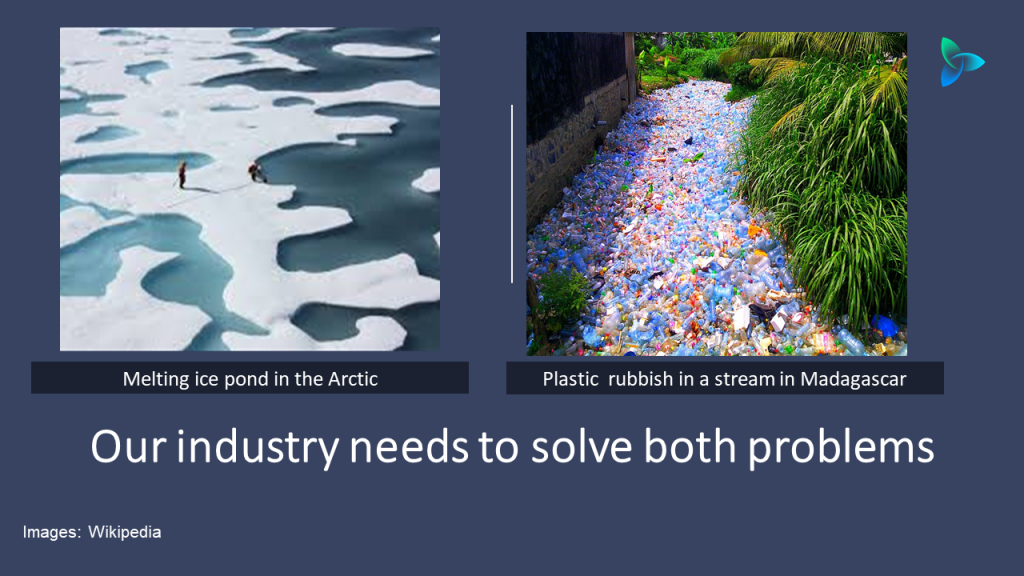 THIS IS VERY much a personal plea to our industry about what I see as the biggest challenge we face in 2021 and beyond: carbon and other greenhouse gases.

“We need to rebrand climate change as the climate crisis,” a source who works for an oil, gas and petrochemical company has been telling me for months. Hear, hear.

A fundamental reshaping of finance

Perhaps life cycle assessments of carbon emissions from chemical and mechanical recycling processes are already part of project assessments, from collecting the waste through to plant operations to the net gains from not making virgin plastics. If so, let us see the data.

Investors will want to hear the data as, according to Larry Fink, we are “on the edge of a fundamental reshaping of finance”. He is chairman and CEO of BlackRock, the world’s biggest asset management company.

He also wrote, in a letter to CEOs earlier this year: “Climate change has become a defining factor in companies’ long-term prospects.”

Investors were, even in the midst of the pandemic, looking “to see how companies are rebuilding their businesses for long-term sustainability and value creation”, he added in the same letter.

BlackRock said it would use its voting rights to vote against the re-election of directors who it felt were not moving quickly enough on socially responsible issues such as climate change.

BlackRock had $7.8tr of assets under management as of Q3 of this year and had substantial states in approximately 91% of S&P 500 companies. Wow.

The same investor rigour will also, I believe, be applied to conventional petrochemical projects as steam cracking generates more than 300m tonnes of CO2 per annum, according to a 2019 academic paper, Sustainable innovations in steam cracking: CO2 neutral olefin production.

I therefore believe we are now seeing the construction of the last generation of conventionally built and operated steam crackers.

I also think that existing crackers and reformers, etc., will have to be retrofitted with technologies that substantially reduce their carbon footprint. Shutdowns will otherwise happen as governments impose more and more carbon taxes, import tariffs and carbon credit trading schemes.

“Enhancing heat transfer in the radiation section, using green energy and reducing coke formation are key to substantially reduce CO2 emissions,” wrote the authors of the same paper, which appeared in the journal, Reaction Chemistry & Engineering.

It will not be just BlackRock and other investors that will set higher carbon standards for all industrial projects; so, too, will governments, both in the developing as well as the developed world – including, crucially, China.

Chinese clarity and US uncertainty

China will, in my view, dominate the funding of petrochemical projects over the next decade. This will be the result of many more domestic projects and projects overseas in Belt & Road Initiative member countries.

China’s objective is to create complete petrochemicals self-sufficiency within its China-led economic and geopolitical zone as we head towards a bipolar world.

China must escape its middle-income trap and it can only do this by rising up the manufacturing value chain. The technologies and processes necessary for more sustainable petrochemicals production are higher value.

Think here of electric cracker furnaces powered by renewable energy. Think, also, of the innovations taking place in green hydrogen. If China were to win strong global positions in these types of technologies, it could help justify the higher wages resulting from a rapidly ageing population.

So, expect major Chinese government investment in green petrochemical technologies and processes. This will follow blueprint set by the billions of dollars of government financing that is flowing into local electric battery production.

Xi Jinping, China’s president, pledged in September this year that his country would be carbon neutral by 2060. This represented a geopolitical step change for China.

“China has long argued that as a developing economy it should not have to share the same burden of curbing emissions as developed nations whose pollution went unchecked for decades,” wrote the New York Times, immediately after the announcement.

“China is now pledging to lead by example, setting itself goals befitting a country that aspires to be a superpower,” the newspaper added.

The climate crisis will, in my view, be used by China to improve its global standing during a period when the US direction is far from clear.

China has stepped into this uncertainty with a clarity of direction. The Chinese Communist Party’s Fifth Plenum, which took place last month, re-affirmed that greater environmental protection will be at the core part of the country’s economic policies. The plenum set the framework for China’s economic direction over the next 15 years.

The same green technologies will be used for both domestic and overseas petrochemicals projects. Pursuing a green agenda at home while taking a different approach in other countries could weaken China’s international standing.

Bring forth the engineers

It has been a year like none of us have seen before. Our industry has experienced much stronger profitability than just about any of us had even dared to hope for back in Q1. There is every chance, even if progress on tacking the virus falters, that profitability will remain strong in 2021 because petrochemicals demand has largely become decoupled from GDP.

But the temperature of the water is rising, and the frog is in the proverbial pan of water. The four megatrends – sustainability, demographics, geopolitics and the pandemic – require entirely new business models.

Here we have discussed the interplay between three of the trends – sustainability, of course, demographics (China’s need to compensate for a rapidly ageing population) and geopolitics (China using sustainability as a means of raising its international standing as it competes against the US).

You might feel comfortable now because you are making good money, but you need to get out of the water before you boil to death. As an animal lover I do hate this analogy, but I cannot think of one that is better.

On the issue of sustainability and new technologies, this a huge opportunity for all the brilliant scientists, chemists and engineers that work in our industry. Successful innovation has been the route to our success in the past and it can and will be in the future.