A paradigm shift is underway in the plastics industry as public concern mounts over the impact of plastic waste on the oceans and the environment.

For 30 years, plastics producers have primarily focused upstream on securing cost-competitive feedstock supply. Now, almost overnight, they find themselves being forced by consumers, legislators and brand owners to refocus downstream on the sustainability agenda. It is a dramatic shift, and one which is likely to create Winners and Losers over a relatively short space of time.

The pace of change is startling. In January, 11 major brands, including Coca Cola, Unilever, Wal-Mart and Pepsi (and since joined by Nestlé) announced they were committed to working towards using “100% reusable, recyclable or compostable packaging by 2025“. Then in April, a UK government-led initiative saw 42 companies, responsible for over 80% of the plastics packaging sold in UK supermarkets, promise to “transform the plastic packaging system and keep plastic in the economy and out of the ocean”.

Tesco, the UK’s largest retailer, added to the pressure by beginning the move to a “closed loop system”. Clearly seeing the issue as a source of potential competitive advantage, they announced plans to remove all “hard to recycle” plastics – such as polystyrene, PVC and water-soluble bio-plastics – by the end of next year. Then last month, the EU Commission adopted new rules that will mean a minimum of 50% of all plastic packaging waste will be recycled by 2025. In addition, it has proposed drastic action, including bans, to reduce the use of the top 10 single-use plastic items found on EU beaches by 2021.

Understandably, many companies and CEOs have failed to keep up with these developments. Others have simply ignored them on the assumption they will prove to be all talk and no action. But nobody who attended the Circular Economy Forum at the recent ICIS World Polyolefins Conference could have come away believing that “business as usual” was a viable option for the future. As Borealis, Europe’s second largest polyolefin producer, explained, their vision is instead to “establish plastic waste as just another standard feedstock as the new normal” for the industry. 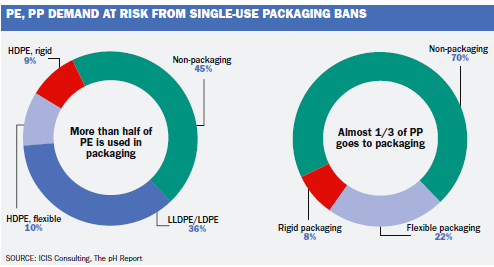 As the second chart shows, major plastics including polyethylene and polypropylene are now under major threat.

More than 50% of PE demand, and nearly a third of PP demand goes into single use packaging. Following the World Economic Forum’s ‘New Plastic Economy’ report in 2016, and Sir David Attenborough’s ‘Blue Planet 2’ series for the BBC, it is clear that this application is under major threat.

The third chart highlights how business models are already starting to change. The current model was highly successful during the BabyBoomer-led economic supercycle, when demand grew on a constant basis. Companies could choose to compete via cost leadership or value-added strategies, or via a focus on premium products or service-orientation. But now the middle ground is starting to disappear: as demand growth is slowing and profits will be squeezed as competition intensifies. We are instead going back to the polarised model that existed before the 1980s:

Paradigm shifts generally produce winners and losers. In this case, the winners will be those plastics producers who adapt to the new opportunity created by the need to produce recycled plastic. This will clearly require investment in recycling facilities, but the sums involved are small compared to the cost of building new olefin crackers or refinery capacity. And in many countries, producers can even expect to be paid to take the recycled plastic as a feedstock, when the alternative is the cost of sending it to landfill.

The losers, of course, will be existing feedstock suppliers:

As National Geographic has reported, the world has produced around 8.3 billion tonnes of plastic over the past 60 years, and only 9 per cent of this has been recycled. This is a shocking waste of a valuable resource. The paradigm shift now underway is well overdue and should prove very profitable for those companies prepared to seize the opportunities it creates.

PREVIOUS POST 2018 Global Outlook – a mid-year update: ACS webinar on Thursday
NEXT POST Airbus warns of "dawning reality" there may be no Brexit deal