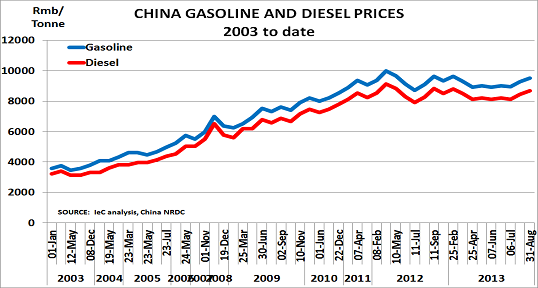 Think back over the past 5 years.  Can you remember a single time when oil supplies were actually difficult to find?  If you can’t, then you have the same memory as the blog.

Official statistics support this view.  Thus last week’s US EIA report noted that “U.S. crude oil inventories are near the upper limit of the average range for this time of year.” Equally the latest International Energy Agency report states for OECD N America that “By end‐June, regional refined products inventories stood 20mb above the five‐year average“.  Similarly total OECD Europe stocks are at average seasonal levels in terms of forward cover, whilst OECD Asia Oceania oil stocks are slightly above average levels and China’s stocks appear to be comfortable.

So why exactly did oil prices jump 6% in 2 days last week?   The situation in Syria is obviously terrible for the civilian population, but its oil production last year was just 164kb/day.  Equally, the market has absorbed much greater supply disruption in Libya and elsewhere in the recent past without observable shortages developing.

The answer, unfortunately, lies in the combination of the $33tn of liquidity which has flooded world asset markets from governments and central banks, plus the decision by pension funds to speculate in commodity markets.  Thus a senior manager at pension fund Hermes told the Financial Times excitedly:  “The underlying physical market is extremely tight, the Syria headlines were just the signal the market needed to get really long,” whilst confirming Hermes had “$2bn in commodity assets and is positioned for a further rally in Brent“.

Hermes own the UK’s largest pension fund.  One would therefore have hoped they would use their investment muscle to moderate oil prices, rather than boost them.  It is certainly hard to see how their reported comments match their claim to be “an industry leader in responsible investing for thirty years“.  If a willingness to speculate on short-term futures market movements is “responsible investing”, one wonders what irresponsible investing would look like.

Ironically, the CEO is also current chairman of the 300 Club, a group of leading investment houses whose manifesto creates the expectation that they understand the key issues:

“The mission of the 300 Club is to raise awareness about the potential impact of current market thinking and behaviours, and to call for immediate action….Current economic and investment trends will change the investing landscape over the next two decades and we are at a crisis point which presents huge risks to investors….current financial and investment theory and practice run the risk of failing investors at their time of greatest need.”

In the meantime, it is the poor consumer (and potential Hermes pensioner) who suffers.  Oil and product prices are all at much higher levels than could possibly be justified by the fundamentals of supply and demand.  The impact is global: as the chart shows, China has just increased its gasoline and diesel prices for the 5th time this year.  And China is not the only emerging market to suffer, with India’s prices inflated still further with the rupee at a record low versus the US$.

Oil price speculation by pension funds is not only irresponsible, but also self-defeating because today’s high oil prices will reduce future investment returns.  As the American Chemistry Council warn in their latest weekly report, “prices above $115 per barrel (Brent) will likely erode economic growth. They have in the past.”