Home Blogs Chemicals and the Economy Who will finance the debt rollovers and new US ethylene crackers?

Who will finance the debt rollovers and new US ethylene crackers? 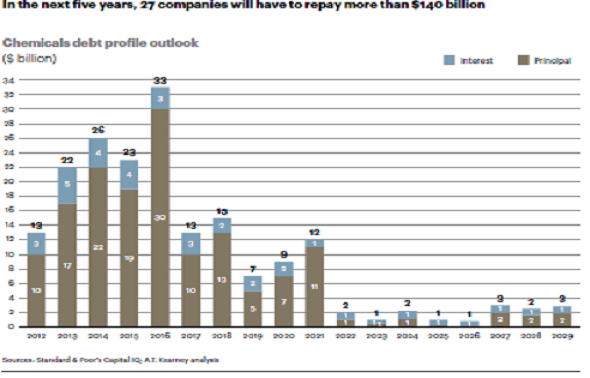 A blog reader has kindly forwarded an interesting paper from AT Kearney, which looks at the amount of debt due to be refinanced in the chemical industry over the next 5 years.  As ATK note:

“The restructuring and debt buildup that occurred in the chemicals industry from 2006 – 2008 was extraordinary—more than $330bn in deals over that period, with most deals valued at more than $5bn. The effect of that debt buildup is nearing: a wave of repayments that will come due between 2013 and 2016. In the next five years, 27 companies will have to repay $110bn.”

The report is based on data from 200 of the world’s major chemical companies, with combined debt of $380bn.  Around half of this debt ($170bn) belongs to 27 companies, who each have global turnover >$1bn.  And it suggests that “Debt refinancing is likely to be a major driver for merger, acquisition, and divestment activity in all regions”.

One major complication in this refinancing process is the $110bn wave of new investment in the US, which could add 40% or more to current capacity.  There is, after all, only so much finance available.  And ATK rightly point out that there have been some painful write-downs in the sector since 2008.

It is very hard to see how all this financing and refinancing can take place at the same time.

The blog’s other concern is that very few in the industry seem worried by the inherent contradictions exposed in the ATK report.  If all this new US  capacity goes ahead, there will be massive over-capacity, particularly as China is also planning major expansions based on coal-to-chemicals.  As ATK point out, there is thus a real risk that we will see “a cyclical low in the commodity markets based on overbuilding in the United States“.

It would be best if companies faced reality on this issue sooner, rather than later.  Boards need to ask hard questions about the robustness of future demand projections.  And they should cancel projects which cannot be supported with signed offtake contracts from customers with strong balance sheets.

Equally, companies that need to refinance should follow the INEOS lead and tap the market now.  Investors currently believe we have arrived at nirvana, and are happy to provide finance for almost anything today, at record low rates.  CFOs should take advantage of this ‘bird in the hand’ today, before investors change their minds.