No country in the world now has a top quality pension system.  That’s the conclusion from the latest Report by pensions consultants Melbourne Mercer.  As the chart above shows:

Unsurprisingly, the cause of the problems is today’s ‘demographic deficit’, as the authors highlight:

“The provision of financial security in retirement is critical for both individuals and societies as most countries are now grappling with the social, economic and financial effects of ageing populations. The major causes of this demographic shift are declining birth rates and increasing longevity. Inevitably these developments are placing financial pressure on current retirement income systems. Indeed, the sustainability of some current systems is under threat.”

These problems have been building for years, as politicians have not wanted to have difficult conversations with voters over raising the retirement age.  Instead, they have preferred to ignore the issue, hoping that it will go away.

But, of course, problems that are ignored tend to get worse over time, rather than go away.  In the US, public pension funds saw their deficits jump $343bn last year to $3.85tn – making it almost certain that, eventually, pension benefits will have to be cut and taxes raised. 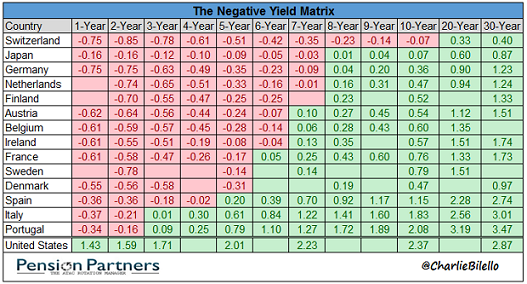 The issue has been that politicians preferred to believe central bank stimulus programmes could solve the deficit by cutting interest rates and printing large amounts of virtually free cash.  And unfortunately, when it became clear this policy was failing to work, the banks “doubled down” and pursued negative interest rates rather than admitting defeat:

2 years ago, Swiss pension experts suggested that its pension system would be bankrupt within 10 years, due to the requirement to pay retirees an annuity of 6.8% of their total savings each year.  This rate is clearly unaffordable with negative interest rates, unless the funds take massive risks with their capital.

“173 million workers are covered under Social Security.  46% of the workforce in private industry has no private pension coverage.  39% of workers report that they and/or their spouse have not personally saved any money for retirement.”

Rising life expectancy is a key part of the problem, as the World Economic Forum (WEF) reported in May.  Back in 1889, life expectancy was under 50 when Bismarck introduced the world’s first state pension in Germany.  Today, the average baby born in the G7 countries can expect to live to be 100.  As WEF conclude:

“One obvious implication of living longer is that we are going to have to spend longer working. The expectation that retirement will start early- to mid-60s is likely to be a thing of the past, or a privilege of the very wealthy.”

Today is not 1986, when President Reagan cut taxes in his October 1986 Tax Reform Act and was rewarded with higher tax revenues.  30 years ago, more and more BabyBoomers were entering the wealth creating 25 – 54 age group, as the chart from the Atlanta Fed confirms:

The issue is the ageing of the Boomers combined with the collapse of fertility rates:

As I warned back in May, debt and demographics are set to destroy Trump’s growth dream.  And without immigration, the US working age population will fall by 18m by 2035, making a bad situation even worse.  Instead of tax cuts, Trump should instead be focused on 3 key priorities to:

Future retirees will not thank him for creating yet further debt headwinds by proposing unfunded tax cuts.  These might boost GDP in the short-term.  But they will certainly make it even more difficult to solve tomorrow’s pension deficits.

The world is coming to the end of probably the greatest financial bubble ever se...