Home Blogs Chemicals and the Economy The next billion phone users will be buying $10 smart feature phones, not $1000 iPhones

The next billion phone users will be buying $10 smart feature phones, not $1000 iPhones 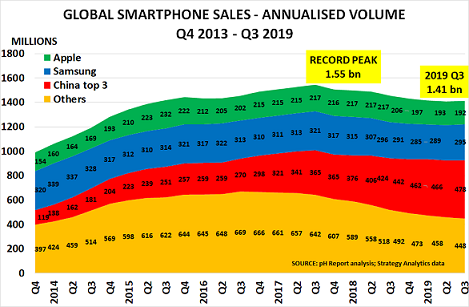 Smartphone sales plateaued in Q3, down 9% since Q3 2017’s peak of 1.55bn, as the chart shows.  But the bigger threat from smart feature phones – now retailing for as little as $11 – continues to grow as Reliance and Vodacom launch new models in India and Africa.

This has important consequences, and not just for the smartphone market.  President Trump has been attacking Huawei on grounds of national security, but consumers outside the USA – where Huawei has only a small presence – clearly like their phones. And it is hard for European or other governments to ban Huawei from major telecoms contracts, if their citizens are happily using Huawei phones.

This may, of course, change if Huawei continues to lose access to the latest Google versions of Android. But for the moment, at least, the US pressure has fired up nationalist support in China itself, where its market share reached 42% in Q3. Apple, meanwhile, saw its Chinese market share fall to just 5% in Q3 – a far cry from the days when it was the No 1 aspirational buy.

Apple’s issue remains its decision to focus only on the high end of the market. This worked well when it was perceived as having the “best phones”. But today, aside from Apple aficionados, it is hard to find many consumers who believe Apple offers features that other phones lack. And on that basis, it makes little sense to pay the vast premium being demanded for the brand image. 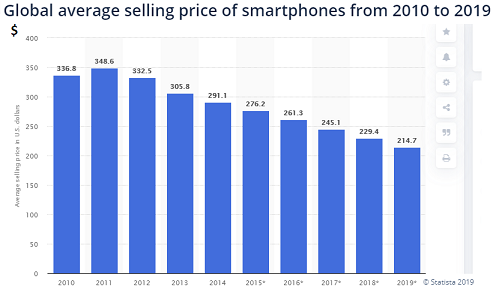 The writing has been on the wall for smartphone pricing for some time, as the Statista chart confirms.  The average global price peaked as long ago as 2011 at nearly $350 ($400 in $2019).  Since then, it has almost halved in inflation-adjusted terms to $215 today.

As I noted back in 2015, when Apple was riding high, it was inevitably going to have to introduce cheaper models to maintain market share.  But instead it chose to “double up” on the luxury end of the market, putting profit ahead of volume.  Last year’s decision to stop reporting unit sales for its key products was therefore no great surprise, given that no company wants to be always reporting bad news. 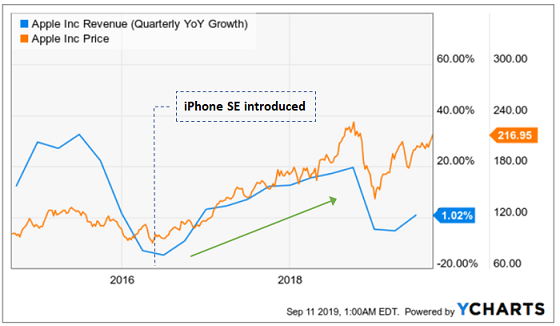 In turn, of course, this has driven a growing disconnect between the stock price and Apple’s revenue growth, as the chart shows. Between 2016-2018, they moved in line in terms of percentage change. Revenue has flatlined since Q3 2018’s peak of $266bn, whilst profit has fallen 3% due to declining iPhone sales.

But investors continue to bid up the stock price from its low of $142 at the start of the year to $260 today. Technical indicators confirm it as a ‘strong buy’, but as common sense would suggest, also warn that the stock is highly over-bought:

One day, as I noted back in August, investors may start to realise that low cost smart feature phones with a 4G connection are the new growth area.  Reliance’s Jio service is now offering them in India for just Rs 800 ($11), half the original 2017 launch price, whilst Vodacom South Africa is also offering them att Zar 299 ( $20).

The next billion users are more likely to be buying these than iPhones. Suppliers to the industry might want to rethink their current strategies.  At some point, perhaps not too far away, consumers in western countries might also start to realise these can provide most – if not all – of the features that they really need.