Polyethylene markets (PE) are moving into a crisis, with margins in NE Asia already negative, as I have been forecasting.  Scenario planning is now a matter of potential life or death for companies likely to be impacted over the next 12-18 months.

The collapse in margins is already quite dramatic as the chart based on ICIS data shows:

The same pattern is also true for the other main grade, High Density PE (HDPE). 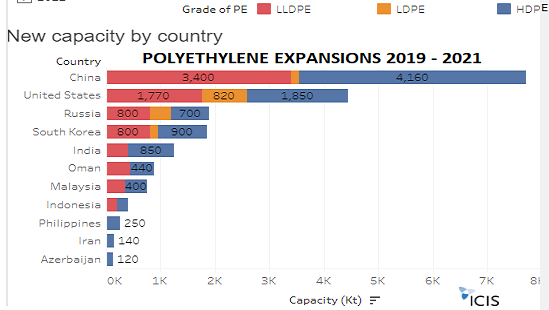 And, of course, today is only the start of the problems. As the second chart shows, there are vast amounts of new product coming online between 2019 – 2021 in both LLDPE and HDPE:

The problem is that the fundamental assumptions behind the shale gas investments were simply wrong:

Essentially what happened is that companies stopped planning for themselves and allowed Wall Street to set their strategy, as one CEO told me:

“You may be right, but every time I mention shale on an earnings call, the share price goes up $5.”

It is now too late to wind back the clock.  The US product from the integrated players has to go somewhere as their ethane feedstock is essentially a distressed product. If they don’t use the ethane to make ethylene and its derivatives, they cannot produce the shale gas.

The result is shown in the charts above, based on data from Trade Data Monitor 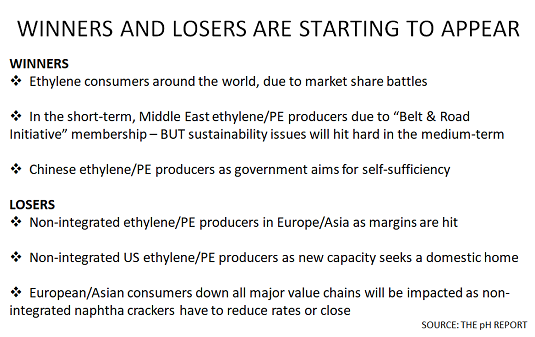 The world is therefore starting to divide into Winners and Losers, as the chart suggests.  Non-integrated ethylene producers around the world are particularly at risk:

But there are also wider risks for European and Asian consumers down all the major value chains, as they will be impacted by lower cracker rates.

Scenario analysis must now be a top priority for potential Loser companies.  There really is very little time left, as the margins chart confirms.

PREVIOUS POST What’s next for Brexit and chemicals?
NEXT POST ACS Chemistry & the Economy webinar on Thursday