Saying you “won’t do something” may stop you digging a bigger hole for yourself. But it doesn’t help in deciding what you should do instead. That’s OPEC’s dilemma today on raising oil output.

Everything seemed simple enough a year ago, as the pandemic took hold:

It is already clear, however, that demand is unlikely to have returned to pre-pandemic levels by Easter. 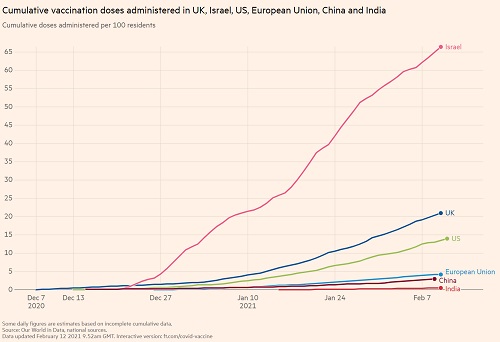 The above chart provides up-to-date detail on vaccination progress in the main economies – USA, EU, China, India – plus the two leading vaccinators, Israel and the UK:

This suggests OPEC, or at least key members of OPEC, are going to have to make some difficult decisions over the next few weeks. They have two specific problem areas to solve:

OPEC NEEDS TO ACCEPT THE OIL AGE IS ENDING

The key issue is summed up in the chart, showing Iran expects oil sales to continue beyond 2040. In reality, it is unlikely this will be possible, given the pressures to meet climate change targets.

So countries and companies have a stark choice. They can sell maximum volumes today, or risk their reserves becoming stranded assets in the future. As FGE energy have warned:

“The dominant narrative is still to keep production optimal long-term – without realising time is running short – and to avoid exporting oil as raw material – without appreciating the refining business may not be a profitable business in the long-term anyway.”

I have been warning here since last March that the pandemic was not going to be a 9-day wonder. I have also been highlighting former Saudi Oil Minister Yamani’s warning that by 2030 “there will be a huge amount of oil, and no buyers”.

OPEC and the oil industry may not like this message. But ignoring it, doesn’t make it go away.

As Shell, BP, TOTAL, Repsol and other oil companies are proving, first-mover advantage is critical when paradigms shift. Their opportunity comes at the expense of those who sit back and do nothing.