Home Blogs Chemicals and the Economy Rising US interest rates, US$ and oil prices set to pressure financial markets

Rising US interest rates, US$ and oil prices set to pressure financial markets 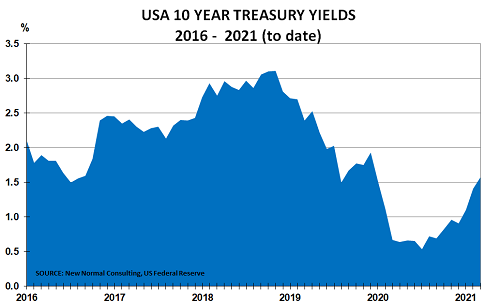 Everyone who has ever played the Beer Distribution Game on a training course knows what is happening in supply chains today. A small increase in underlying demand is rapidly leading to a massive increase in ‘apparent demand’.

As the New York Times reports, “the pandemic has disrupted every stage of the (supply chain) journey.”  And so purchasing managers have been spooked by bottlenecks:

So they are now over-ordering everything in sight. And in turn, investors are assuming a turbo-charged recovery from the pandemic is already underway. Although

“Second order” disruption is now underway as interest rates start to soar, along with the value of the dollar. As the chart shows, the benchmark US 10-year rate has trebled in recent months from its all-time low of 0.5%, taking the value of the US$ higher as well. 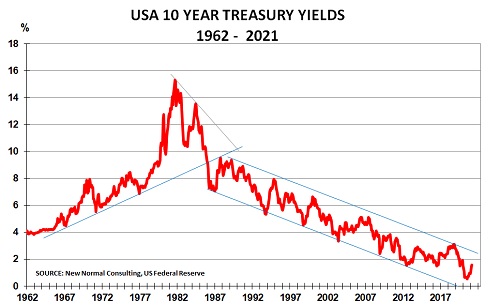 The “tram-lines” in the second chart confirm that rates are simply repeating the patterns of the past 30 years. They tumble when the economy seems to be weakening. And then they rise when things seem to improve again. Essentially, they mimick a rubber ball bouncing down a staircase:

After last year’s collapse, it is no surprise they are now bouncing higher again as the economy starts to reopen. And they could potentially double to 3% without breaking through the “tram-lines”. But even at today’s levels they will have a major impact on key areas of the economy.

Mortgage rates are rising, and will impact housing markets in the crucial spring selling season.

Similarly, higher rates are making auto loan defaults more likely. And OPEC+’s decision to squeeze the oil market will reduce consumer spending, as people are forced to cut back on the discretionary items that drive economic growth. 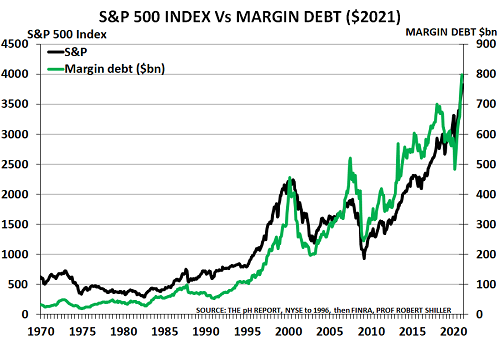 FINANCIAL MARKETS ARE AT MAJOR RISK

The key risk, however, is in financial markets. Investors now assume that central banks will never let markets fall. And so as the chart shows, they have borrowed a record $800bn in margin debt.

Unfortunately, they are only now starting to realise that Joe Biden, unlike his predecessors, is focused on jobs rather than stock markets. As a result, the Federal Reserve is now hoping to see higher rate and inflation as a sign of economic recovery. As the head of the Richmond Fed told the Wall Street Journal last week:

“In fact, I would be disappointed if we didn’t see yields, you know, rise as the outlook improves,” Mr. Barkin said, noting that bond yields remain meaningfully lower than pre-pandemic levels.  Mr. Barkin also said he expects inflation to rise, but not to problematic levels, and that he isn’t worried that another round of fiscal aid will cause price pressure problems by overheating the economy.”

‘Bubble stocks’ such as Tesla are already feeling the pressure. It is down by a third since late January, as it has little chance of competing successfully with majors such as Ford, GM and VW, now these are focused on the Electric Vehicle market.

And the danger, as in all market downturns, is that the selling becomes self-fulfilling as realism returns. The key risk is focused on the likely response from the Exchange Traded Funds and high frequency traders who now dominate the major markets:

The end result will be a bubble-free market, driven by earnings and analysis rather than momentum and stock-market cheerleaders. But it will likely take a few years to unwind the damage that has been done over the past 20 years.