Weak demand – and the illusion of a return to “normal” 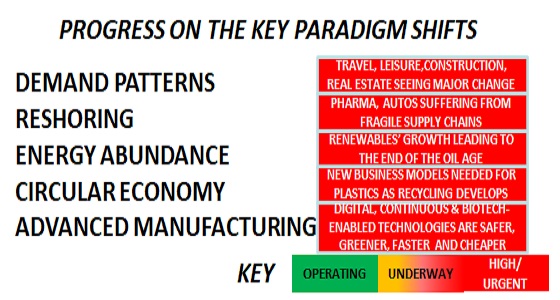 My new interview with Real Vision focuses on the major changes underway in the economy. Our analysis of the chemical industry, auto market, and technology sector, suggests a return to the “old normal” is highly unlikely.

Instead, major changes are underway in Demand Patterns, Reshoring, Energy Abundance, the Circular Economy and in Advanced Manufacturing.  For example, as I discuss in the interview;

Supply chain chaos. Companies normally slow down in December ahead of the holidays, but not in 2020.  In the chemical industry we saw the single largest increase in capacity utilization we have ever seen in December.  The reason was all the supply hiccups around the world – not just semiconductors, but basic equipment such as containers. Buyers have been forced to place multiple orders to try and ensure that at least one of them is delivered. So what we are seeing is a surge in “apparent demand”, not a boom in real demand.

Reshoring.  Companies and governments having been having problems for over a year with obtaining pharma raw materials from China/India due to export restrictions. Now we have a worldwide shortage in semiconductors – causing car firms to cut back production. Toyota in the States and many others have all cut back production because they can’t get hold of these vital components. We’ve talked about “just in time” in the past, and now what we’re talking about is “just too late”.  Reshoring is therefore becoming inevitable.

Circular economy. If reshoring is taking place and if you’re moving to a circular economy, you’re not going to want to use same old manufacturing technologies from the past. Instead you will want to use digital, continuous, biotech-enabled technologies. They are safer, greener, faster and cheaper. Inertia has been a powerful reason for doing nothing in the past – but the pandemic has changed the conversation.  We all know that change is inevitable, and it is clearly now starting to move forward.

Electric vehicles.  When someone comes to write the history of EVs, they’ll be clear it began with two developments. China’s focus on the need to reduce air pollution, which was well above WHO danger levels; and the Dieselgate saga in Europe which meant auto manufacturers had to move rapidly to EVs in order to avoid major fines from 2020 onwards for exceeding CO2 emission levels. Today, the rapid decline in battery costs means that popular models will be cheaper than gasoline/diesel cars within a couple of years.

US manufacturers are also now moving forward, with GM ending gasoline/diesel sales by 2035. And as Ford have noted, EVs:

“Are likely to catch on more quickly among commercial customers, who are motivated to clamp down on operating costs. The electric Transit’s maintenance costs over an 8-year span will be about 40% lower than those of a gasoline-powered model because it doesn’t require upkeep such as oil changes. Vans often operate in city centres on relatively regular routes, and can easily recharge overnight in depots.”

Oil markets. Transport accounts for more than 2/3rd of US oil demand, and so the writing is clearly on the wall for OPEC+ and the shale producers. European companies such as BP and Shell have already seen the writing on the wall, with BP suggesting that 2019 may have been the peak for oil demand. US producers were a bit more cautious, hoping that Trump might be able to add a few years to the outlook.  But with Biden now in charge and focusing very strongly on Climate Change and the green economy, I expect them to catch up quickly.

The Brexit debate has always been about politics, not economics.  So it was no ...

Rising US interest rates, US$ and oil prices set to pressure financial markets

Everyone who has ever played the Beer Distribution Game on a training course kno...

The appalling tragedy in India reminds us that the Covid pandemic is very far from being solved. And...