The Rebirth Of Naphtha Cracking 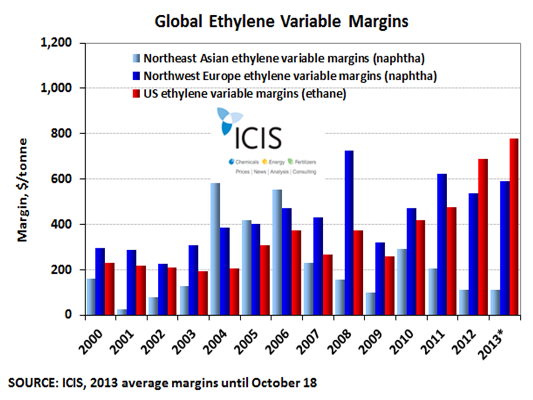 Might cracking naphtha in Asia, Europe, and perhaps even the US, once again become so attractive that it starts to challenge the big advantage currently being enjoyed by cracking ethane?

Yes, perhaps. Opportunities could arise to take advantage of distressed supplies of naphtha from refiners under severe loss-making pressure. Shutting many refineries down in the West might seem the obvious answer. But refiners and petrochemicals producers confront social as well economic factors that could prevent closures.

Plus, contractual obligations to customers and environmental clean-up cost will, as always, act as further barriers to closing refineries.

Petrochemicals producers could thus find themselves in strong positions to get hold of very competitively priced supplies of naphtha, either through favourable long-term supply deals – or maybe even through acquiring refinery operations.

The further involvement of governments in rescue packages for refinery and petrochemical plants should also not be ruled out. Government loan guarantees might, for example, make it more affordable for petrochemicals companies to make the investments necessary to improve their integration with refining.

And, of course, the co-product another aspect of the story. The value of butadiene has plummeted of late, but it may return. The future of propylene and benzene returns must also be factored into the equation. With new supply increasingly dominated by ethane cracking – which could tighten the markets for these co-products – the flexibility in the range of output offered by a naphtha cracker is an obvious further advantage.

Given the strength of the ethane advantage in the US up until mid-October (see our above slide) you could well think that we have lost leave of our senses.

But one US petrochemicals producer, back in July, told the blog that it was maintaining the ability to fairly quickly and cheaply switch back to cracking naphtha if feedstock economics changed significantly.

Why might naphtha once again become a very strong alternative to ethane, even in the US?

Because of the fall in gasoline demand, which will have the knock-on effect of increasing the availability of naphtha globally.

Gasoline demand is declining in the US at a result of car-ownership rates peaking at 2.05 per person in 2006 before falling to 1.95 in 2011. The average number of miles driven per person in the US has also been declining steadily since 2004, when it reached 9,314 miles. The figure for 2011 was 8,494 miles, a level last seen in 1996, according to this Financial Time article.

One could take the view that, once the US economy achieves a sustained recovery, car ownership will rebound in the States.

But what if demographic factors result in a very long-term decline in auto ownership? Older people not only spend less money on cars, but also want to live closer to rejuvenated US city centres where they can walk, rather than drive, to the doctors, the shops and friends’ houses. This could be one of the factors in the growth in US urban living described in the FT article we have already linked to above.

In Europe, where we think demographics are also reshaping demand, all the above might also apply.

And what about the influence of modern telecommunications and social media on the way that young people in many parts of the world interact?

“When I was 17, I was desperate to own a car so I could get a girlfriend, as every girl I liked wanted to date a boy who owned a car,” said and an Australian friend of the blogs.

“Also, none of us owned a mobile phone back in the 1980’s because the few that existed were the size of several house bricks and were very expensive. So we all wanted cars so we could drive around to our mates to arrange nights out.

“Now youngsters, like my 11-year-old son, all have mobiles and live ‘virtual lives’, where they build relationships and keep in touch via the Internet.

“Many of the kids I know are, as a result, delaying taking their driving test well into their twenties.”

Returning the US – still the world’s most-important autos market by volume despite the growth of China – there are other negatives for gasoline consumption, which are:

Globally, also, a lot of new refinery capacity in the Middle East and Asia has been added to serve bullish forecasts for the growth in Chinese transportation fuels demand in general – both gasoline and diesel.

But what if, as we have discussed before, China’s auto demand grows a lot more slowly than some people expect? Will this present further opportunities for petrochemicals producers to get hold of distressed supplies of naphtha from hard-pressed refiners?

And finally, of course, and probably most importantly  of all: What about the price of oil?

We have become accustomed to $100 a barrel for crude, or thereabouts, but supply is now plentiful – for instance, thanks to hydraulic fracturing and horizontal drilling (the same technology that has led to the shale-gas boom), US crude production is expected to total 7.7m barrels a day this year. That would be 50% higher than in 2008.

When and if fiscal stimulus is withdrawn, crude prices could easily fall through the floor because supply is increasing and demand –  for the reasons we have already outlined – is weakening.

We could thus be heading for a period of gas and oil-supply abundance that will make petrochemical feedstock costs in general historically very cheap.

There will be only be one slight problem for anybody who runs away with the idea that building new naphtha crackers is justified: Demand.

The focus should instead be on making best use of the capacity already on the ground.