Grangemouth Viewed Through A Wider Lens 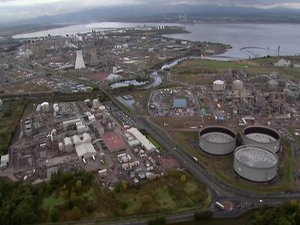 THROUGH the narrow lens of stand-alone cost competitiveness, the threatened refinery and petrochemicals complex in Grangemouth, Scotland the UK, (see picture) can be viewed as having a very questionable long-term future.

For example, Britain’s refineries are viewed as small, old and lacking in sophistication.

And it can be argued that they are further hampered by the fact that they produce too much gasoline and not enough diesel, as demand in Europe is heavily weighted towards diesel.

Plus, Europe’s refineries are struggling to export surplus gasoline to the States because US gasoline demand is on the decline.

Modern super refineries that have been recently built in the Middle East and Asia are exerting further competitive pressure.

And then, of course, associated petrochemicals plants in Europe confront a huge wave of new and exceptionally competitive North American capacity. As much as 64% could be added to US ethylene capacity if all the projects – which are based on very cheap ethane via shale gas – go ahead.

But we think that it vital to look at the wider economic value at stake here. For example, as far as the refinery goes, the UK’s Independent newspaper writes in this article:  “The decision to close the petrochemical plant [has] raised fears that the refinery next door would also shut down permanently, potentially dealing a significant blow to the North Sea’s oldest and biggest oil field – the BP-operated Forties field 110 miles east of Aberdeen [in Scotland].

“The oil produced by the field is a constituent of the benchmark Brent Crude price and comes ashore through the Forties Pipeline System, which delivers about a third of the North Sea’s total production directly into the Grangemouth site.

“Grangemouth supplies steam and power to BP’s Kinneil terminal in the Forties field. About 70 North Sea platforms were forced to shut down or reduce production in 2008 when a strike at Grangemouth closed the terminal and pushed world oil prices higher.”

Switching to the petrochemicals side of the story, this ICIS news article points out that:

And let’s look through an even wider lens. As fellow blogger Paul Hodges points out in the same article we linked to above: “The large downstream UK plastic converter industry which uses polyethylene [PE] and polypropylene [PP] has to look overseas for more of its raw materials. This will adversely impact the UK trade balance in the short-term.”

“In the medium-term, it means that companies are more likely to shut because their costs are higher due to the need to import. The UK is already suffering from high-priced energy, and this could well be the straw that breaks a few camels’ back.

“A need to increase imports will increase costs for the converter’s customers in packaging, consumer products, automotive etc., while also creating supply chain issues around delivery schedules,” he added.

“Thus there is a clear risk that over time this will encourage downstream companies to rationalise production in the UK and import instead to meet UK demand.”

Paul, in this blog post, also calculates that production at the site has a sale value of £1bn per year ($1.6bn), and a final value in food packaging, consumer packaging and automotive parts of around £5bn per year.

Yesterday, signs were hopeful that a deal might be done to save the site following a change in stance by Unite, the UK trade union representing Grangemouth’s workers.

If the deal happens, then INEOS would be able to go ahead with plans to spend £300m on adding US shale-derived ethane import capabilities at Grangemouth.

“INEOS is trying to compete in Europe by building more cracker feedstock and ethylene supply flexibility. It has 1m tonne/year capacity ethylene import terminal in Antwerp, through which it can tap into supplies of deep sea ethylene. It can import ethane at Rafnes in Norway to feed its cracker there. In Europe INEOS is ethylene short,” writes my colleague Nigel Davis in this ICIS Insight article.

THE INEOS Grangemouth story, whatever its outcome, raises some wider issues. These include:

If we include supposedly uncompetitive capacity into estimates of future cracker and derivatives supply, will there be sufficient room for all of the numerous US projects?

How will the picture also look if demand is weaker than some people anticipate?