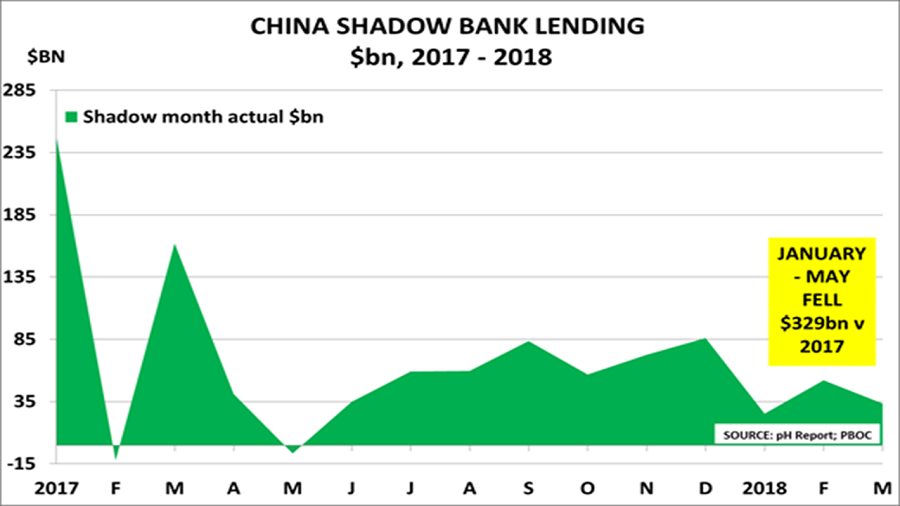 CHINA’S Q1 2018 polypropylene (PP) imports were down by 20% year-on-year as apparent demand (net imports plus local production) rose by just 1% on the steep fall in the availability of lending. Meanwhile, overall polyethylene (PE) imports were up by 12% as apparent PE demand grew by 9%.

Does this mean that the fundamentals of China’s PE market are much, much better than those for PP? No.

The surge in Q1 PE imports seems to have been partly the result of local speculators buying overseas LLDPE film cargoes to speculate in the Dalian Commodity Exchange’s futures contract in LLDPE film (C4 or butene grade). Q1 LLDPE imports were up by no less than 20%.

During the first quarter, prices on the futures exchange were higher than import prices, so creating the opportunity for profits.

The Dalian also has a futures contract in raffia-grade PP. But as domestic supply meets nearly all local needs, there is little room for speculators to buy overseas raffia-grade cargoes in order to gamble on the exchange.

Market players need to assess how much LLDPE inventory speculators are still holding to gauge what impact this will have when the volumes are released onto the physical market. The assessment will be incredibly difficult because of the fragmented and complex nature of China’s PE supply chain, but there is clearly a risk here.

Sure, some of the Q1 LLDPE imports will have of course met real demand in the booming China internet sales end-use market.

Demand for expandable LLDPE has been soaring because of the boom in internet sales and the severe restrictions on imports of scrap or waste cardboard that China introduced in January.

These restrictions were part of China’s clampdown on imports of all types of waste, including polymers. Imported waste cardboard used to be used to package internet sales, but now expandable LLDPE is being employed instead.

The dramatic fall in imports of scrap PE resulting from the restrictions could also be behind the 9% rise in Q1 PE apparent demand. This compares with our full-year 2018 estimate for real consumption growth (consumption adjusted for inventory distortions) of 6.5% over 2017.

Scrap PE imports so far this year have totalled just 18,000 tonnes as against 2.4m tonnes during the whole of 2017. But it is important to remember that only around 30% of PE scrap imports used to end up finished products, as contamination was so high that the rest had to be either buried in landfills or incinerated.

There is another reason for caution over the strong growth in apparent PE demand in Q1. Consider this article from the China Daily. Government-owned media provide important guidance to policy direction. The China Daily writes:

The State Post Bureau and another nine government agencies in November issued guidelines that require half of external packaging to be biodegradable, 90 percent of bills to be electronic, and packaging for each parcel reduced by 10 percent by 2020.

The country’s top standardisation administration issued new guidelines in February that require packages for express delivery goods to be thinner and more recyclable effective from September.

This is an early sign of what I believe will be a major push by Beijing against the domestic plastic rubbish crisis.

Thinner packaging will combine with a rapid growth in recycling plastics as this will a.) Help China escape its middle-income trap and b.) Boost China’s international reputation, given that the majority of global plastics rubbish crisis emanates from just one river in China, the Yangtze.

Is this only a long-term threat to growth in virgin PE demand? Not necessarily. As the China Daily also writes in the same article, e-commerce companies and the state-owned post office have set ambitious targets for green packaging. For example, Cainiao Network Technology Co Ltd, an Alibaba affiliate, has pledged that all of its delivery sheets will be made from renewable materials by 2020.

Firstly, the above chart is an update of my ongoing coverage of the largely overlooked sharp decline in the availability of lending in China. January-May 2018 shadow lending, which is credit issued by China’s private banks, was down by $329bn over the same period in 2017.

Shadow lending is now at just 9% of total social finance (TSF). The last time shadow lending was such a small part of TSF was back in 2002, long before China turbocharged its economic growth through the world’s biggest-ever economic stimulus packages (TSF is lending via both private and state-owned banks).

It is also important to note that TSF was also down again in January-May. This indicates that not all the fall in the availability of shadow lending is being compensated for by greater availability of financing from the state-owned banks. January-May 2018 TSF was $150bn lower.

This further confirms what I have been arguing since last October’s pivotal 19th National Party Congress. Xi Jinping has greatly strengthened his political position. He and his fellow reformers are able to press ahead with one of their job objectives for 2018 and next year – deleveraging. I can see no reason why this will not continue.

A clear sign that the credit squeeze is affecting the plastic processing sector comes from the latest National Bureau of Statistics survey of credit conditions amongst China’s manufacturers. The Bureau’s end-May survey found that 40.1% of companies reported that they lacked financing, the third month in a row that the percentage had increased.

The second negative relates to another of Xi’s top objectives – tackling China’s air, water and soil pollution crisis. In a statement released last week, the new all-powerful government bureau, the Ministry of Ecology and Environment, said that it will expand environmental inspections to more cities and regions.

The inspections will run from 11 June this year in 28 April 2019 and will target Beijing-Tianjin-Hebei and nearby areas, reports Reuters. Also targeted will be the Yangtze River Delta region, including Shanghai, and Jiangsu, Zhejiang and Anhui provinces, and some 11 cities in the northwestern provinces of Shanxi and Shaanxi.

Two hundred teams with a total of around 18,000 inspectors and support staff will conduct this inspections, three times the workforce that took part on the winter air campaign that ran from last September to March 2018.

This confirms my earlier prediction that this year would see an intensification of the anti-pollution campaign by Xi and his fellow economic reformers.

For China’s lower-value plastic processors, this will mean more shutdowns because of environmental inspections. Some of the shutdowns will be permanent as China tries to achieve two objectives at the same time.

Objective one is to get rid of manufacturers with poor environmental standards without the funds to make improvements to meet the tougher new pollution laws. The second objective is to streamline manufacturing by getting rid of overcapacity in some sectors, improve economies of scale and reduce corporate debt.

In the long term, China in its eastern developed provinces will end up with a state-of-the-art plastic- processing sector. Processors will be fewer in number, but bigger in scale and will operate higher-value machinery that will require higher-value resins. This will be a big positive for China’s economic development.

But in the short term, you should expect some loss of PE demand as smaller-scale plastic converters are forced to shut down.

There is one major short term benefit to PE demand from the environmental campaign, however, and that is in the consumption of high-density PE (HDPE) natural gas pipes. China is spending a fortune upgrading domestic heating systems from highly-polluting coal to natural gas.

This, though, did not translate into strong growth in imports of all HDPE grades in Q1 this year: Net imports were up by just 1% over the same period in 2017.

A gradual economic slowdown or something much worse

I believe that the 9% growth in apparent PE demand in Q1 will not be reflected in real demand growth for the full year. Our forecast of 6.5% growth in real consumption seems more realistic.

But this is our base case and is built around our forecast that China’s GDP growth will reach 6.7% in 2018. This would be only a moderate deceleration from 2017’s actual growth of 6.9%.

There is clearly, though, another scenario you need to consider and that is GDP growth being considerably lower as a result of a global trade war. A trade war has moved another step closer with President Trump’s decision to impose $50bn worth of Chinese goods.