US Risks Losing Access To 82% Of Global PE Consumption Growth, 80% Of Exports 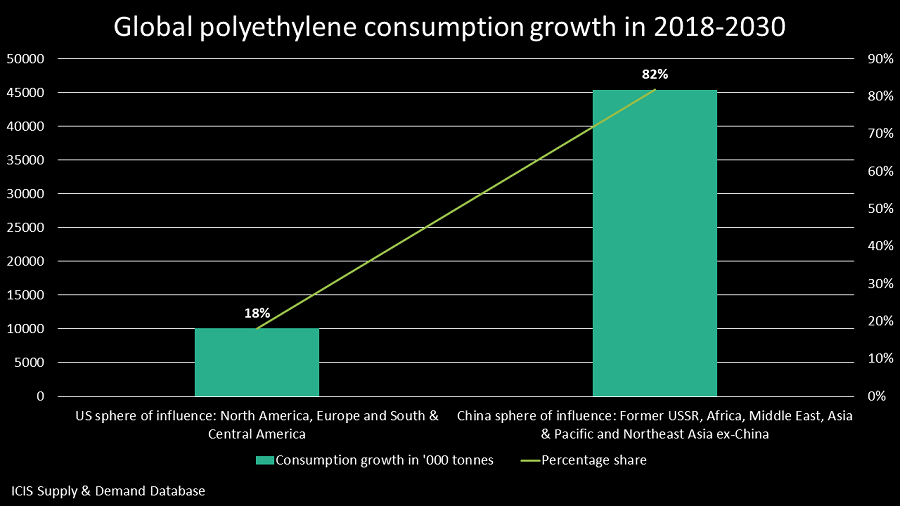 PERHAPS this week’s low-level trade talks between the US and China shouldn’t only be judged on the basis that they are low level, involving officials of mid-level seniority who are therefore not empowered to achieve major breakthroughs.

The talks on 22-23 August (23 August is when 25% Chinese polyethylene (PE) tariffs on US imports are due to come into effect) could establish the groundwork for a Trump/Xi summit in November.

A November summit could take place just ahead of the US mid-term elections. Any positive optics from the summit might play well with Trump’s core supporters – i.e. the “fixer in chief” fixes another major global problem, just as he fixed the North Korean nuclear crisis after his summit with Kim Jong Un in June.

Cynicism is of course very easy in circumstances such as. So, in order to distance myself from cynicism – because, as always, I want to offer you an objective view of the risks ahead – the outcome of a Trump/Xi summit could go beyond just favourable optics. Here is an outcome you should consider:

Under such circumstances, the “all is right with the petrochemicals and polymers world” school of thought might feel entirely vindicated. Members of the school could argue that all the strategic planning that had been done by petrochemicals companies to map the impact of tariffs on trade flows and economic growth was a waste of time.

But the above outcome might not of course happen. And even if it does happen, will President Trump back away from his “America First” approach? Would the president want to back away given that America First is such a core part of his philosophy?

Let us assume for argument’s sake that the president sticks with America First after a successful Trump/Xi summit. At the heart of America First is bringing manufacturing jobs back to the US through the use of tariffs, with the economic pressure of tariffs on China aimed at making it largely dismantle its Made in China 2025 programme.

China has apparently stopped talking as much about Made in China 2015, and the connected Belt and Road Initiative (BRI), in the state-owned media. This could be an attempt to ease tensions with the US.

But is it realistic to expect China to give up on Made in China 2025 in order to avoid a full-blown trade war with the US? In my view, absolutely not. The programme, in some form or another, has to continue if China is to escape its middle-income trap.

China would have delayed falling into the trap by ten or more years if it hadn’t been for its One Child Policy. But the loss of some 400m births whilst the policy was in place means it now confronts a race against time.

It has to raise the value of manufacturing industries very quickly in order to meet healthcare and pension costs that are rapidly increasing because of an ageing population. As its population quickly ages, its working age population is shrinking. China is as a result losing its competitive edge in low-value manufacturing.

This means that China simply must innovate at a rapid pace. The foot on the innovation accelerator is being pressed-down hard because of big government subsidies supporting hi-tech industries such as robotics, semi-conductors, electric vehicles and artificial intelligence.

If China eased back on government subsidies, which is at the heart of the US complaint against China’s “unfair trading practices”, the country’s economy would surely stagnate.

If President Trump remains in office – and my base case is that he will be re-elected in 2020 – we could face a classic example of an unstoppable force versus an immoveable object. Even if a Trump/Xi summit leads to a truce in the trade war, both sides might find it impossible to avoid an eventual re-launch of hostilities.

The world has been turned on its head by the rise of populist politics – not just in the US but in many other countries as well.

The considerations for adding capacity have essentially been, “Do I have the feedstock advantage, the technology that will give me operating reliability and good economies of scale, and can I get the logistics right?” Location hasn’t mattered because of the ability to export to anywhere in the world.

In the future, where you build your plant could matter as much, if not more, than feedstock advantage, technology and logistics. There is no point in ticking all of these three traditional boxes if you are behind trade barriers that make it impossible for you to export to China and its economic and geopolitical partner countries.

How this could play out in PE

The ICIS Supply & Demand Database is of huge value in this kind of strategic thinking. The database is again the source of the chart at the beginning of this blog post.

The chart shows our estimate of PE consumption growth between 2018 and 2030 and how this could be divided up into spheres of influence. You might see this as the worst-case outcome from a US-China impasse over trade. Or perhaps is this is a realistic-case outcome?

In 2018-2030, we forecast that total global PE consumption growth will be 55.5m tonnes. I divide the world into two sphere of influence.

The first centres on the US which maintains open trading relationships in North America (the US itself, of course, Canada and Mexico). Geographic proximity and geopolitical influence allow it to do the same in South & Central America and Europe.

The rest of the world becomes part of a huge new free trade zone that China wants to create, far bigger than the EU. This will include the 82 countries in China’s BRI. The whole of the Asia & Pacific and the Middle East are in the BRI. So are several African countries.

Why? Because as the US pulls back from aid to the developing world, China becomes are more important source of finance for the bridges, roads, railways and electricity plants needed by Africa. Northeast Asia ex-China aligns with China because it cannot afford to miss out on the growth opportunities.

Note that I have placed Turkey in the Asia & Pacific region whereas in our database we include Turkey as part of Europe. I decided that because Turkey is a developing country, it is more likely to align with China. Asia & Pacific also includes India, Pakistan, Bangladesh, the rest of south Asia and the whole of Southeast Asia.

The end-result, as you can see from the top chart, is that 82% or 45m tonnes of global PE consumption growth is within the China sphere of influence. The US has access to just 10m tonnes – 18%.

The same logic, or you may think lack of logic, can applied to the world’s net import countries regions (countries and regions where imports are in excess of exports).

The end-result is just as striking. The US will have access to 75m tonnes of global net imports (exports from its perspective)– 20% of the 367m tonne global total.

China and its partners will have access to 293m tonnes or 80%. This will in effect mean that China sources nearly all of its vast import needs from major exporters in its sphere of influence – the Middle East, SEA and India.

If I crunched the data for any other polymer or petrochemicals, the outcome would be very similar.

Should PE and other petrochemicals companies think again about investing in new US capacity based on access to cheap shale-gas derived feedstock? In my view, yes.