Chinese PE Tariffs Come Into Effect: The Impact On The Global Business 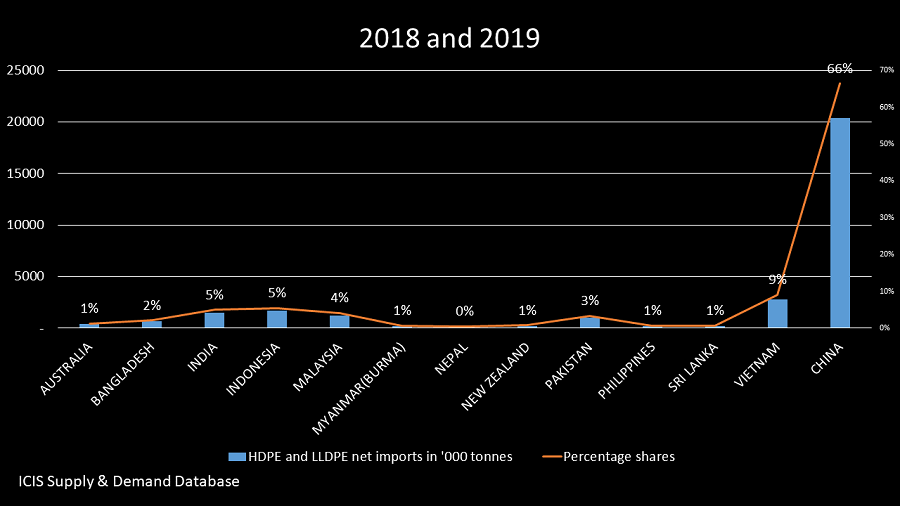 CHINA’S 25% import tariffs on all grades of US high-density polyethylene (HDPE) and 93% of the grades of linear-low density (LLDPE), which came into effect yesterday, look set to cause major damage to the global PE business. One of the biggest casualties could be the earnings of US PE producers.

We shouldn’t just look at the still very good variable cost margins of US PE producers and assume from that they will be able to absorb the 25% import tariffs and still sell to China.

Several US PE players have substantial capital costs they need to pay back as a result of new investments. Earnings promises have also been made to shareholders based on no 25% import duties.

This may mean that US producers will have to attempt to pass on some, or all, of the 25% duties to Chinese customers. Chinese customers may be unwilling to buy US cargoes  carrying extra duties if this year’s sharp depreciation of the yuan versus the US dollar persists. This has already made PE import cargoes expensive for Chinese buyers, even without additional duties.

Let’s assume all the above points are wrong. What if Chinese buyers avoid US cargoes for patriotic reasons given that the US/China trade war seems to be intensifying?

This week’s trade talks between the US and China, sadly, resulted in little progress. Patriotism may result in a sharp dip in US sales to China extending to low-density PE (LDPE). LDPE was on the original list of US grades that were to be the subject of Chinese tariffs, but was then taken off the list.

Meanwhile, China could be in a good position to be able to avoid having to buy US cargoes. Domestic PE production was up by 6.6% year-on-year in H1 2018 with imports 23.3% higher.

Much of these increases were comfortably absorbed by booming domestic demand. The heavy restrictions on imports of recycled or scrap plastic, which were introduced from January of this year, has boosted consumption of virgin resins. But there has been some growth in inventories, according to our ICIS China team.

All of the alternative markets to China are smaller than China and many are much, much smaller. Do they have the room to take US PE without significant harm to local naphtha-based players? Might these players respond by successfully lobbying for trade protection measures?

Do these smaller markets always have plastic converter industries sophisticated enough to absorb the US C6 and C8 LLDPE non-metallocene and metallocene grades that are a big part of plans for new production?

If not might US producers have to switch to greater production of lower value C4 LLDPE and commodity grade HDPE from LLDPE/HDPE swing plants? What effect would this have on earnings?

We also have to consider the impact on global PE demand of the crisis in Turkey. Before the crisis began, we had assumed that Turkish PE net imports would grow from around 1.6m tonnes in 2017 to 1.7m tonnes this year and to 1.8m tonnes in 2019.

We will probably have to revise-down these numbers. PE volumes displaced from Turkey will have to find a home elsewhere.

In the hands of traders

There is another issue with smaller markets. Because volumes in these markets are smaller, the container-freight costs of shipping each tonne of PE could be higher than shipping to China.

What about backhaul issues? Will these smaller markets have enough finished goods to fill container ships to head back to the US? If not, this could further add to freight costs.

Next comes the problem of penetrating a wider number of export markets. Do US companies have the sales and marketing teams big enough to rapidly raise sales volumes to a large number of smaller markets with very diverse cultures, customs regulations and economic needs?

Could this mean US producers will have to let traders handle bigger volumes of material? Commissions to traders may further erode US PE company earnings.

The above chart gives you an idea of the potential complexity facing US producers. It compares the size of projected 2018 and 2019 net import demand (imports minus exports) in China in ‘000 tonnes versus a range of other markets across Asia Pacific.

I have also given you percentage shares against the total net imports for these countries. I have excluded countries in an overall net export positions.

I could have also included Africa. There wasn’t enough space on the chart, however. The complexity of penetrating often very small African markets is probably the highest in all the emerging markets.

What about the broader economic impact of the US/China trade war? Oxford Economics is forecasting that the trade war may result in Chinese GDP growth of 6.4% this year compared with actual 6.9% growth in 2017.

Growth at 6.4% would still be stellar in comparison with any other country and region. But might growth at this level lead to a dip in China’s overall PE imports in H2 2018 and in 2019, even taking into account the boost to Chinese PE demand delivered by the scrap-plastic restrictions? This would mean more oversupply pressures on markets outside China.

The US has imposed import tariffs on Chinese plastic products. In 2017, under one customs code which doesn’t capture all US plastic products imports from China, the value of Chinese shipments was $16.3bn.

This made China the biggest exporter to the US, ahead of Canada in second place at $11bn. If the US tariffs stay in place this is another reason to believe that Chinese PE imports will decline in H1 2018 and in 2019. PE resin is quite often shipped to China to be re-exported as finished plastic products.

You then have to consider the impact on the Chinese economy of US import tariffs across a broad range of other finished goods.

Next comes downward pressure on the Chinese economy from government campaigns against bad debt and pollution. Both are negative for short term growth.

China might ease back a little on its bad debt campaign. But credit availability will be a lot lower in 2018 than in 2017. There will be no let-up in the environmental campaign because it is too economically, socially and politically important.

China is a long way from being an economic island. It is intricately tied into the economic fortunes of the rest of the developing world where PE demand growth would surely suffer if the Chinese slowdown continues.

The same applies to the developed world including export powerhouses such as Germany, which is heavily reliant on exports to China.

Point by point you might well be able to dismantle all the above arguments. I apologise in advance to US companies if they have effective plans already in place to deal with the challenges I have outlined above – or if I’ve got the challenges wrong.

But the basis for taking my arguments apart should not be, “Don’t worry, there is no need to plan for such a bad outcome as both sides will come to a deal. This trade war will be over in a few months.”

PE and other petrochemicals and polymers companies have to instead assume that this trade war will go and on, model the impact on their businesses and think of ways of mitigating the damage.

We all hope the trade war comes to an end very soon. But companies simply must prepare for the opposite outcome.

PREVIOUS POST Plastics Rubbish Crisis: How To Pick The Winning Polymer Producers
NEXT POST Don't Forget Turkey And Its Importance To Global Polyolefins