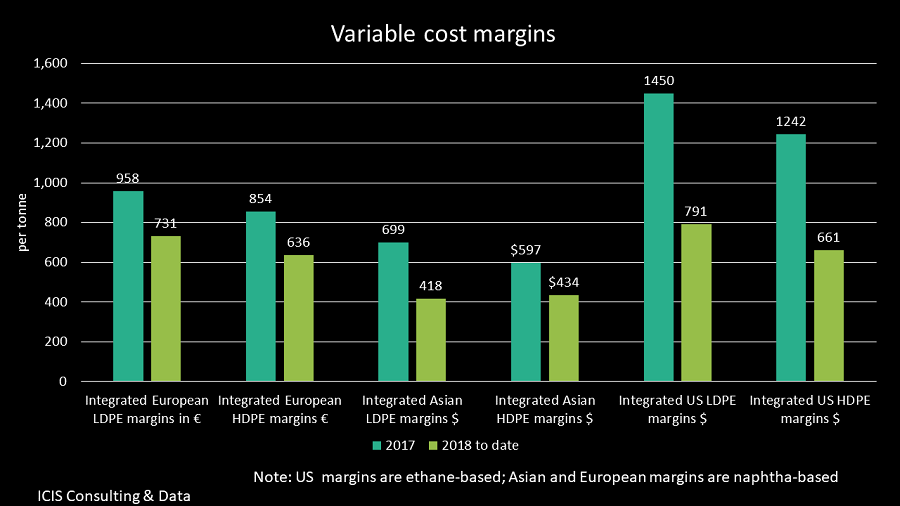 LET’S FIRST of all take a close look at what the above chart is telling us about the damage already done to polyethylene (PE) margins before considering what could happen next.

US high-density PE (HDPE) margins are 47% lower in the year-to-date versus to 2017 and low-density (LDPE) margins are 45% lower. Both are at their lowest levels since before 2012. We don’t cover linear-low density PE (LLDPE margins, but the trend will be the same.

Is this purely because of higher ethane prices which recently reached their highest level since February 2014? No, because this year’s margins are lower than in 2014.  For example,  in 2014, HDPE margins averaged $1,368/tonne. So far this year, they have averaged $661/tonne. So something must be different.

Now take a look at the chart below. 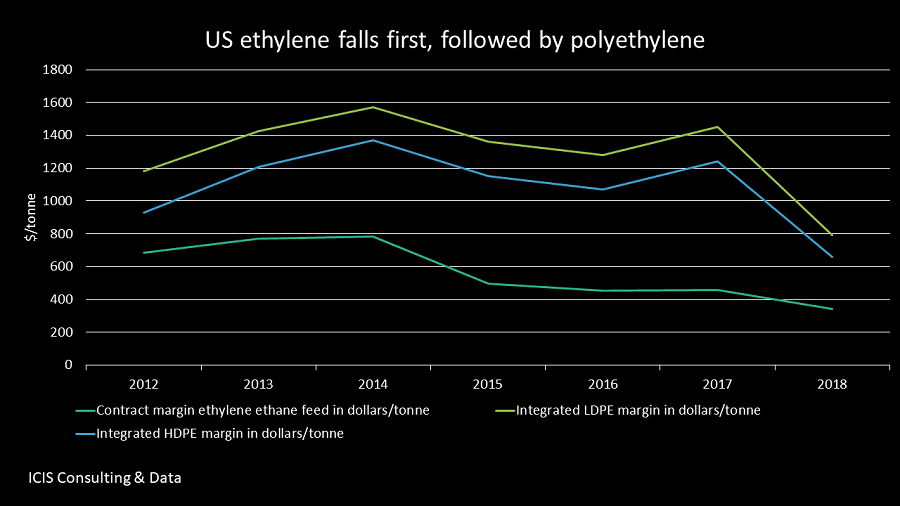 It shows the well-documented collapse of ethylene margins that occurred because new US steam crackers had started up before downstream PE plants. Now, though, several more downstream plants have come on-stream. This helps explain the dip in PE margins from the beginning of this year.

European and Asian margins are also down so far this year if you again refer to the chart at the beginning of this post. The biggest fall is in Asian LDPE margins which are down by 40%. Other margins are around 25% lower.

Here is what has happened:

These are only variable cost margins. For US producers in particular the full margins picture is likely to be considerable worse because of high capital costs from new investments. And what of promises that have been made to shareholders in US PE companies? It seems possible that these expectations are being undershot.

For Asian European producers, the ability to pass on higher naphtha costs has obviously been quite limited – and this is before big volumes of new US material start arriving in the region.

As always, I very much hope what follows is wrong. And again I must stress that I am not expressing a view on the rights or wrongs of US government policy – and President Trump’s supporters will strongly argue that his approach will benefit the US and the rest of the global economy. But it is always essential to plan for the downside as well as the upside.

Take another look at the chart at the beginning of this post. It still shows a major advantage for US producers.

In the past, the only response from competitors would have been, “Ah well, this is the nature of capitalism and free trade and so let’s get on with fixing our businesses.”

Asian producers have added value through the production of higher-value grades of PE to counter the American advantage, as well as focusing more on propylene derivatives. Asian producers outside China have also played on being  geographically closer to China and closer relationships with China.

European producers have improved integration with refineries and have focused on switching from higher cost naphtha feedstocks to liquefied petroleum gas etc. Old crackers, which have the advantage of being fully depreciated, have also been constantly improved to boost energy efficiency and economies of scale.

But this may not be good enough from now onwards because we no longer live in a world of unfettered capitalism and free markets. Driven by the US, we are moving towards one of more protected economies behind trade barriers.

For PE, what we know already as that the US/China trade war could continue throughout 2019 and beyond. The reason, in my view, is that this trade war goes beyond trade. It is also about the US hedging against the political and economic rise of China and this quite obviously requires a long-term approach.

We also know that it might not be just US HDPE and LLDPE sales to China that suffer. These two grades are the subject of 25% tariffs. LDPE sales could also suffer because of rising anti-US feeling in China.

If you include China in 2019 total global net imports (imports minus exports) this come to around 23m tonnes. That would mean the US would have to achieve a market share of 16% of these net imports, based on our estimate of its net exports (exports minus imports) of 3.8m tonnes.

Take China completely out of the equation and global net imports available to the US shrink to close to 10.5m tonnes. This would require the US to gain a 36% share of this remaining market, again assuming net exports at 3.8m tonnes.

You might think it unlikely that the US will be unable to sell any PE to China. But what if sales are 50% down on this year? That could be enough to flood other markets in the context of a global economy made weaker by the US/China trade war.

It thus seems possible that Asian ex-China and European PE producers will turn to the regulators for help, using the chart at the beginning of this post as evidence of unfair advantage. This could lead to antidumping measures or other forms of trade protection against US PE imports.

By the time you read this blog post US stock markets may have bounced back and all might seem right with the world again. And anyway, of course, yesterday’s declines were insignificant. US markets remain close to record highs.

Right at this moment, the semi-panic is the result of President Trump warning in a Bloomberg interview that the US may pull out of the World Trade Organisation (WTO).

And rebuffing an EU offer to scrap car tariffs, he said: “Their consumer habits are to buy their cars, not to buy our cars . . . the European Union is almost as bad as China”. This raises the prospect that the “car wars” will begin, with tit-for-tat US and EU tariffs on autos.

The White House, or the President himself, may, as I said, have dialled back on these comments by the time you are reading this article. Perhaps by the end of today a new NAFTA, or post-NAFTA, deal may have been agreed, including Canada  as well as Mexico.

Don’t be distracted by short-term news flows and the idea that President Trump’s approach is purely transactional – designed to get trading partners to the negotiating table.

I believe that the president has a long-term political vision, evidence of which is the geopolitical nature of the US dispute with China. Because of this vision, it would be wrong to discount the possibility that the US may eventually pull of the WTO and engage in a full-scale trade war with the EU.

What then of PE and other petrochemicals trade flows? Market 1 could be the US and its remaining trading partners and Market 2 could be China, most the developing world and perhaps some of the developed world as well. Both markets would function very separately, behind trade barriers.

In such circumstances charts like the one at the beginning of this post would become less relevant. Comparing US margins with Asian markets would not be necessary because very little, if any, US PE would be moving to the big markets in Asia.