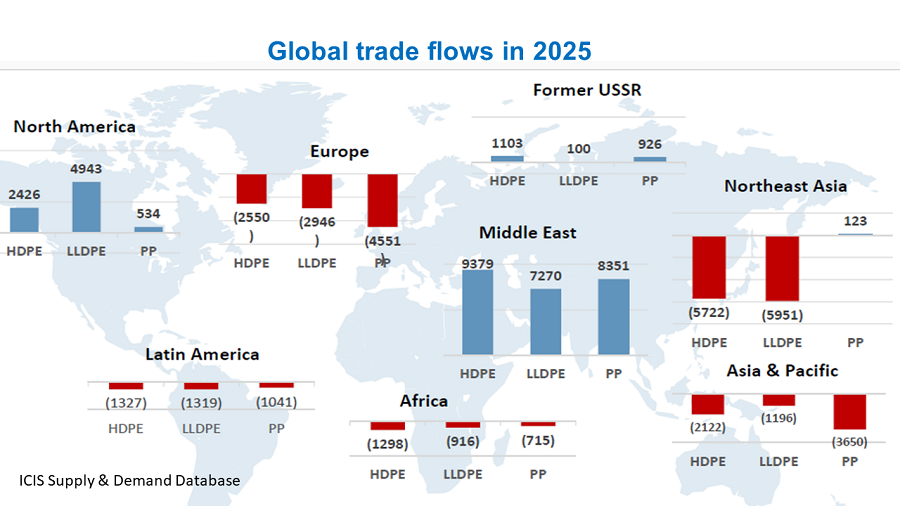 THE above map global shows our base-case forecasts for global trade flows of HDPE, LLDPE and PP in 2025. It is the result of lots of hard work and smart thinking around feedstock costs, logistics costs and demand growth etc. and is a good start to your scenario planning process.

The map must, as I said though, only be the start of your planning as there is a significant risk that that we are heading for a world divided by trade barriers, with these trade barriers permanent. Our base case can only come true if the pretty much borderless world most of us have all grown up with stays in place, enabling the free-flow of goods and services from one country and region to the next.

This is where our ICIS Consulting team can help. We can provide you with the detailed thinking behind the above map and help you build alternative scenarios, where major shifts in trade barriers and geopolitics result in very different outcomes.

Sure, President Trump may not win the next presidential election (I actually think he very probably will). But even if he doesn’t, Americans are so unhappy with the results of globalisation that another White House with a similar protectionist mind set may replace the Trump White House.

In Europe, the same demographic and technological forces are in play as in the US. The pushback against globalisation is the result of the lost economic opportunities resulting from ageing populations and automation.

The EU may do more than muddle through and survive. It could even expand and strengthen. But there is also a significant risk that Brexit will be followed by more restrictions on the free movement of goods, services and people within the EU. This, for me, is a much more likely outcome.

Meanwhile, as much of the developed world pushes against globalisation, China has to push in the opposite direction. It has no choice if it wants to escape its middle-income trap whilst also finding new, overseas homes for the low value manufactured goods in which it is no longer enjoys competitive advantage:

Meanwhile, the BRI seems almost certain to become a much bigger source of the oil and gas, petrochemicals feedstocks and petrochemicals and polymers that China needs to maintain its economic growth. How would this change our base case view of PE trade flows?

Whilst the West could end up more fragmented with more local-for-local manufacturing chains, the BRI may become a huge and largely self-reliant trading zone. It  could end up as big as 40% of global GDP involving around 70 countries.

The map can be restructured in another way, where instead of a fragmented West and a very united BRI – which mainly comprises the developing world – you end up with two competing global trading blocks. One would be led by America and its trading and geopolitical allies and other by China and its allies.

There is another very important element in all of this and that is the rise of legislation to deal with the global plastics rubbish crisis. We have gone beyond a tipping point in terms of public opinion towards single-use plastics and there is no turning back. The chart below shows that more than 50% of global PE consumption and almost one-third of PP consumption goes into single-use plastics. 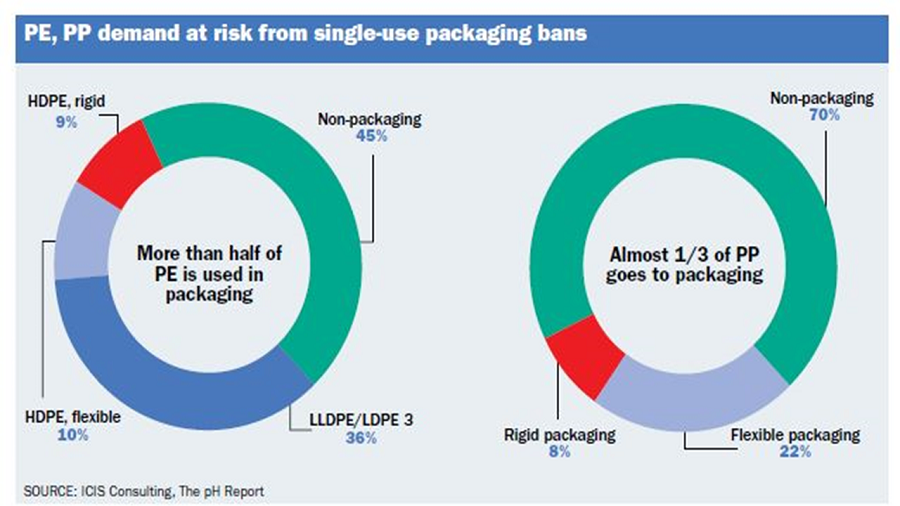 The very economic nature of the recycling industry is local. As is therefore the case with rising trade barriers, the growth in recycling has the potential to reshape HDPE, LLDPE and PP trade flows in very different ways than we assume in our base-case map.

Do not assume that this is only really a developed world issue. In our base case, China is the biggest destination for PE exports (it is of course the main reason for the big Northeast Asia deficits). But China is the biggest source of plastic rubbish in the world’s oceans.

PE companies that export to China may as a result face new environmental export duties based on this fact, with China itself reducing consumption of virgin PE as it also invests heavily in solving its plastics rubbish crisis.

The volumes of virgin PE moving between different countries and regions could be smaller than in our base case as virgin PE is replaced by large quantities of recycle material. The material would be recycled back into single-use finished goods and used as feedstocks to replace fresh hydrocarbon feedstocks.

A major problem for CEOs is that most of their teams have spent their entire lives in a world of low trade barriers. This makes even accepting that the world could change very difficult. But failure to accept and then plan for radical change would be a major commercial risk, threatening the very survival of some polymers companies.