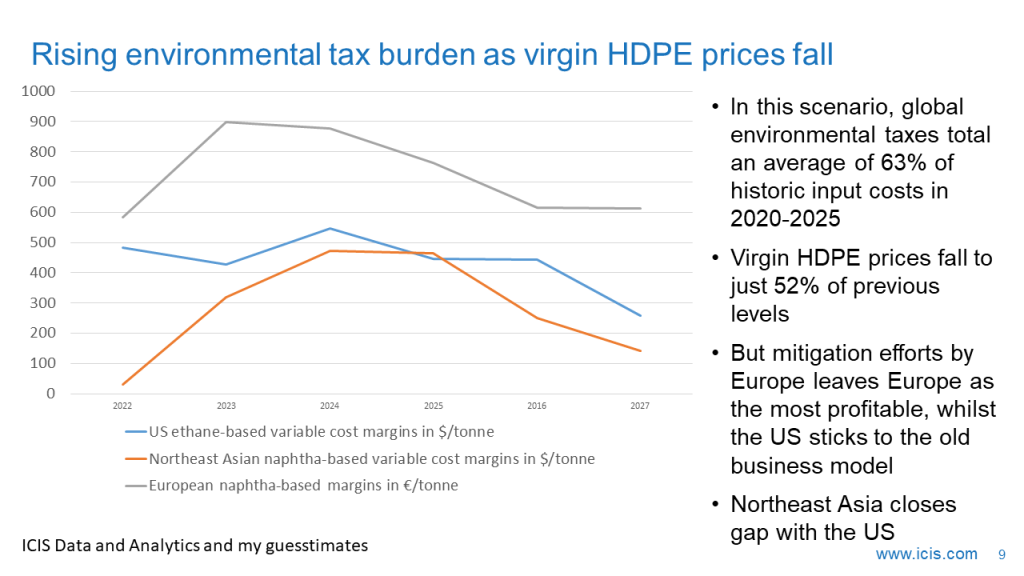 ALMOST all countries late last week signed a UN deal to monitor the flow of hard-to-recycle plastics to poorer countries. The US was amongst the few countries which declined to sign the agreement.

The deal is the result of the increase in contaminated plastic waste exports to Indonesia, Malaysia and Vietnam etc. following China’s decision in early 2018 to heavily restrict its imports of recycled plastic. Until last week’s agreement, the West had only slightly adapted its “out of sight out of mind” approach to plastic rubbish by diverting pollution from China to other smaller developing countries.

The UN deal puts the ball firmly back into the court of the West. Instead of dumping its plastic pollution problem on the developing world, it will now be forced to adopt more recycling initiatives at home. The agreement seems to have real teeth as it classifies plastic waste as hazardous under the 1989 Basel Convention.

Do you really think it will stop here? Of course not. Polymer producers will, I believe, be compelled by future legislation to take responsibility for the complete lifecycle of the plastic pellets that they sell.

The long- established business model of many polymer producers is exactly the same as that of the plastic waste exporters – out of sight out of mind. As soon as the polymer pellets leave factory gates, the producers have to take no responsibility for the final disposal of the products.

Not for much longer. Unless polymer producers can demonstrate that the plastic bags, bottles and films made from their pellets don’t end up being dumped in oceans and rivers – primarily in the developing world where the vast majority of marine plastic pollution emanates from – they will be hit by punitive environmental tariffs.  The use of blockchain technologies might be one way in which legislators will monitor the lifecycle polymer pellets.

Making the case for net benefits

Who will be the winning polymer producers in this new competitive environment? It will be the ones that invest in creating collection and recycling facilities in the developing world in order to demonstrate to legislators that the net environmental benefits of, say, the linear-low density polyethylene (LLDPE) film grade pellets that they sell are positive.

In the case of LLDPE film, if its impact on marine pollution can be addressed, there is a very strong argument to be made that this product hugely benefits the environment through preserving food and thus boosting food security. Decaying food is also the third biggest emitter of methane, a gas that adds to global warming, behind China and the US.

But it obviously won’t be enough for polymer producers to just invest in basic collection and recycling facilities in the developing world, where, very often, people have no choice but to dump plastic rubbish in the rivers and oceans because they have no access to any kind of rubbish collection system. Polymer producers must also invest in sophisticated mechanical recycling technologies, and possibly in chemicals recycling, as legislative pressure will also focus on the wasteful nature of current manufacturing processes.

Still not convinced? Then also consider a UN committee report, released at the start of this month, which estimated that one million of the world’s eight million species were in danger of extinction because of human activity, including plastics pollution. The global rate of species extinction “is already tens to hundreds of times higher than it has been, on average, over the last 10 million years,” said the report.

Here is one statistic, from the 145 page report compiled by 50 countries, which should shock you into action: Marine plastics threaten the survival of 44% of all seabirds.

The new economics of building crackers

It will be very interesting, in this context, to gauge the thinking of participants at this week’s Asia Petrochemical Industry Conference in Taipei. I will be speaking at this year’s event when I will express all of the above views. I will report back to the blog on the mood and tone of the event.

No doubt, as always, there will be lots of talk about the need to build lots more steam cracker-to-PE complexes to meet booming emerging markets demand. But every new project must be evaluated on the basis of:

Let’s try and imagine what this might mean for future margins. The chart at the beginning of this blog post takes historical ICIS margins data in the six years from 2014 to 2019.

For argument’s sake, I took our historic total input costs to make high-density PE in each of the three regions and added global environmental taxes averaging 63% to these costs in the six years from 2022 to 2027, with the taxes rising as the years went by. I then assumed virgin HDPE prices at 52% of their 2014-2019, based on greater substitution by recycled HDPE.

But in Europe and Northeast Asia (NEA), I assumed that producers were able to claim back all but 10% of the environmental taxes through investing in mechanical recycling and rubbish collection systems etc. And in Europe and Asia, I also assumed that major investments in recycled HDPE led to net pricing (virgin plus recycled HDPE) being 100% of virgin HDPE pricing levels in 2014-2019.

In the US, though, I assumed the full 63% tax burden because of failure to make any mitigation efforts. I also assumed complete failure to switch to recycled HDPE – and therefore the full burden of virgin HDPE prices falling to just 52% of their 2014-2019 levels.

This is bound to be wrong – of course! This is pure guesswork, and you may feel I’ve been very unfair on the US and way too optimistic for Europe and NEA. But I hope that it at least starts a constructive debate about the challenges and opportunities facing the polymers industry.