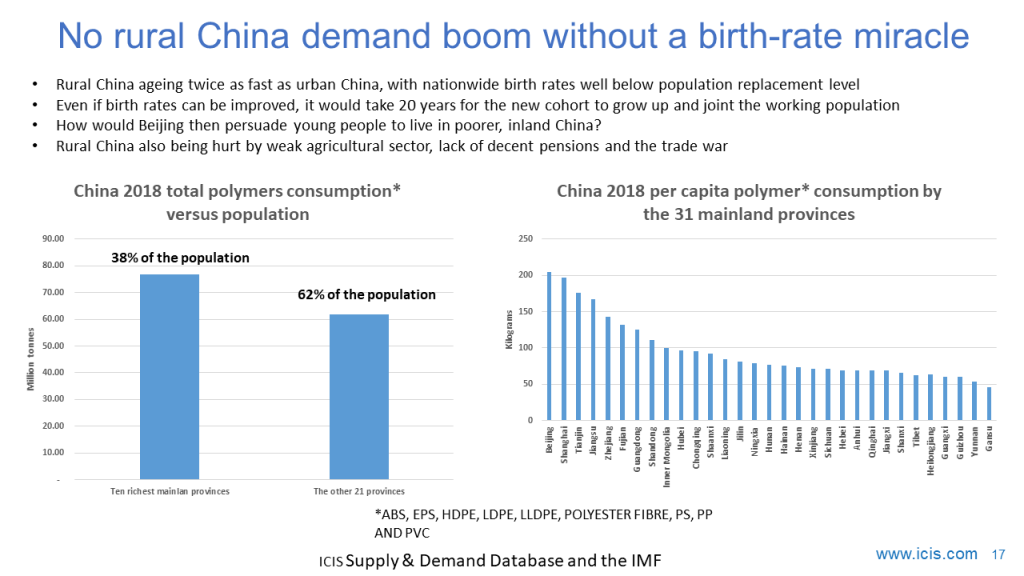 ONE DIMENSIONAL analysis of China would have you believe that as per capita income growth steadily improves in China’s vast hinterland, its inland provinces, huge volumes of petrochemicals and polymers demand will be added.

This analysis is built on the two decades-old government “Go West” campaign of huge investment in infrastructure aimed at opening inland China to not only the rest of China, but also, more recently, to much of the rest of the world through the Belt & Road Initiative.

Vastly improved road and rail links, a key part of the BRI, will, it is argued, allow goods manufactured in poorer inland China to move to overland to the rest of Asia and Europe. The theory goes that basic manufacturing jobs that can no longer be carried out in rich coastal China because of rising labour costs will increasingly move inland, with the improved road and rail links providing cost effective access for the goods produced to internal as well as external markets.

When you crunch the data, on paper at least, the opportunities seem stupendous:

It is true that some inland cities and provinces arebooming. Take the giant metropolis of Chongqing as an example and its province of Sichuan.

But here’s the thing: In 2040, a third of the total rural population will be 65 or over, double the ratio for urban China.  The rest of China is rapidly greying as a result of China’s disastrous One Child Policy. Ageing is even worse in the countryside because so many young people have left the countryside for the coastal cities over the last 30 years in order to work in export-focused manufacturing plants.

Encouraging these young people to return their ancestral homes is going to be a tough ask because of the generally bleaker economic opportunities in much of rural China, especially because of a struggling agricultural sector.

Why China’s agricultural sector is struggling

“The current situation is not optimistic, the countryside is returning to poverty,” warned Ma Wenfeng, an analyst from Beijing Orient Agribusiness Consultant in this South China Morning Post article.

Rural incomes, when remittances for relatives working in urban China are not included, have been in decline since 2014 – and they fell by a further 20% during the first half of this year, said Ma.

A big and probably politically insurmountable problem is the lack of individual land ownership. Collectivisation of land ownership was a key part of Communist Party reforms when it gained control of China 70 years, and so it is hard to see how these reforms can be reversed.

Lack of ownership means farmers struggle to leverage their assets to expand. What further limits economies of scale is that most farms are owned by families. The end-result is that compared with the US, where output from one farm feeds an average 146 people, a Chinese farm feeds just seven people, reports the SCMP, based on estimates from Rabobank.

Rural poverty has been somewhat relieved by Beijing giving farmers the freedom to lease their land and use the leases as collateral for loans. This has led to property booms in some rural areas. But there are also widespread reports of local governments acquiring land at knockdown prices from farmers, because the farmers lack firm ownership rights. Acquiring land in this way to build factories and real estate was a key part of the giant 2009-2017 economic stimulus programme.

Very weak rural pension schemes, which provide monthly payments of as little as $12 a month, are another problem highlighted by the SCMP.  Lack of disposable income means many rural residents cannot even afford the minimum payments to these pension schemes.

Despite government incentive schemes designed to boost rural consumer spending, there is little money left over at the end of each month to buy new washing machines and refrigerators etc., never mind the unrealistic dream of owning a car.

There is also the trade war

Official unemployment rates are as unreliable in China as the official GDP growth numbers. Officially, unemployment remains steady. But it stands to reason that given the trade war there has to be downward pressure on China’s manufacturing employment in its big coastal cities.

Supporting this conclusion are reports of an acceleration of the drift of manufacturing, such as plastic processing, to countries such as Vietnam as China’s entrepreneurs dodge trade-war tariffs.

Reuters writes:  While China’s official unemployment rate has remained steady, signs have emerged that sluggish domestic demand and trade friction with the United States have triggered increased layoffs in the country’s manufacturing sector.

An employment-tracking component of the Purchasing Manager’s Index – a snapshot of conditions in the sector – has been trending sharply lower since last year. The August [2019] reading slipped below 47 for the first time since the global financial crisis.

This means lower remittances from coastal to inland China from all the people who have moved to the rich provinces over the last 30 years.

Another reason to doubt the idea that petrochemicals demand growth will boom in inland China can again be found in the SCMP article. The newspaper reports that since 2012, the growth in rural incomes, even including remittances, has slowed down. This decline obviously predates the trade war and might reflect the longer term hollowing out of China’s low cost manufacturing on rising labour costs in the coastal provinces.

A healthy dose of scepticism

Chinese growth has been the great saviour of the global petrochemicals industry. As I’ve discussed before, there was first all the export-focused Chinese economic boom in 2000-2008 and then the domestic stimulus-focused boom in 2009-2017. Both of these eras are over for good for different reasons.

A healthy dose of scepticism is thus essential when you read petrochemicals demand growth forecasts which assume similar rates of growth as the 2000-2018 boom period – and especially the years between 2009 and 2017 when consumption growth went virtually off the charts.

You must be equally sceptical towards those who paint, as I said, a one-dimensional picture of the steady growth of petrochemicals demand further and further inland as China raises income levels in its rural provinces. Rural growth can only start to catch with the coast unless China can somehow addressing the challenge of an inland population that is ageing as twice as rapidly as on the coast. On this subject, as I wrote in February:

Let’s assume that China can fix its nationwide problem of low birth rates. It would still take around 20 years for someone to grow up, be educated and join the workforce. There are no shortcuts available here, I am afraid.

The solution is only 20 or so years away then? Sadly, no. Births per mother are not suddenly going to jump to 2.1 – the population replacement rate. –from today’s 1.6. Successful policies would instead lead to a gradual rise to 2.1, meaning it would take a lot longer than 20 years for China to fix its demographic deficit.

Assuming that China can achieve a boom in births, how would Beijing persuade young people to live in rural China, as it is likely to remain a lot poorer than urban China?

I could go on. There are also the sustainability issues – huge in China as they are everywhere – which should lead you to further question over-simplistic and very linear forecasts of ever-booming Chinese petrochemicals demand growth.

One more important conclusion from all the above is that, in my view, China cannot be treated just as on region for demand-growth forecasting purposes. It is essentially four regions: The rich coastal and southern province; the economically challenged northeast rust belt; the quite wealthy inland provinces immediately adjacent to the coastal belt; and very poor far western China.

The end of the world? No, as I keep emphasising, it just the end of the world as we have known it. We have moved from an era where strong demand growth, in China and elsewhere, was guaranteed into an era where petrochemicals companies have to work harder to emerge as winners. It will be a world driven by services and by solutions to societal problems, such as ageing populations.