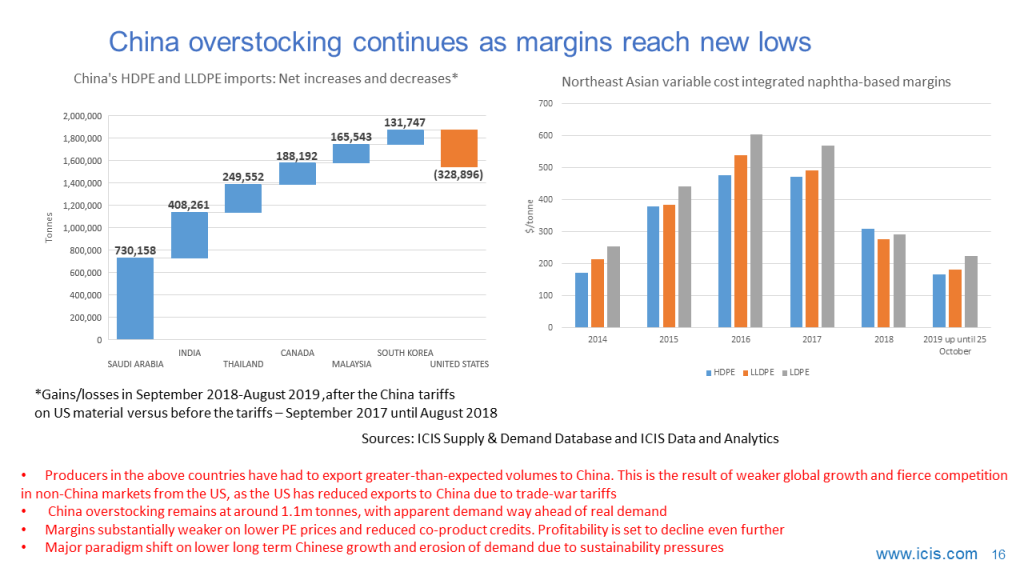 The core of the problem is that Chinese growth isn’t going to be anywhere near strong enough to comfortably absorb the flood of new US capacity. A flood really is the right term in a year when US exports for all the three grades look likely to be around 9m tonnes, up from 6.7m tonnes in 2018.

The US has sharply lowered its high-density PE (HDPE) and linear-low density (LLDPE) exports to China so far this year. This is the result of Chinese trade-war tariffs on US HDPE and LLDPE that now amount to 30%. The US has responded by raising exports to other markets such as Europe, Vietnam, Turkey, India and Malaysia.

This has created much greater competition from US material in non-China markets, forcing producers from countries such as India, Canada, Malaysia, South Korea and Thailand sharply raise their exports to China. The above chart on the left illustrates this point. Here I compare the net gains in shipments to US amongst the countries I’ve just listed in the 12 months after the tariffs came into force versus the 12 months before. Also included is the loss in US shipments during both these periods.

In the case of LDPE the US has substantially raised its shipments to China, as until early September there were no trade-war duties on LDPE. This again proves that when anyone can export big volumes to China they will do so. The economies of scale of shipping to China are unbeatable.

No matter how you crunch the data, China seems to be struggling to absorb all this extra material:

I’ve been told to be careful of taking import data like this in isolation without taking into account seasonal factors – e.g. the rise and fall of imports before and after the Lunar New Year, China’s two agricultural film-buying seasons and its peak manufacturing season for finished goods.

But the long term data show there are no major seasonal patterns in imports that might have led to a surge in January-September 2019 shipments that could fall away during the final three months of this year. I looked only at imports and not net imports as the swings in China’s exports were too volatile, given they were such small volumes.

Between 2000 and 2018, average month-on-month increases in imports across the three grades were between 10% (July) and 17% (April). November was the second highest month at 13%.  Here is the thing as well: Between January and September of this year, month-on-month imports increased by an average of 21% compared with the 2000-2018 average of just 13%.

The other aspect of the story is local production. If you add our January-September 2019 estimates of domestic production to the China Customs department net import data, you get the following three results:

The overall level of overstocking – of around 1.1m tonnes – is almost unchanged from the January-August period.

It has been suggested that our provisional production forecasts for January-September might be substantially lowered when the full-year data is available. But evidence on the ground suggests few, if any, major delays in start-ups or any other significant production issues.

Another argument against overstocking is that the Chinese market is booming, indicating no excess inventories totalling some 1.1m tonnes.

I am afraid not. Last year was an exceptional year because of China’s heavy restrictions on imports of waste or scrap plastics. This led to average demand growth across the three grades of 8.8% compared with our original forecast of only 5.6%.

Imports of scrap or waste plastics are now almost a zero, meaning no major further benefit from the switch to greater consumption of virgin resins. Plus the Chinese economy is quite obviously growing at a slower rate than in 2018. It is not just the trade war that has caused the slowdown. More importantly, it is major structural changes in the Chinese economy that indicate much lower growth over the long term.

This, in my view, makes it impossible for China’s January-September apparent demand to equal real growth. Growth is instead more likely to be in the region of our forecasts and quite possibly lower.

If the China market was really growing in line with apparent demand then why are margins so bad? Northeast Asian HDPE, LDPE and LLDPE margins are at their lowest levels since at least 2014 when we first began our assessments (see the above chart on the right).

The data behind our margins tell us that feedstock costs across the three grades averaged $2,696/tonne in 2014 during a year when Brent crude prices averaged $99/bbl. So far this year, feedstock costs have only been at $1,678/tonne with Brent at $71/bbl. Raw material costs cannot therefore be the cause of weaker margins.

In 2014, the ex-works, or FOB, price for the three grades averaged $1,463/tonnes compared with $931/tonnes in 2019. PE prices have collapsed despite substantially lower raw material costs. The problems must be PE demand and supply.

Co-product credits from selling propylene, butadiene and aromatics averaged $1,537/tonnes in 2014 versus $1,028/tonne so far this year. This indicates the downturn in other petrochemicals markets, with polypropylene particularly badly affected by the collapse in China auto sales.

How bad is it going to get?

You always start with the data and all the data clearly tell us that we are in a worse-than-expected industry downturn. You might think I am stating the obvious if you’re out there selling or buying in the markets, but some companies, at least publicly, are still supporting the notion that everything is fine. Telling this story is therefore very important.

How bad it gets in the short term will depend on whether we can stumble through the next few months without a global recession.

What could keep the wolf from the door for a while longer would be a US/China trade deal. It seems to me that President Trump is pushing very hard toward some kind of deal, however paper thin, in order to keep the US stock market strong. This would reduce the pressure on the president from the impeachment inquiries.

A trade deal would inevitably lead to a bounce in oil and in petrochemicals prices in general, leading to an improvement in sales volumes as buyers hedged against even higher prices.

But the fundamental underlying problems of the structural changes in the Chinese economy and the drift towards a bipolar world – US-led versus China-led trading blocs – will not go away. Neither will the erosion of PE demand as a result of sustainability issues.

We have entered a new paradigm where there won’t be the need to build big new steam crackers. And the crackers that have been built are going to face significantly lower margins than we are seeing today.

By John Richardson ONE DIMENSIONAL analysis of China would have you believe that...

By John Richardson DON’T WORRY, I am told, India is on the way. As China under...

Sustainability, the pandemic, demographics and geopolitics – how petchems companies will their define success