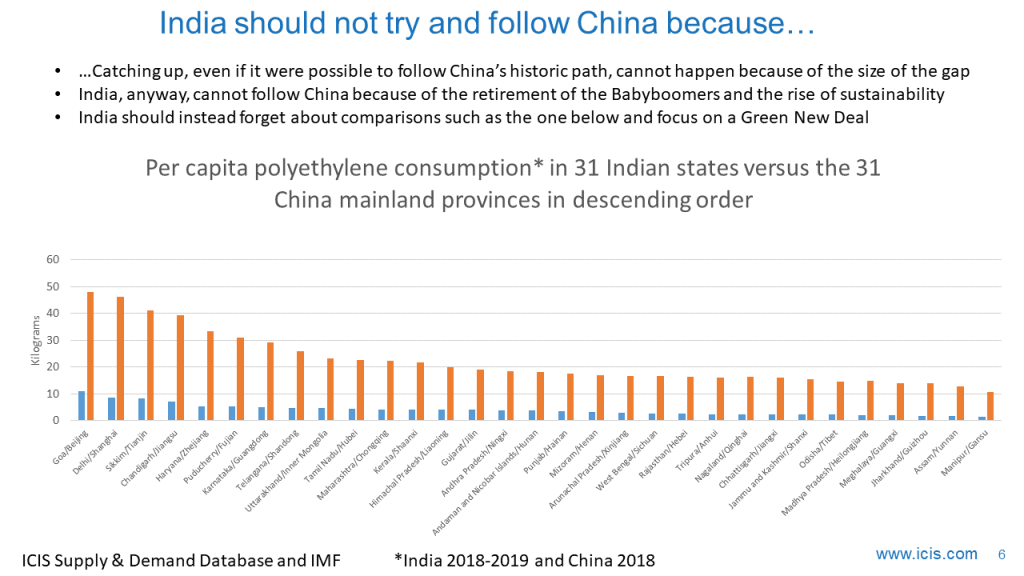 DON’T WORRY, I am told, India is on the way. As China undergoes major structural changes which guarantee much lower petrochemicals and polymers demand growth over the long term, it is widely assumed that India will pick up the mantle.

But that what happened in China was an economic, social and political one off. No other developing country can follow what China has done.

The first key event for China was Deng Xiaoping’s  southern tour of 1992 and the subsequent gradual opening up of the economy.

This very luckily occurred shortly after the collapse of the Soviet empire and the re-integration of the Soviet bloc into the global economy. Reintegration unlocked strong demand for cheap consumer goods, manufactured in ever-greater volume in China, as did very favourable demographics in the West.

The oldest Babyboomers were entering their peak earnings years. They had got the kids off their hands as their kids had completed university and the Boomers were at the peak points in their careers, a combination of which led to very levels of disposable income.

A key word in the above paragraph is “university”. It is often overlooked that this wasn’t just one of the biggest bulge of working-age people in global history. Crucially, also, the bulge was predominantly middle class as it was led by the Americans who won the Second World War economically as well as militarily.

In the immediate post-war years, the Americans were super rich rich and had lots of kids and these kids. The Boomers as a result grew-up in a world of great wealth and comfort during a time when we also saw an explosion of innovation in consumer goods.

A key part of this innovation was the invention of new polymer catalysts and other polymer-design breakthroughs that enabled the production of a much wider range of highly sophisticated consumer goods.

What happened in the US also soon moved to Europe as Europe was rebuilt, largely thanks to the visionary US Marshall Plan.

Here was another crucial factor: Many women were joining the global workforce for the first time, creating millions of dual-income families. This supported demand for consumer goods of greater convenience – time savers like the vacuum cleaner, the TV dinner and the microwave oven which are all made from and/or packaged in polymers.

Most of the Boomers, including me, gave little more than two hoots about the environment as we were woefully ignorant about the damage our conspicuous consumption was doing to our planet. All that instead mattered was spending more and more in order to “keep up with the Joneses”.

Back to China, which, as I said, benefited enormously from Deng’s reforms just at the time, during the 1990s, that the Boomers were entering their years of peak disposable incomes.

China was in a perfect position to meet this demand from the West because of its own baby bugle. UN Population Division data, collated by the World Bank, show that China’s birth rate peaked at 6.4 babies per mother in 1965 and has been on the decline ever since.

No repeat of stimulus on the scale of China

But this was a problem for the distant future in 1992. As Deng opened up the economy, and as the Boomers were desperate to waste lots of money on consumer frippery, hundreds of millions of young Chinese people were joining the workforce, keeping wages very low. A vast army of young Chinese people moved from the countryside to the cities to work in export-focused factories on the coast.

Next came China’s accession to the World Trade Organisation in 2001 and the resulting removal of quotas and tariffs that had restricted Chinese exports to the West. The Boomers had yet to start retiring in large numbers and so they still had plenty of money to spend on consumer goods that they didn’t really need.

Lots of cheap credit in the West kept the freight train of booming demand hurtling down the track until it was derailed by the sub-prime mortgage crisis.

When the Global Financial Crisis arrived, China, in a way that only China can do, pumped huge amounts of economic stimulus into its economy in order to turbocharge domestic demand and replace lost export sales.

No other country has the central control over its financial sector and its manufacturing sector to repeat this kind of stimulus. No other country also has the resources that China had back in 2008, the result of its dominance of global export markets.

Demographics are not always destiny

The Economist ran a series of articles on India last week in which it further underlined longstanding impediments to growth. These include highly restrictive land and labour laws that the Modi government has yet to reform, and a woefully inadequate education system that is failing to meet the needs of India’s very youthful population.

In China’s case its baby bulge was a benefit because its strong government was able to employ most of its young people in export-focused factories. But In India’s case, it is hard to see how its political system can achieve what was achieved in China. This makes the some 12m people joining the Indian workforce every year an opportunity that may end up being wasted.

India’s favourable demographics do not necessarily guarantee a favourable destiny. In the West, too, now that the Boomers are retiring in record numbers, it doesn’t have to be doom and gloom. But there are few signs of government policies adapting to rapidly ageing populations.

Back to India. Even if it were able to mobilise its army of young people to manufacturing cheap goods for export to the West, aka China, what would be the point?

There is no prospect of demand growth in the West anywhere close to the levels that lifted China in 1992-2008 because the West is rapidly ageing. When you retire you consume less. That’s simply a fact. There is no statistical debate to be had here.

The much lower number of young people who are around in the West compared with the Boomer years also think differently than their parents. This is a global phenomenon amongst the Millennials who share views via smartphones and social media. Young people in youthful countries such as Indonesia think the same way as their Western counterparts.

The Millennials think differently because they care a great deal more than two hoots about the environment. This is another reason why there is no chance whatsoever of India following in China’s footsteps and repeating the same stellar levels of petrochemicals demand growth that China saw from the 1990s up until now.

Focusing once again on polyethylene (PE), the polymer most exposed to the public and legislative anger over the plastics rubbish crisis, global demand will be destroyed. Particularly vulnerable will be low density PE and linear-low density PE because of the difficulties of collecting tiny scraps of plastic film and flexible packaging.

Applications will be banned such as the single serve pouch for selling a single measure of consumer goods to people in the developing world who are for instance too poor to afford a whole bottle of shampoo. In India, which of course has many poor people, the single serve pouch has been a significant driver of PE demand growth.

Look at the gulf in petrochemicals demand as it stands today between China and India. Because of this gulf, it should be impossible to think that India can catch up with China in any foreseeable time frame. This is even assuming I am wrong, which I am not, and India is able to follow in the historical footsteps of China.

The above chart illustrates how China and India compare in PE per capita consumption province by province and state by state.

As you can see, this staggering difference between countries with very similar-sized populations persists across the chart from left to right until we reach the poorest Indian state, Manipur, versus China’s poorest mainland province – Gansu. Manipur’s per capita consumption was just 1 kilogram in 2018-2019 against 11 kilograms in Gansu in 2018.

In total tonnes of demand, China consumed 30.7m tonnes of PE in 2018 versus just 5.4m tonnes in India during the same year.

Reflecting both China’s strong existing demand, the likely resilience of its economy and the inability of India to follow China’s lead, our S&D database predicts that by 2030:

Global growth in some petrochemicals and polymers will, I believe, fall into the very low single digits or even turn negative as sustainability pressures build. The same will apply even in rapidly developing countries such as India.

This does not have to mean a collapse in profitability if companies can get away from measuring themselves by growth in sales volumes, and if they ignore the misplaced excitement of India catching up with China.

Stop thinking of India in terms of China,and, more broadly, stop thinking of the history of this industry as being a guide to the future. We have entered a new paradigm where nothing will be the same again.

In India’s case what’s good for India is not to attempt to follow in China’s footsteps as this would be a waste of time and money.

The future for India is to instead adopt a Green New Deal through developing local goods and services that deal with India’s chronic pollution problems in its major cities. Out of the 20 most-polluted cities in 2018, India accounted for 13 of them and China just one.

Another part of a Green New Deal that can unlock billions of dollars of growth, and new local-for-local jobs, would be installing more solar panels and providing other forms of renewable energy to meet India’s electrification needs. According to official data, only 1,417 of India’s 18,452 villages, or 7.3% of the total, had 100% household connectivity in 2018. About 31m homes were without any power supply.

The deal would also need to tackle India’s chronic water crisis. No less than 21 major Indian cities, home to 100m people, face running out of groundwater by 2020. Water-borne diseases account for 21% of Illnesses in India.

There needs to many other aspects of India’s Green New Deal and similar environmentally-focused growth projects across the rest of the developing world,

If these New Deals do not happen a warning from a July 2019 UN human rights report will come true. The UN predicted that the world was fast approaching a “climate apartheid” where only the wealthy would be able to afford basic resources because of fatal droughts, famines and heatwaves.

The petrochemicals industry can be a great enabler of this transformation through making use of the innovation skills that led to the development of today’s wide range of highly sophisticated consumer goods.

Future profitability will not come from adding more and more tonnes of capacity as the capacity won’t be needed. This would be a waste of money. The future will instead be around using our capabilities to develop services which solve today’s environmental challenges.