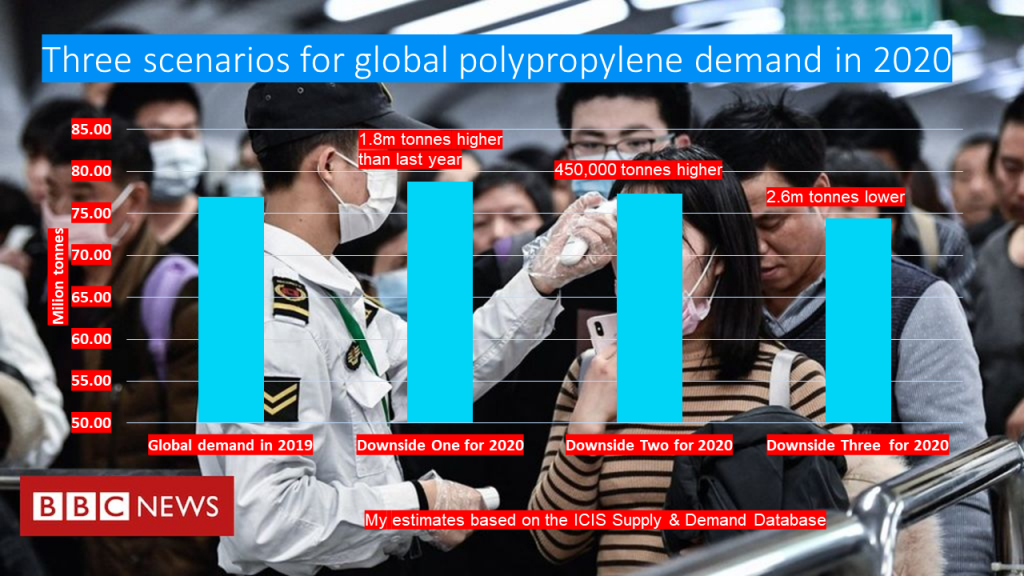 SOME GOOD news might be that official Chinese state media announced that the number of coronavirus cases outside Hubei province had up until Saturday fallen for 12 days in a row. But given the difficulty of diagnosing the disease, and last week’s sharp upward revision in Chinese estimates of the total number of cases, this good news needs to be taken with a pinch of salt.

Also consider that Wuhan’s central location makes it the biggest comprehensive transport and logistics hub in China, with rail and road connections to all surrounding provinces. Four hundred and thirty high-speed trains arrive in Wuhan every day, the airport has 3m passengers a month, and the port on the Yangtze River handles a large part of the 3bn tonnes of cargo that passes down the river every year.

Hubei’s GDP is $595bn, equal to Poland and Taiwan. Automotive, chemicals, steel, textile and machinery are all major local industries. Honda, Nissan, PSA, Renault, Dongfeng all have their most important production facilities in Hubei, as do companies such as Siemens, GE, Corning, Beiersdorf, and more recently Xiaomi. Their supply chains include thousands of Chinese companies – who are often supplying both domestic and international markets.

Even if the state media is right and the number of cases is falling outside Hubei, the unprecedented government campaign to prevent the nationwide spread of the illness is having a major negative impact on economic activity across most of China. The New York Times reports that residential lockdowns of varying strictness — from checkpoints at building entrances to hard limits on going outdoors — now cover at least 760m of China’s 1.4bn population, based on the newspaper’s analysis of government announcements in provinces and major cities.

It gets worse. I am afraid. As the Financial Times writes, companies around the world are running out of components, with the global electrical and electronic components sectors particularly vulnerable. China accounts for 30% of total global exports in these sectors, according to the United Nations Conference on Trade and Development.

The newspaper adds: Wuhan has emerged as a hub for China’s booming car parts and accessories exports, a sector that has tripled in the last decade while engine and motor exports have risen four times. Many of these factories have been closed.

The outbreak will keep global manufacturing in recession during the first half of this year, according to Allianz Research.

The crunch from the drop in exports of components from China is such that, as the FT again reports, Fiat-Chrysler may have to halt production in a few weeks with a Hyundai Motors plant in South Korea already shut down. There is talk that the strain on the vital German autos sector could help push the overall Eurozone economy into recession.

China is not only vital for the petrochemicals industry as the biggest source global source of polyolefins, paraxylene and ethylene glycols imports; it is also a critical source of exports of some polymers.

It is thus feasible that the manufacturers of the films and bottles that keep supermarket shelves stacked with goods will run out of enough supplies – and/or will face rising costs due to limited supply. Highly consolidated and therefore very powerful supermarket chains in Western markets seem unlikely to accept cost increases from plastic converters.

The effect on the service sectors will also be big. Think of all the Chinese students and tourists that will no longer be able to travel to Australia as its economy is also squeezed by reduced Chinese demand for imports for coal, natural gas and iron ore. Thailand is also heavily reliant on the tourist trade in general as people of all nationalities shy away from international travel. A total of around 150m Chinese tourists go abroad each year, spending some $279bn, according to the UN World Tourism Organisation

The luxury goods markets have long been buoyed by booming Chinese demand. Not this year as demand for the fripperies of luxury handbags and watches etc. is bound to suffer a significant decline.

The best-case outcome seems to be that the number of new cases in China and globally peaks over the next couple of weeks. It would then take one or two more months for the Chinese economy to get back on track.

But here’s the thing: Whilst inevitable major government stimulus should fairly quickly get the manufacturing sector back on track, what about consumer sentiment? It seems likely that Chinese buyers would take a good while longer to recover their enthusiasm given concerns that this disease could make a comeback.

What then of Chinese auto sales that are so important for petrochemicals and polymers demand? The January 2020 data was very bad, but this was in part due to five fewer working days than in 2019 – when the Lunar New Year holidays took place later on.

But a bad January for auto sales, and what is sure to be a dismal February, is going to make it difficult for new vehicle sales to rebound from their 8% decline in 2019. And remember that the Chinese auto market was already facing strong headwinds from an ageing population and unsustainable levels of consumer debt.

As I said, though, the Chinese government is sure to launch major new economic stimulus once the virus is under control. But one has to question the effectiveness and extent of stimulus because of the scale of China’s consumer debts. Complacent assumptions of stimulus entirely compensating for growth lost during the virus seem wide of the mark.

The effects on global polypropylene demand

This, I am afraid, could be a major turning point for the global economy. There is no point in me sugaring the pill as I would be doing my readers a major disservice. Two out of the three scenarios – which I detailed on Friday – of when the virus could be brought under control would, in my view, lead to a global recession.

As a reminder here are the scenarios in detail again:

I now think Scenario One is unlikely and so the best we can hope for is Scenario Two.

On Friday, I estimated that Chinese polypropylene (PP) demand could under Scenario Two be 2.9m tonnes or 9.6% lower in 2020 than my original pre-virus base case. Now let’s extend this globally and think of three different outcomes, built around different transmission effects of weaker Chinese growth on the rest of the world:

I therefore advise to err on the side of caution when your company gets together to conduct your re-forecasting.