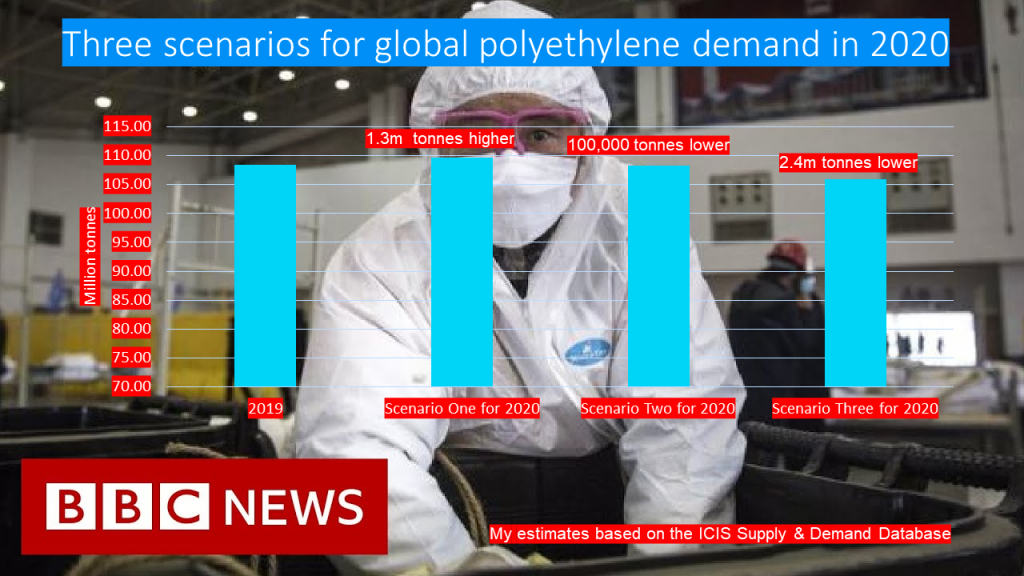 I AM a bit confused this morning following some excitement about the Chinese decision to allow polyethylene (PE) importers to apply for exemptions from the 25% additional tariffs on US high-density (HDPE) and linear-low density PE (LLDPE) that have been in place since August 2018. One of my contacts for instance sent me this message, via What’s App, last night: “This will lead to a huge surge in US PE exports to China and will relieve most of the  pressures on the market.”

This is wishful thinking, I am afraid. The fall in consumption which will result from coronavirus or COVID-19 outbreak will cancel out any beneficial effects from the removal of the duties.

I now see a global recession as almost inevitable. This raises the question about PE and other petrochemicals demand not only in 2020 but also in 2021 as well. How deep and long lasting will the recession be?

“Buying on the dip” will no longer work

The big challenge we face is the excessive leverage and risk built up across the global economy since the Global Financial Crisis. It has been like this for many years: You walk into the casino and the people who run the casino (the central bankers) offer you almost free chips. This has encouraged the highly speculative investors to gamble more and more.

In the case of the pension funds, they have been forced to gamble, to chase yields in the financial and corporate debt markets, because returns for pensioners that would have been way short of adequate if money had been left in the bank. Leaving money in the bank hasn’t been an option because of record-low interest rates.

Every macroeconomic event that has threatened to upset the apple cart has been treated by investors as an opportunity to “buy on the dip”, in the knowledge that the central bankers would respond with yet more corrective stimulus.

But this time is different. Jay Powell, the Fed chairman, cannot convert the printing presses from printing banknotes to producing components for automobiles or I-Phones. The gumming-up of global supply chains  which has resulted from Covid-19 cannot be rectified by more financial stimulus.

Now let’s think of the role of China since 2008. The domestic stimulus it has pumped into its economy since the last financial crisis has been more than the stimulus of the Fed, the Bank of England, the European Central Bank and the Bank of Japan put together.

The Chinese stimulus was firstly, up until around 2012, in the form of very easy lending that encouraged major investment in new manufacturing capacity, including in petrochemicals such as purified terephthalic acid, propylene and phenol. Not many questions were asked about the long-term supply and demand fundamentals, as the focus was instead on the economic multiplier effect of building the factories.

Next came an explosion of consumer debt to the point where one-third of young Chinese people in a survey conducted in 2018 were borrowing more money to service existing debt.  The real-estate boom – also of course a result of economic stimulus – has resulted in young couples being forced to ask their grandparents and parents to contribute towards the cost of a home.

In late 2017, Xi Jinping recognised the problem of excessive leverage. Thanks to his consolidation of his power, he was able to cut back on new credit from January the following year. This reduced some of the global growth momentum, along with the trade war. But China’s economic slowdown was being managed reasonably well up until the outbreak of the virus.

Now, though, as this article in Business Insider argues: Because of the coronavirus, the weakened banking system – less than one year out from being on a bit of a brink – will now have to forgive loans for companies large and small and continue financing local governments dealing with the fallout from stagnating economies and the effort to fight the coronavirus.

S&P research estimates that if this crisis is prolonged, bad debt in the banking system could increase from 2% at the end of last year to over 6%.

There has been a lot of talk of further huge Chinese economic stimulus to compensate for the impact of the virus. But given the extent of bad debts and the strains on the banking system, the scale of stimulus is likely to be a lot less than many people expect. And whatever stimulus does take place, think of the law of diminishing returns -a reluctance to spend money by the vitally important Chinese consumer because of their existing debt positions.

Mr Powell et al, as I said, cannot print spare parts for automobiles or components of the Apple I-Phone as global manufacturers struggle to obtain supplies. Apple has already cut billions of dollars off its 2020 sales forecasts and UK car factories are warning that they are running out of parts.

What is making the problem worse for global manufacturers is that they are often heavily reliant on sometimes just one components supplier, with the supplier usually China. “Just in time” or lean inventory management means that manufacturers have very little stock in hand to deal with events like this.

China is also no longer just a provider of basic components and cheap assembly. Because it has successfully moved up the manufacturing value chain, it is now very often supplying the higher-value components that are difficult, if not impossible, to source from elsewhere.

Neither can the central bankers magically make Chinese consumers, so vital to global demand, quickly regain their confidence once the virus has been contained.

Think also of the second and third-order effects of a collapse in iron ore, coal and natural gas exports from Australia to China, of global travel everywhere and of global events being postponed and cancelled as people avoid crowded places. Think of Thailand where 10% of its GDP is generated by tourism with 38% of its tourists coming from China.

You really want to still buy on the dip in financial markets? The more likely response, as the full extent of this crisis is understood, is that financial markets will retreat and follow the manufacturing sector down. Then we will have a recession.

Coronavirus has exposed these long-standing fault lines in the global economy. A catalyst was bound to come along at some point. The only questions were the nature of the catalyst and its timing.

Following the same approach as with polypropylene on Monday, let’s think through three different scenarios for global PE growth, based on lower-than-expected Chinese demand growth in 2020. Earlier this month, I had guesstimated that, because of coronavirus, Chinese consumption of PE could be around 3m tonnes lower in 2020 than my earlier forecast – at some 33m tonnes rather than 36m tonnes. This would be 8.6% below my earlier expectation.

Here are my three scenarios, based on different transmission effects from a slower China on the rest of the world:

Is my third scenario way too pessimistic? Not necessarily when you consider that as recently as 2008, before China’s huge economic stimulus, its PE demand was just 11.9m tonnes – 15% of the global total. By last year, its consumption had climbed to 34m tonnes or 32% of global demand. The same types of increases apply across all raw materials and manufactured goods.

You would therefore be prudent to stress test your business under Scenario 3 whilst hoping for something better.