Home Blogs Asian Chemical Connections China slowdown may be the biggest petchem event in H1, not US and European tight supply 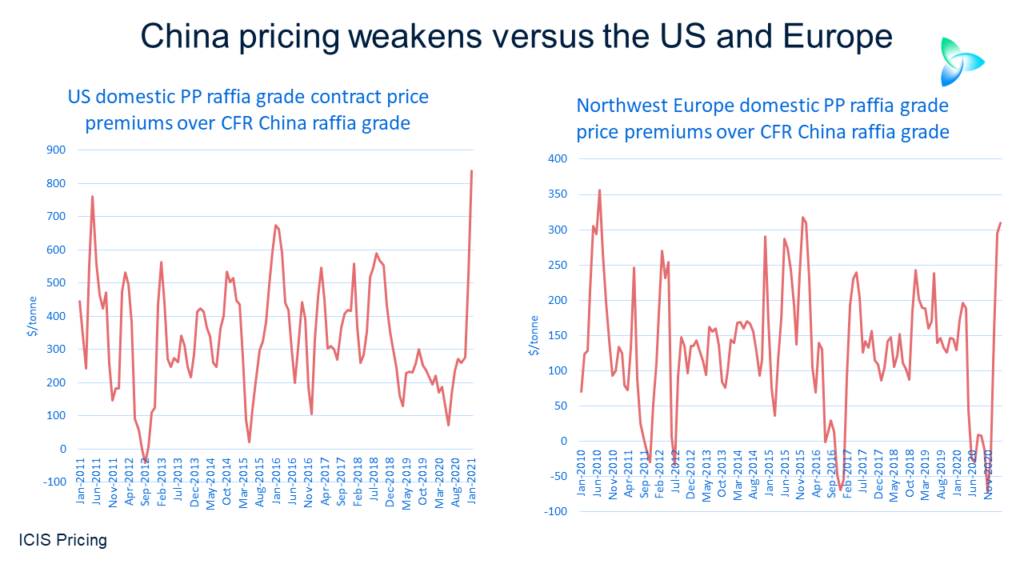 I SUSPECT that the bigger story for the global petrochemicals industry in H1 may not turn out to be the extraordinary production shortages in the US and Europe that are being so well detailed by the ICIS pricing and analytics teams.

“Eh, what on earth are you talking about?” you may well ask, given the scale of what is happening in the US and Europe.

A staggering 84% of US polypropylene (PP) capacity was, for example, either shut down or running at sub-optimal rates as of 18 February, according to this ICIS news article.

This ICIS infographic gives you the latest on all the petrochemical shutdowns in the US resulting from power outages caused by extreme cold weather. As of yesterday, no less than 15.6% of US petrochemicals capacity was offline.

A great podcast from my ICIS colleagues Linda Naylor and Nel Weddle details the state of play in European olefins and polyolefins markets.

European propylene has long been tight because of the cutbacks in refinery operating rates, the result of pandemic-related declines in demand for transportation fuels.

Both the propylene and ethylene value chains in Europe may tighten further during this year’s cracker turnaround season. Several turnarounds were delayed from last year until 2021 because of the pandemic.

The tight supply in the US and Europe is occurring against a background of very strong demand – again down to the pandemic as I have been discussing since last August.

Packaging, hygiene and personal-protective equipment end-use markets are booming, as is the demand for the petrochemicals and polymers that go into consumer electronics and white goods.

We must bear in mind, though, that it could well be China which delivers a bigger shock to the petrochemicals system during the first half of this year.

But because we lack all the necessary data on China, it is much harder to conclude that Chinese markets are long as opposed to the self-evident tightness in US and European markets.

This is like a giant jigsaw puzzle, where, although some key pieces are missing, it is still possible to get an idea of the overall picture in China.

We do not have data on real inventories, nor we do know the true extent of China’s second wave of the pandemic and how this will affect demand during the key Lunar New Year (LNY) holiday spending season.

But the pieces of the puzzle that we do have include a mystery over global oil inventories that needs further investigation.  More tangibly, we have Chinese petrochemical production and net import data for 2020 that point to overstocking in the context of the events of January-February this year.

We also know that the main driver of China’s 2020 recovery from the pandemic was its exports of finished goods which met the needs of our coronavirus lifestyles.

As China’s share of global export markets soared (and this no exaggeration, based on the data), the real year-on-year decline in domestic retail sales was probably more like 4.8% rather than the official 3.9%.

So, the local economy remains significantly smaller than before the pandemic.

We must next consider the two events that point towards potential overstocking in Chinese petrochemicals: the global container and semiconductor shortages.

Some experts are maintaining that the semiconductor shortage will last for six months; others are now suggesting that it could persist throughout 2021.

Right now, the chip shortage is only affecting the autos markets which accounts for 10% of global chips demand. But Samsung has warned that smartphone production may also be affected.

But we also know, from the evidence of history, that if Chinese economic growth were to take a dive in Q1 2021 versus the fourth quarter of last year, Beijing would probably provide more economic stimulus.

This year marks the 100th anniversary of the founding of the Chinese Communist Party. It therefore seems fair to assume that any new stimulus programme would be big because of the political significance of the anniversary.

Still, though, because exports were so critical to the 2020 Chinese recovery, the bigger issue for Chinese petrochemical growth at least in H1 – and perhaps for the full year – might well be how quickly container and semiconductor shortages are resolved.

More immediately, there are sets of data relating to China and the rest of the world that demonstrate the divergence now taking place in global petrochemicals markets. This is our pricing data.

The above slide only uses polypropylene (PP) raffia grade as examples, but it is a similar story across many other petrochemicals and polymers.

As you can see, US PP raffia grade contract prices – and this was only up until the end of January – had reached a record premium over CFR China raffia-grade prices.

This is from when our US contract assessments began in January 2011. It seems likely that the premiums will have risen even more since then, as January predated the US power outages.

In Europe versus China, the above chart goes back to January 2010. European PP raffia grade contract premiums started climbing over CFR China raffia-grade prices in January this year.

During the week ending 12 February, the premium reached $310/tonne, the second highest since January 2015.

And remember this: Chinese demand in volume terms across all the petrochemicals overtook the US and Europe in 2008-2009.

Since then, the gap has widened. China is by far the biggest market in the world – and, in some products, completely dominates global import markets.

What happens in Chinese markets has major global implications.

Now let us examine potential missing barrels of oil that might be in storage in China. Let us also look at the Chinese 2020 apparent demand data for PP and styrene monomer (SM) as it might imply substantial overstocking. 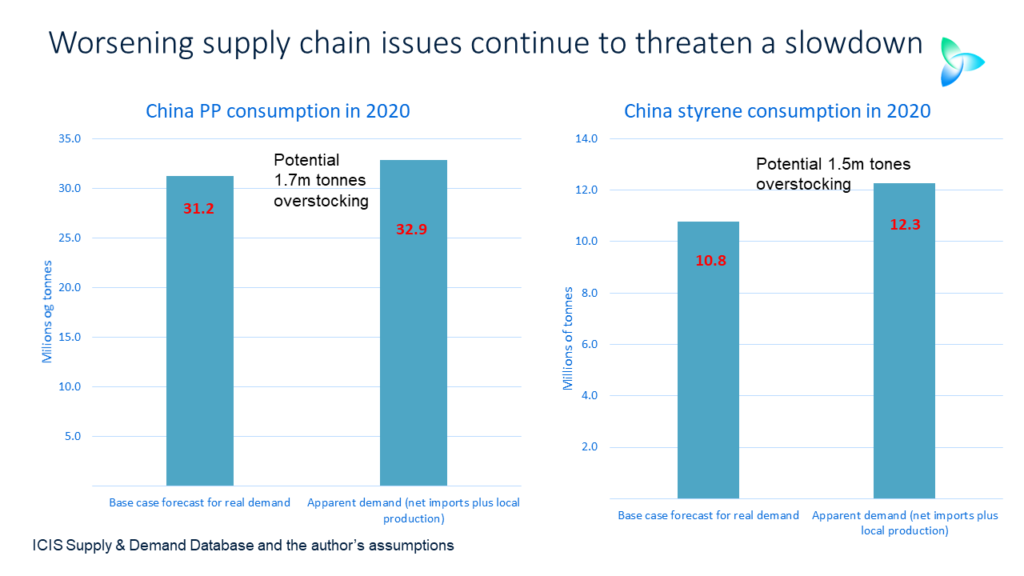 If you recall, China’s crude imports surged last year as it built up stocks when prices were very cheap.  Competitively priced crude was then used to provide advantaged raw materials to make petrochemicals, according to my discussions with the market.

These cost advantages were then fed downstream to finished-goods manufacturers as the manufacturers were further supported by export tax rebates, I have also been told. This apparently helped China make big gains in export markets.

But this Wall Street Journal article reports that the gap between global observed and implied crude inventory levels was at its highest-ever level last year.

The newspaper was quoting an Oxford Institute of Energy Studies research paper by Bassam Fattouh, Andreas Economou and Michal Meidan. The paper found that the gap was almost 10 times as large as the imbalance seen in the second half of 2008, during the Global Financial Crisis.

One explanation for the gap between stocks observed by research bodies such as the International Energy Administration is a data-gathering breakdown during the pandemic.

Another comforting explanation is that there are often time lags between marrying stock levels with demand.

Or there are substantial crude stocks somewhere, likely with non-Organisation for Economic Development and Co-operation countries including China.

We simply don’t know and must not press a big alarm bell without further research. But this is clearly an issue to be aware of as we consider the implications of a potential Chinese economic slowdown in Q1, driven, as I said, by the global container and semiconductor shortages.

What does seem clearer, however, is our 2020 data on Chinese petrochemicals data across many products.

If you had asked me as recently as a month ago what these numbers meant, I would have said that they indicate Chinese real growth in 2020 was set to be well ahead of our forecasts.

But the facts on the ground have changed. Because of the worsening of the container and semiconductor shortages, it seems as if we now might have substantial overstocking in 2020 that has been carried forward into 2021:

The stories are similar in polyethylene, paraxylene and ethylene glycols of 2020. Apparent demand was well ahead of our estimate for real demand.

Let me stress that the jury has yet to return over whether we will see a big slowdown in China. We should know a little more when China’s cumulative export data for January and February 2021 are released. Since last year, China has only been releasing data for both January and February as one set of numbers.

Here is another thing as well: petrochemicals exports that would have headed to China are probably heading to Latin America, because the US cannot supply Latin America, and to the tight markets in Europe. This should help reduce any Chinese overstocking.

Without doubt, though, we need deeper and deeper analysis of China if we are to shine an effective light on the real direction of global petrochemicals markets. Watch this space.