TODAY I get closer to completing my outlooks for China’s petrochemical and polymer imports in 2021 by analysing what might happen in polypropylene (PP). Later this week or next week I will complete the picture by looking at styrene monomer.

It is very different story in paraxylene (PX) where 2021 imports might fall by as much as 58% over last year. Ethylene glycols (EG) imports may end up being 45% lower. I have long been forecasting a collapse in PX imports. But until last week I hadn’t anticipated a big fall in EG imports. Our latest data on EG show very aggressive expansion of Chinese capacity.

For the above products, I have provided overall estimates of declines in imports under two different operating-rate scenarios – and what each of the scenarios would mean for Chinese imports from its top ten trading partners. This was based on the trading partners winning the same market shares of total Chinese imports in 2021 and they did last year. I use the same approach for PP below. 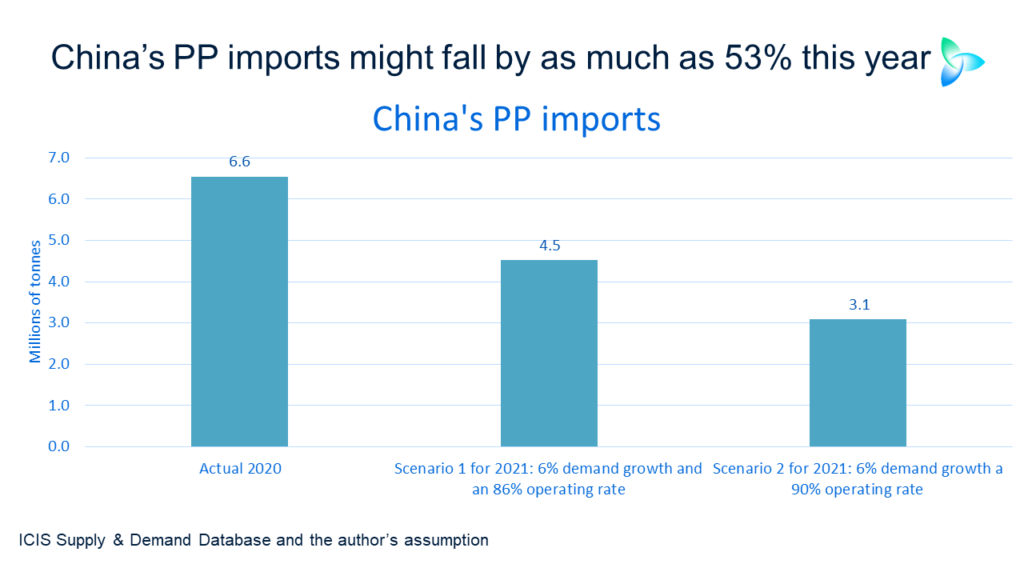 As with PX and EG, the collapse in in PP imports has been a long time coming. We can trace the routes of   declines in petrochemical imports to 2014, when Beijing decided to push more aggressively towards self-sufficiency. There are two reasons for this push:

Illustrating this wider range of propylene production roots, China had no PDH-based propylene capacity as recently as 2012.

But last year, 20% of China’s total propylene capacity was via PDH. What has supported this route is the fall in international propane prices resulting from the US shale gas revolution. Several of China’s PDH plants are based on imported propane. In 2020, just 30% of propylene capacity was via steam cracking versus 77% for ethylene. Steam crackers are expensive machines.

Whilst the percentage of total propylene derived from refineries has fallen over the years, China continues to add lots of new refinery capacity. As all China’s new refineries obviously include fluid catalytic cracking, adding on propylene extraction and processing investments often make sense.

Please do not assume that even though total PP imports might collapse, China will continue to import higher-value grades of PP.

This would of course not fit with Objective 1 detailed above. China isn’t going to add sufficient value to manufacturing in general if it shirks from the challenges of closing technology gaps in products such as copolymer grades of PP.

“China doesn’t have the catalysts and reactors to make sophisticated grades of copolymer,” a contact said to me last year.

This might well be so, but I don’t believe it will be the case in future because of the existential need to raise the value of manufacturing. I see it as perfectly possible that China will be completely self-sufficient in most grades of PP in three years’ time.

Now let me detail my two scenarios for total PP imports in 2021 versus what happened last year.

Last year was an awesome year for importers. This was despite an 11% increase in local capacity and a 9% rise in domestic production. Imports were still up by an eye-wateringly high 26% in 2020 over the previous year to 6.6m tonnes, even though 2019 was also a strong year for import growth.

What was behind this quite stunning performance was the “China in and China out” story – big demand for petrochemicals imports in general that were re-exported as components of finished goods and packaging for finished goods. China enjoyed an export boom because of its ability to provide the goods we need for our pandemic lifestyles.

If you add net imports (slightly higher than imports at 27% year-on-year growth) to the rise in local production, you end up with 2020 apparent demand growth of 13%. This left last year’s apparent demand at 32.9m tonnes – 1.7m tonnes more than our estimate for real demand during the year (real demand is consumption adjusted for any inventory distortions).

But this year, I suspect that the global container freight and semiconductor shortages will result in an economic slowdown in China during at least Q1, and possibly for the full first half of year. It had been hoped that the container-freight shortages would be resolved by the end of Q1, but experts are now warning that it might not be resolved.

A further factor behind the slowdown could be travel restrictions during the Lunar New Year holidays, the result of a limited second outbreak of the pandemic in China. The holidays are major domestic spending season.

The semiconductor shortage has caused the closure of overseas auto plants. Autos are an important end-use market for copolymer grades of PP. The chip shortage is expected to last for six or even 12 months.

China will surely launch a new economic stimulus package if the economy slows down. What might make any new package very big is this that 2020 is politically sensitivity, as it marks the 100th anniversary of the founding of the Chinese Communist Party.

But China’s remarkably strong economic performance in 2020 was mainly down to booming exports. It is hard to see how domestic growth could fully compensate for a decline export growth.

I have for these reasons revised down my estimate for China’s 2021 PP consumption growth. Two weeks ago, I had expected 7%. This would have still been a big decline from the stellar heights of last year as export growth moderated.

Now I think that growth could be more in the region of 6%. Assuming 6% growth and a local PP operating rate of 86% – the same as in 2020 – this year’s imports (see Scenario 1 in the above chart) would fall to 4.5m tonnes compared with last year’s 6.6m tonnes. Local capacity is forecast to increase by a further 15% in 2021.

But the thing is that China’s average PP operating rate between 1999 and 2019 was 90%. What people keep getting wrong is the assumption that China will reduce capacity utilisation when demand growth weakens.

There is little historic evidence to support this because increasing self-sufficiency is a political and strategic imperative viewed as more important than the economics of individual plants. Just about all of China’s new PP capacity is also world-scale and is located in modern industry parks. In other words, the new capacity is highly efficient. 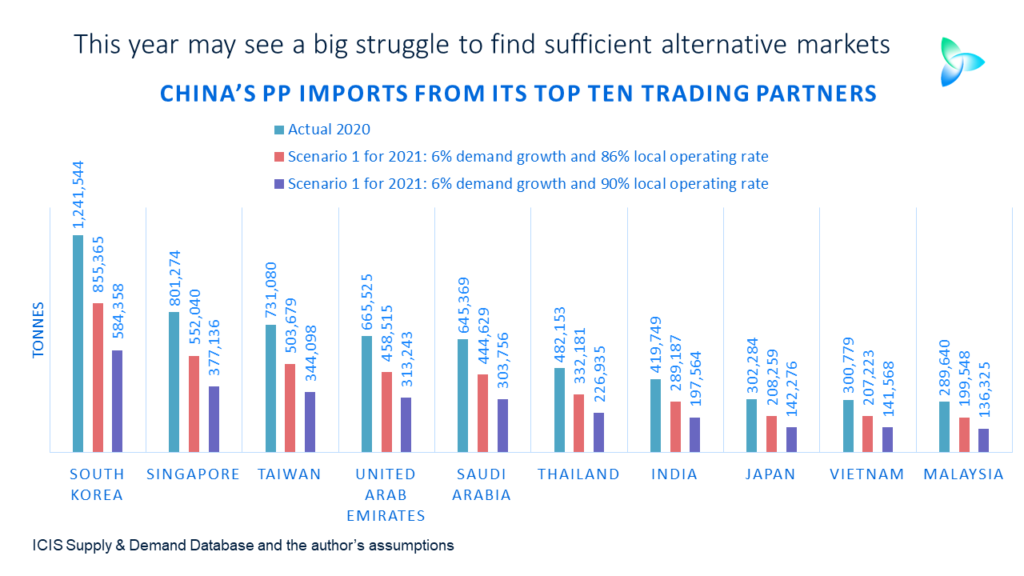 Now let us examine the chart immediately above. As usual, I have expressed imports from China’s top ten trading partners in tonnes to make the chart easier to read in detail. In the text, I am using millions of tonnes as well as actual tonnes.

The good news could be very tight US and European PP markets during the first few months of this year, possibly longer.

Tight supply is the result of extreme cold weather in the US leading to major power cuts. Last week, no less than 84% of US PP capacity was either shut down or running at reduced rates because of the outages. Both US and European PP supply has also been curtailed by reduced availability of propylene from refineries. Refinery run rates have been cut because of the pandemic-related fall in demand for transportation fuels.

Here is another thing, though: in 2020, we estimate that China accounted for 43% of total global net PP imports among the countries and regions that imported more than they exported. Over the long term, therefore, take China largely out of the import picture and exporters to China will struggle to find sufficient alternative destinations.

Struggle is too weak a word for PX and EG. In 2020, China drove 90% of global net imports. The percentage for EG was 87%. Without China there would be virtually no PX and EG import markets left.

Major exporters to China, other than in PE, are therefore in urgent need of a new business model. I shall continue to explore what this model will look like on this blog.

PREVIOUS POST China slowdown may be the biggest petchem event in H1, not US and European tight supply
NEXT POST China PX imports could fall by 64% in 2021 with styrene imports 59% lower