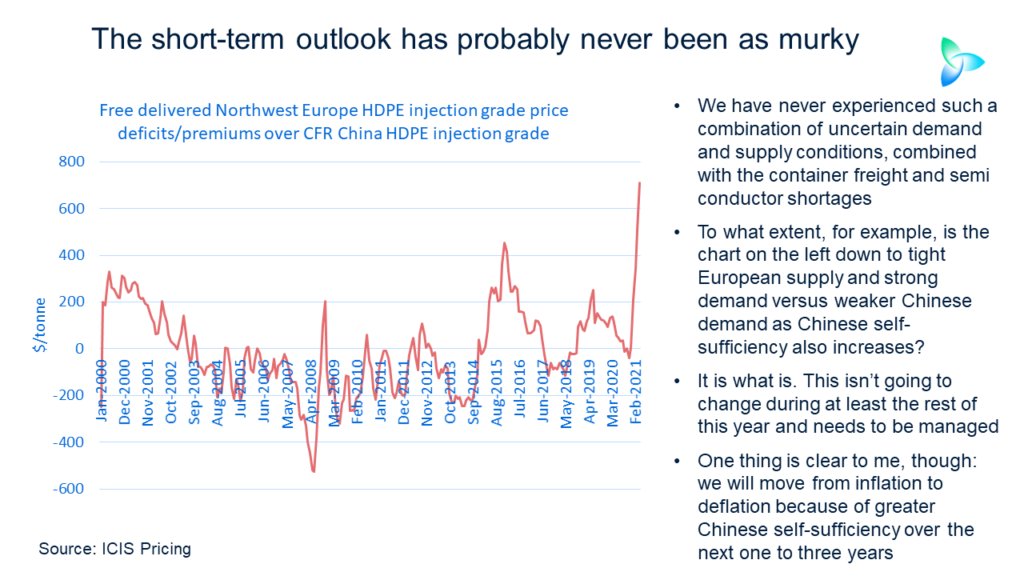 OFFERING clear guidance to petrochemicals investors and other stakeholders remains incredibly difficult in this environment. What happens next has probably never been as uncertain, making it difficult for producers to provide concrete projections for the rest of 2021 following an excellent Q1.

At the heart of the problem remains whether demand in end-use sectors that rebound once the pandemic has been brought fully under control will be greater, the same as or less than the other end-use sectors where consumption seems likely to decline.

Focusing only on developed markets, think of the of potential extra auto sales as people emerge from lockdowns.

Consider, also, greater packaging demand that may result from a higher number of internal European flights later this year, even if long-haul travel remains off the cards. Europeans are hoping to return to the region’s southern beaches.

To what extent might this extra demand be cancelled out by declines in consumption of all the things we bought during lockdowns? There could be lower demand for washing machines, TVs, refrigerators and consumer electronics as we spend less time at home.

Will extra packaging demand linked to flying be more, the same as, or less than the demand lost because we are buying less internet-ordered takeaway food? It might well be difficult to fully replace lost plastics consumption in takeaway food given the large volumes of wrapping required in any online delivery.

If millions of Europeans can visit Spanish and Greek beaches this summer and winter, they obviously wouldn’t be buying takeaway dinners. When they get back home, they could spend a lot more in restaurants.

But China serves as an interesting case study about what could happen next in Europe. In 2015, when the Chinese economy suffered a brief downturn, high-end restaurant dining collapsed and was replaced by rapid growth in takeaway food-delivery options.

This led the creation of super-convenient infrastructure by Alibaba and other online food-delivery services.

Ordering restaurant food over the internet remained incredibly popular in China when the economy recovered from 2016 onwards, even as restaurant spending bounced back.

We could be seeing the same pattern in the developed world with $14bn of investor money flowing into start-ups that are delivering not just restaurant food, but also groceries and even snacks. Convenience may lead to a permanent shift in lifestyles.

Where I think there is clarity is in hygiene end-use markets. As we hopefully continue to emerge from the pandemic, I can see no reason why hygiene-related demand wouldn’t remain very strong because of the precautionary principle.

What about inflation, though?

Another argument is that because of all the government stimulus flowing through developed-world economies, this tide of stimulus will lift all boats.

Demand for everything, including durable goods, might boom as we enter another “Roaring 20s” of very high consumer demand. The Roaring 20s came after the Spanish Flu pandemic.

The big grey area remains the extent to which the global supply-chain disruptions are feeding through into producer -and consumer-price inflation.

The container-freight shortage has driven container freight rates to all-time highs. Automobile and consumer electronics production has been adversely affected by the semiconductor shortage.

What could make the supply-chain crisis even worse is a “Roaring 20s” surge in demand, leading to further inflation that crimps demand.

And/or a lack of availability of the extra autos, computers, pushbikes and giant flat-screen TVs that we’d like to buy prevents another Roaring 20s consumer boom.

And now we must consider the coronavirus crisis in India. What matters most of all, of course, is how the world responds in supporting India through this crisis through supplying personal protective equipment, oxygen and vaccines and vaccine raw ingredients.

But from the narrow focus of developed-world petrochemicals demand, there is a clear risk that the dangerous new strains of the pandemic spread elsewhere.

Is the terribly high numbers of new cases and deaths in India mainly the result of new and more infectious variants the pandemic?  Or are existing strains the main problem?

If the former is the case, there is a significant risk that when cases of the new strains appear in other countries, controlling their spread will be difficult using existing versions of the vaccines.

And then there is China 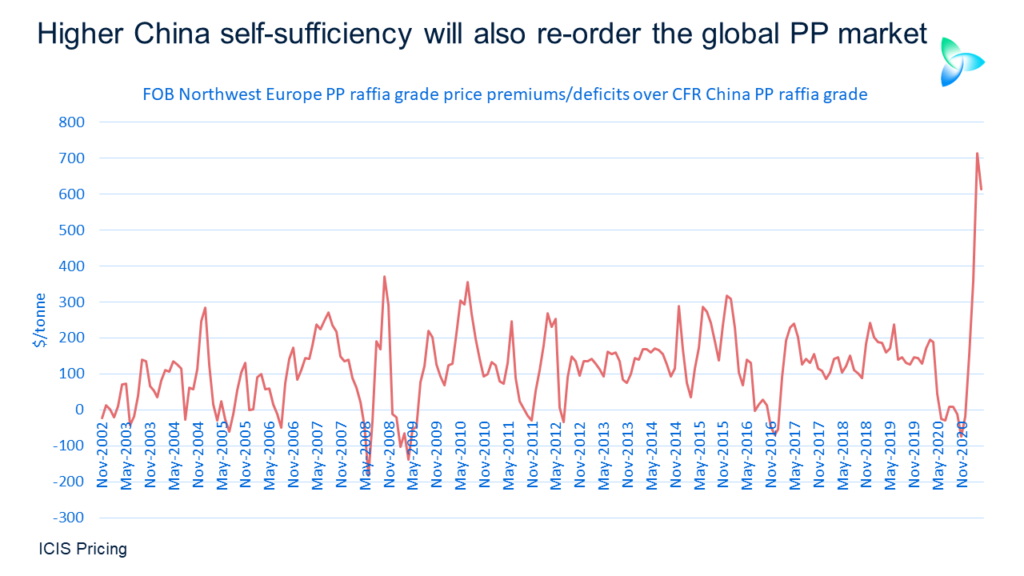 Another big unknown remains the extent to which the chart at the beginning of this blog post – and the one immediately above – is the result of the tightness in European markets and strong European demand versus a slightly weaker Chinese economy and rising Chinese petrochemicals self-sufficiency.

Both charts show that since the price quotes began, NWE premiums have never been as big over China as has been the case over the last month.

Supporting the notion that this is down to events in Europe is long-standing reduced PE and PP feedstock supply from refineries because of refinery rates cuts resulting from the collapse of demand for transportation fuels.

European cracker turnarounds that should have taken place last year have been delayed to Q2 2021 because of the pandemic. European PE and PP demand has been supported by the pandemic, for the reasons described above.

A contact said to me last week that “arbitrage to Europe has become almost theoretical”. Containers are either too expensive to move PE and PP to Europe or they are not available, he added.

There is nothing we can do about the lack of visibility over the short term, I am afraid. We need to build much better downstream-focused demand models. But this will take a long time.

One thing is clear to me through all this muddle, however: at some point over the next one to three years there will be a major shock to the global petrochemicals industry as China moves much closer to self-sufficiency.

Not all producers will be evenly affected, of course. Those most exposed will be the big Middle East, northeast Asian, southeast Asian and US exporters to China.

But I believe that everyone, everywhere, in the value chains affected – PP, PE, styrene monomer, ethylene glycols, paraxylene and methanol – will be affected China-driven price deflation. This will be a big change from today’s inflation.