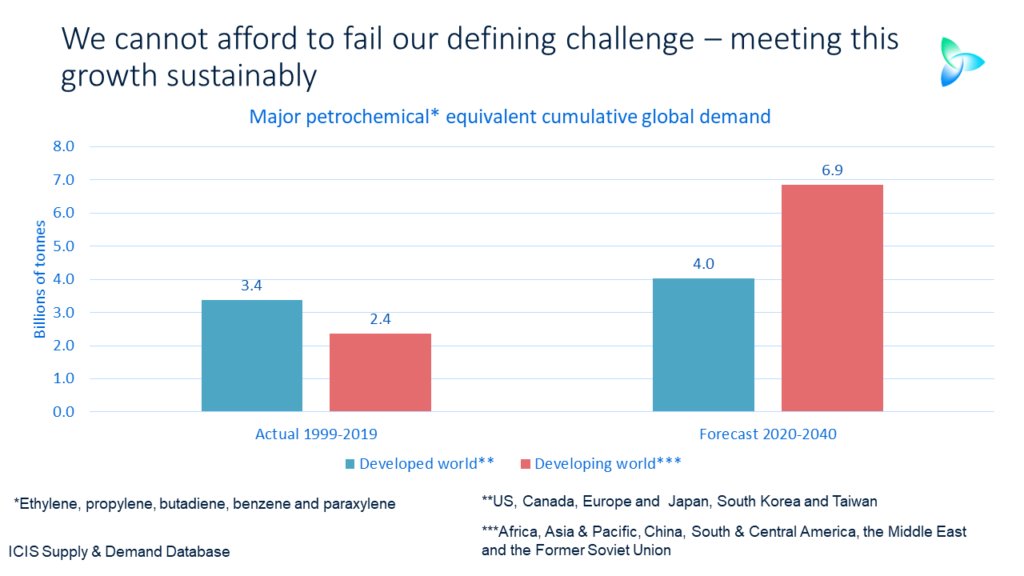 NO one-size-fits-all technological solution to the climate change and plastic waste crises is likely to work. What we will instead  very probably see is a patchwork of solutions across regions and countries.

This will be combined with what I believe must be common global regulatory approaches that everyone adheres to.

I cannot see how a silver bullet can emerge – one globally dominant technology or even a group of technologies. Limiting factors include geography, complex and diverse systems of governance in developing regions such as Asia and lack of money.

On this latter point, even if 100%-proven technologies emerge that can solve both these crises together (and they must be solved together) and globally, people don’t run businesses as charities. How will poorer countries afford breakthrough technology licensing and capital costs?

At the heart of our challenge is the need for growth in the developing world where hundreds of millions of people who are today in extreme or relative poverty are perfectly entitled – in fact, I would say have the basic human right – to the goods and services we richer people take for granted.

And at the heart of the dilemma for the petrochemicals industry is outlined in above chart, compiled from the ICIS Supply & Demand Database:

Oil, gas and petrochemicals companies are increasingly being forced to “walk the talk” on greening their businesses by environmentally conscious investors.

At the same time, though, they remain under pressure to continue to grow capacities. The petrochemicals business has always been about “running harder to stand still”- of building ever-bigger plants to at least maintain and ideally grow market share.

How do companies grow capacities and volumes in sustainable ways that also take maximum advantage of growth in the developing world?

Western companies in particular run the risk that if they go a long way down the green path, competitors facing lower environmental pressures might be able to add more capacities with better cost-per-tonne economics. These competitors could end up winning the market share battle.

There may then be a different set of investors, or even the same investors, who penalise green companies for not growing enough.

The “less is more” school of thought argues that we simply need to consume much less in order to tackle our environmental crises. This is logical when it comes to, say, excessive use of plastics in packaging for aesthetic rather than functional reasons.

But while our absolute numbers in the above chart might obviously be wrong as these are only forecasts, all of us should want the trend line to be the same – developing world demand exceeding the developed world in 2020-2040.

If the trend line is correct, it will mean that hundreds of millions more people will be lifted out of extreme and relative poverty.

This goes much beyond just the frippery of a flat-screen TV even bigger than your neighbour’s or a shiny new motor scooter that can out-accelerate anyone else on your block or street.

The goods and services produced by our industry support human health, increase crop yields and ensure that less food goes to waste before it can be consumed, among many other societal benefits.

Anyone who has travelled through poorer parts of Asia, as I have, will have seen for themselves the impact on lives made by the lack of access to sufficient potable water, food, shelter and decent infrastructure.

But anyone who has also travelled through Asia will have also seen mountains of plastic waste in the open environment. And it is poorer countries that are likely to suffer the most from climate change because many are equatorial.

There is a cacophony out there as all the different players make as much noise as possible in an attempt to draw attention to themselves.

We need to filter out the distracting noise and only listen to what makes sense. But this is made incredibly difficult by an absence of sophisticated-enough life cycle analysis (LCA) that considers all the variables. LCA is very much an emerging science.

One thing is certain, however, in all this noise, complexity and ambiguity: we simply must find solutions because the alternatives are almost too frightening to contemplate. Until we can find another habitable planet, we are stuck with the one we have and must make sure it continues to be habitable.

I have covered such a wide range of themes that it would be impossible to cover each theme in detail in a single blog post.

So, I will break this down into an occasional series of posts over the coming weeks and months, starting next week, when I will discuss my views on the global approach that we need to establish for plastic waste.

As I said at the beginning, while technological solutions are likely to be country- and region-specific, we need global regulatory standards. There should be something akin to the Paris Agreement for the global plastic waste challenge.

In another post, I will revisit the theme of the benefits of chemicals and mechanical recycling versus conventional petrochemicals production.

And I will cover other themes over the next few weeks and months in a series I hope will contribute to this important debate.

This is a defining challenge for our industry. We must get this right.