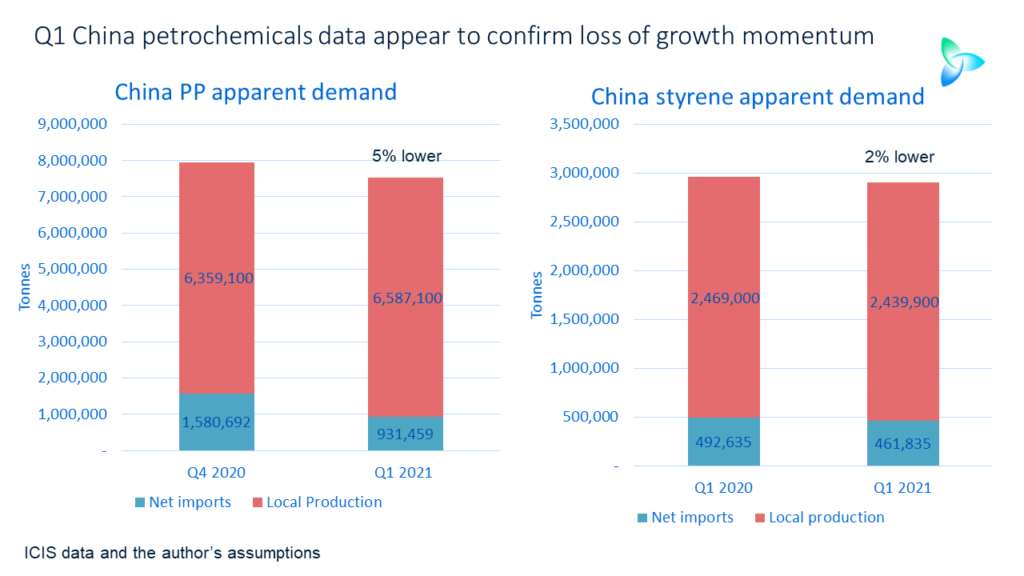 WE MUST BE careful here. If 2020 taught is anything, it is that China has the capability of stunning everybody with the speed of its economic growth, even against a backdrop of a much slower global economy.

Few people imagined, including myself, that in the dark days of March last year, China would end up with positive 2.3% GDP growth for the full year.

But what last year also demonstrates is the need for a scenario-based approach. If you were a petrochemicals exporter to China and you had only one scenario in March last year for the rest of 2020, one of doom and gloom, your production and sales targets would have been very wrong.

You would have left money on the table by not anticipating a rebound in Chinese petrochemicals pricing and import volumes.

Now there is a scenario is that because of the global supply-chain crisis limiting Chinese exports of finished goods, and because of local deleveraging, the Chinese economy has come off the boil.

As I’ve been stressing since January, I see at is as absolutely critical that you completely ignore all year-on-year Q1 2021 data comparisons as you build your downside production and targets for the rest of this year.

What is instead relevant is comparing Q1 this year with Q4 2021, when the economy was booming on surging exports of finished goods.

What we need to decide is whether this strong momentum has been fully carried over into this year and the evidence suggests otherwise. Here is some evidence to the contrary:

Petrochemicals demand data is a good proxy for the overall economic condition of any economy.

It is useful to focus on these two products as their imports and local production are heavily tied into exports of finished goods Some 20-30% of PP and SM imports are said to be re-exported as personal protective equipment, washing machines, refrigerators and consumer electronics etc.

Now let us dig a bit deeper into the data in an attempt to find out what the numbers might be telling us about the rest of this year.

In March this year, China’s PP exports surged to 257,178 tonnes. This was by far the largest monthly total for exports in any month as far back as our ICIS Supply & Demand trade data goes. March exports were 468% higher than in February.

Quite obviously, therefore, these extraordinary March export numbers played a role in the 41% decline in quarter-on-quarter Q1 net imports – and thus apparent demand.

The rise in exports is the result of much better netbacks in countries and regions other than China because of the global-supply chain crisis – the shortages of container freight space and semiconductors.

This resulted traders and local producers taking advantage of the better netbacks, leading to the surge in exports – and also lower imports. Imports as opposed to net imports (imports minus exports) were at 1.3m tonnes in Q1 this year – 31% lower than in Q4 2020.

Another explanation for the gulf in netbacks is much tighter supply in regions such as Europe than in China.

European supply is tight because of stronger-than-expected demand and reductions in the availability of feedstock from refineries because of the pandemic, whereas Chinese capacity is due to increase by 15% this year to 37.8m tonnes/year.

But China’s PP production was down by 1% in Q1. And if China’s growth momentum had fully carried over into Q1 this year from the fourth quarter of 2020, wouldn’t pricing in China have been lot higher?

I am still thinking through the implications for what the Q1 2021 data mean PP and SM imports for the full year. But I am sure they will be significantly lower than in 2020 because of rising self-sufficiency.

As I said at the beginning, all these numbers must be taken with a large pinch of salt. But what this post demonstrate is the huge value of ICIS data in helping you track the world’s most important petrochemicals market.