NORTHEAST ASIAN (NEA) polypropylene (PP) producers are finding it increasingly difficult to export cargoes outside their region because of ample supply elsewhere and buyers’ reluctance to accept long delivery times.

Freight costs have also spiked over the recent weeks, but container freight costs still seem workable on some routes. But when you add in ample supply  in some countries and buyer resistance even where freight costs are workable, shipments are proving more difficult.

Using China as an example, we can see this from the camel hump-shaped chart below on the left, showing total month-on-month exports in 2021. The chart on the right shows the three destinations for Chinese exports that saw the biggest declines in June and July versus April and May. 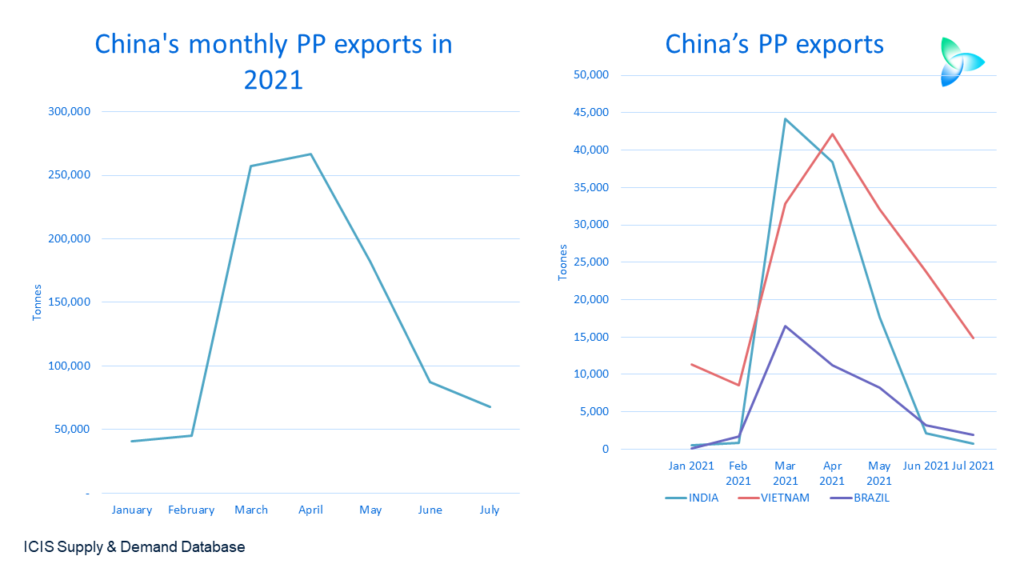 In India, paying high prices doesn’t appear to be an issue because of a demand recovery now that the latest wave of the pandemic has passed its peak. Bigger barriers are delivery times from China that have risen from the usual 20-25 days to as much as two months. Supply from the Middle East is also ample.

There is also a risk that both NEA and southeast Asian (SEA) producers will struggle to maintain exports at recent higher levels to the US because of again not just higher freight rates, but also long delivery lead times.

PP supply is very tight in the US because of resilient demand, the lingering impact of the Texas February winter storms, reduced availably of propylene because of pandemic-related reduced demand for transportation – and, most recently, Hurricane Ida.

The hurricane that ripped through Louisiana has only led to reports of the closure of one PP plant – the 460,000 tonne/year Pinnacle Polymers facility in Garyville, Louisiana.

But seven refineries remained shut as of 1 September, making up about 9% of total US operable capacity. This will of course reduce propylene supply and could affect PP production.

It will be several weeks before refining and petrochemicals production returns to normal in Louisiana.

But in the third week of August, Freightos, the online freight marketplace, said: “US ports are overwhelmed by peak season imports. The ports of LA/Long Beach now have more than 30 ships waiting in the bay, approaching the record set at the start of the year.”

Delays at Long Beach are said to have worsened since then, as this is the peak season for China’s exports of finished goods to the US and other developed markets, in time for Christmas. 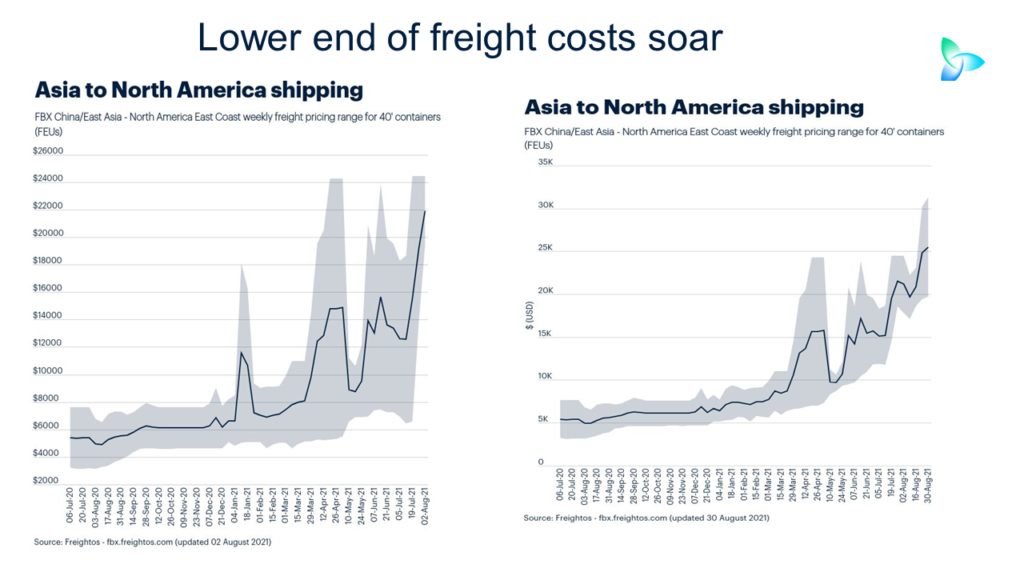 But with US PP injection grade delivered contract prices rising to $3,009/tonnes in August from $2,767/tonne in July, the premium over CFR China prices had risen from $1,658/tonne to an all-time record high of $1,889/tonne.

“This still made Asia-US freight rates workable for a tonne of polymers and I expect this to continue into September. But the question is whether US buyers will be willing to take the risk of the potentially very long delivery times if they buy US material,” said a PP industry source.

I know of one major Asian producer who believes that exports to the West in general have become pretty much unworkable – because of both higher freight rates and long delivery times.

Why has the small-volume Asia-US PP trade become so important? Because of weaker-than-expected growth during 2021 in China versus “bubble growth” in 2020, rising Chinese PP self-sufficiency and what I believe will be another year of negative demand growth in developing SEA.

Despite the recovery in PP demand in India relative to the collapse during the peak of the Delta variant, I still believe that across the developing world we are unlikely to see a big improvement in petrochemicals consumption in general until at least 2023. This is the result of the link between low vaccination rates and weak economic growth.

US PP imports in H1 2021 were 89% higher than in H1 2020 and 7.6% over H1 2019. As I discussed in my 23 August post, the six biggest PP exporters to mainland China – South Korea, Singapore, Taiwan, Saudi Arabia, the United Arab Emirates and Thailand – all appeared to make some revenue gains in the US during H1 over their revenues during the whole of 2020.

The chart below, repeated from the 23 August blog post, also includes my estimate of what could happen to the Big Six’s sales revenues in China during the full year 2021 versus 2020. I estimate that China’s total PP imports will fall to 4.4m tonnes in 2021 versus last year’s 6.6m tonnes. 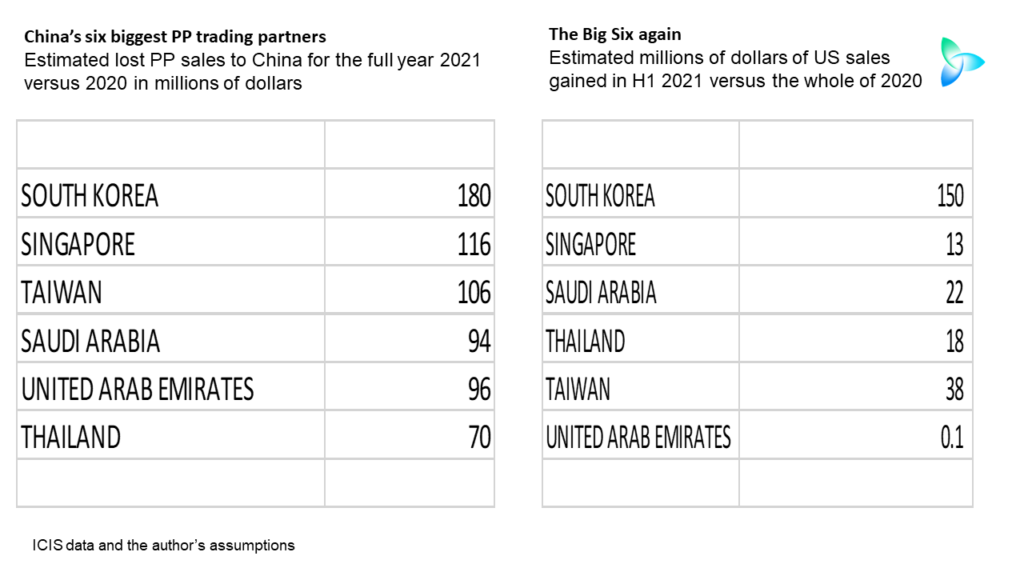 Markets have become more regional because of oversupply and weak demand in in NEA and SEA, logistics challenges making it difficult for Asian producers to relieve oversupply by exporting to the West, and tight supply and resilient demand in the West.

The irony is that as markets have become more regional, the pressure on NEA and SEA producers to be more global has increased. No longer can they just rely on local markets to comfortably absorb most of their production. The same need for a greater global focus applies to Middle East producers who have traditionally moved most of their volumes to NEA, especially China, and SEA.

A deep and very granular understanding of markets such as Turkey, India, Pakistan, Bangladesh, Africa and Europe – as well as the US – is more important in current market conditions than perhaps ever before.

This is where we can help through our vast – and I mean vast – data resources and expertise. Contact me at john.richardson@icis.com for more information.