Southeast polyolefins demand growth could be negative again in 2021

BEFORE the pandemic, GDP growth rates in the developing world were always higher than in developed economies.

And because developing economies had much lower levels of petrochemicals consumption than their rich counterparts, it meant that the multiples over GDP were higher than in the rich word, where consumption was pretty much saturated.

For instance, polyethylene (PE) demand in a developed country such as Germany might have grown at 0.3% times GDP whereas in Indonesia the growth could have been one or more times higher than the rate of growth in GDP.

But as The Economist wrote in this 11 July article: “In 2021 the poorest countries, which are desperately short of vaccines, are forecast to grow more slowly than rich countries for only the third time in 25 years.”

Might the multiples over GDP growth also be adversely affected in the developing world, trending lower than the historic norms?

They will almost certainly remain higher than the rich countries. But here is the thing: as millions more people are pushed back into extreme poverty by the pandemic or are denied the opportunity to achieve middle-income status, I believe that developing-world multiples may well decline.

Escaping extreme poverty means being able to, say, afford a whole bottle of shampoo for the first time rather than a single-serve sachet, thereby raising per capita polymers consumption.

More importantly, it means being able to afford food wrapped in plastic film for the first time. This delivers major health benefits as food wrapped in film is less likely to have gone bad. Food not fit for human consumption is in some developing countries a bigger health problem than food shortages.

Moving up to middle-income status enables people to buy motor scooters, washing machines, refrigerators and basic mobile phones and computers for the first time. These consumer products are again made from petrochemicals.

As I discussed last month following the very disappointing G7 meeting in Cornwall, the developing world has fallen further behind because of lack of access to vaccines.

The chart below – from the excellent Our World in Data – shows the vaccination gulf in most of southeast (SEA) – the region which is the subject of today’s post – versus selected rich-world countries. 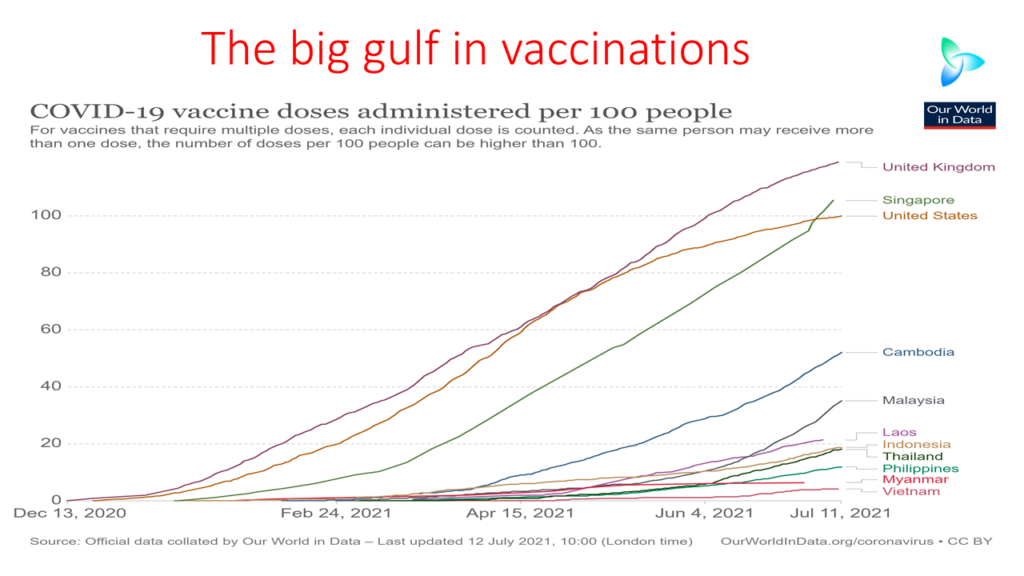 The chart shows the number of vaccines administered per 100 people (above 100 means an average of more than one shot per person).

The first round of full vaccinations is just the starting point, the basic level we need to achieve. Top-up vaccinations are probably going to be needed every year as with seasonal flu. Developing countries need the support to ensure adequate annual top-up vaccination programmes.

Financing costs could widen even further

It is a vicious circle, as I again highlighted last month. Because the developing world doesn’t have the resources to conduct adequate vaccination programmes, its economic growth prospects are weaker than developed countries.

Poorer countries are struggling to afford the financing needed to pay for vaccination programmes. The longer this continues, absent sufficient international support, the greater the economic damage.

Our failure to adequately vaccinate the world also means that container-freight disruptions are likely to drag on into next year, adding to inflationary pressures.

If the US Federal Reserve were forced to raise interest rates, the dollar would strengthen.

This would increase the costs of servicing dollar-denominated debt in developing countries, further eroding their ability to fund vaccinate programmes – again, assuming the rich world continues to fail to step up to the plate.

Rich countries have been able to spend many billions of dollars on job furlough and other income support schemes, as their costs of government borrowing are at historic lows. This has led to demand being stronger during than before the pandemic. This is again something that developing-world governments have struggled to do.

The middle classes in the rich world were also able to spend a lot of money on durable goods at the height of lockdowns. But the “extreme poverty” and “middle-income” effects described above have meant less spending in the developing world.

Increased petrochemicals demand in hygiene products is, though, a global phenomenon. But even here there is a divide as wealthier countries can afford more face masks, hospital gowns and bottles of hand sanitiser than their poorer counterparts. 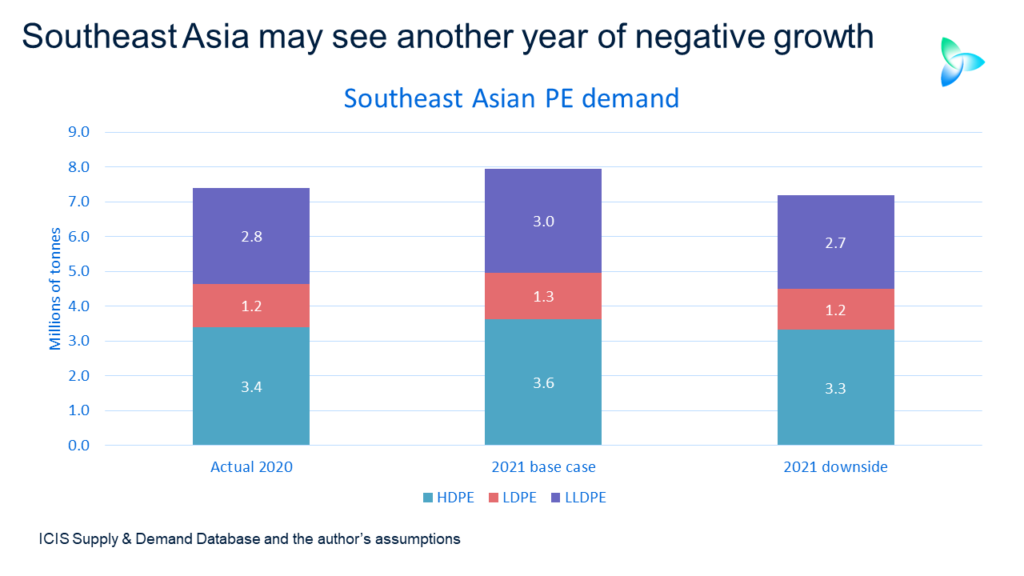 Our base case for SEA PE demand assumes 7% growth in 2021 over 2020 as all the countries return to strong growth – an almost perfectly symmetrical V-shaped recovery.

But Indonesia, Malaysia, Thailand and the Philippines are still being badly affected by the pandemic. A recent outbreak in Vietnam also represents a threat.

The crisis in Indonesia is gaining a lot of international notice.

For instance, the Wall Street Journal wrote on 7 July: “Public-health experts have for weeks warned that Indonesia, the world’s fourth most populous nation, could face a surge like the one that caused India’s hospital system to collapse in April and May.

But my friends in Malaysia tell me that Malaysia is also struggling to cope with a rapid rise in the number of cases.

This is confirmed by the data. As of 11 July, the seven-day average of new cases in Malaysia was 8,235 compared with 1,221 on 30 March, according to the Novel Coronavirus Visual Dashboard. The dashboard is operated by the Johns Hopkins University Center for Systems Science and Engineering.

Our forecast for a V-shaped recovery in PE demand growth assumes a rebound in tourism. But this isn’t going to happen. Tourist arrivals in Thailand and Indonesia – the region’s economies most dependent on tourism – will remain well below pre-pandemic levels.

Let’s assume similar levels of negative PE demand growth  we saw in 2020 over 2019 are repeated this year (the bar charts on the extreme right of the chart).

Now let us repeat the exercise for polypropylene (PP). 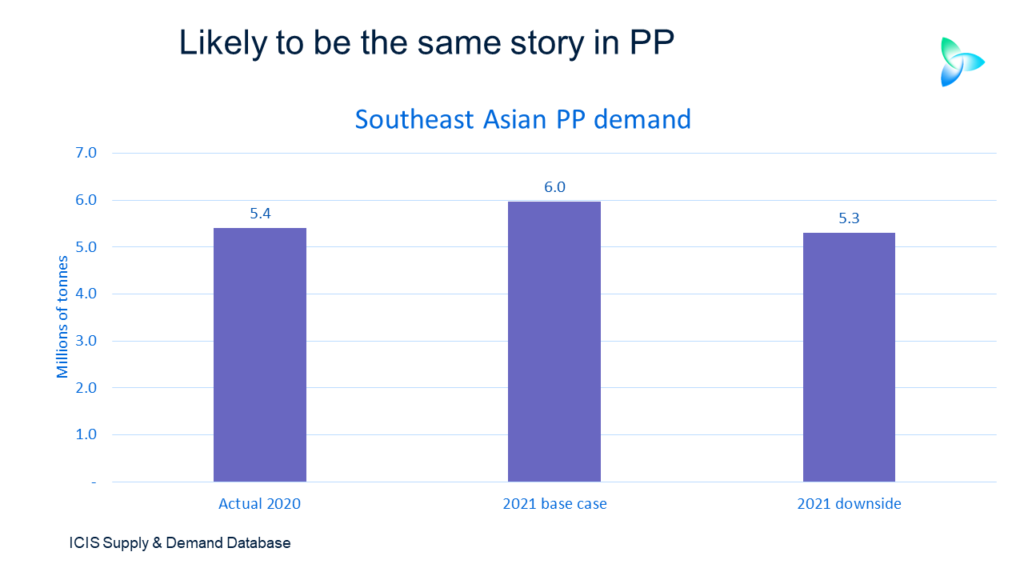 Our base case assumes 10% growth in 2021 over 2020. We again assume all the SEA countries return to strong growth

What polyolefins producers and buyers must do next

If you are an Asian polyolefins producer the obvious answer is to export more cargoes to other region. The weak SEA growth fundamentals are one of the reasons for the extraordinary chart you can see below. 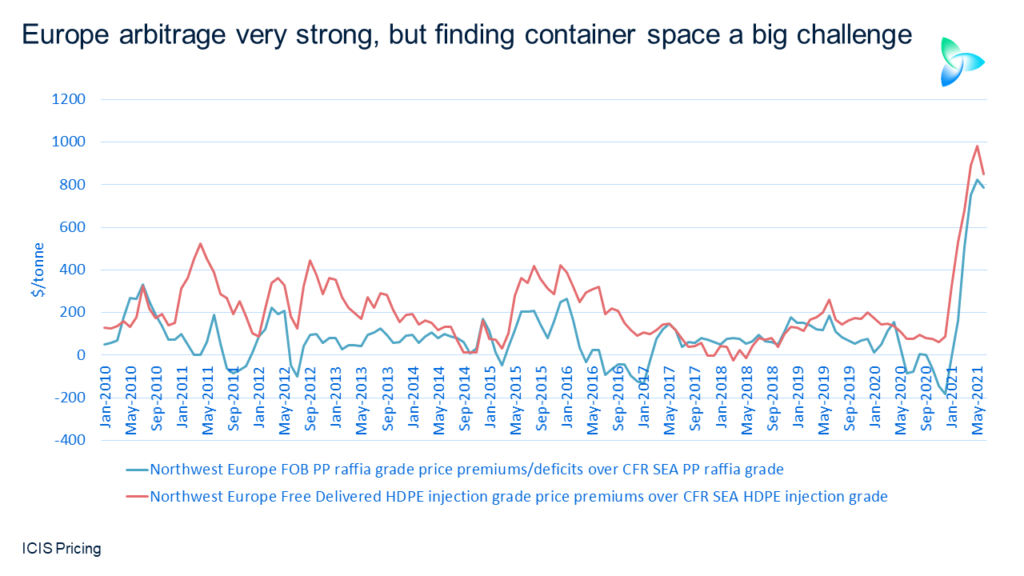 The same strong arbitrage opportunities exist between SEA and other countries and regions such as Turkey and South & Central America.

But as a Singapore-based polyolefins trader told me the other week: “Polymer cargoes keep bouncing off logistics walls because of the lack of container space and the high freight rates.”

It can be done, though, as demonstrated by the more than 400% increase in China’s PP exports in January-May 2021 versus August-December 2020. Top destinations for Chinese PP included Turkey, India, Pakistan, Brazil and even Peru.

The other factors behind the big price differentials are increasing Chinese self-sufficiency in high-density PE (HDPE) and PP and weaker Chinese demand in January-May 2021 over the last five months of last year.

If rate cuts don’t happen, local producers must find ways of raising inter-regional exports. Buyers outside Asia have a big opportunity to save on their procurement costs, as I’ve been stressing for the past two months.

I don’t see any of these fundamentals changing for at least the next six months. The container freight market will remain badly disrupted with SEA demand weaker. Chinese demand relative to 2019 will remain strong. But the air has poured out of China’s export driven H2 2020 growth bubble.

What about the prospect of Asian producers turning down production? The chart below – using the example of linear-low density PE variable cost margins – shows that Asian producers continue to make money – albeit much less than their competitors from other regions. 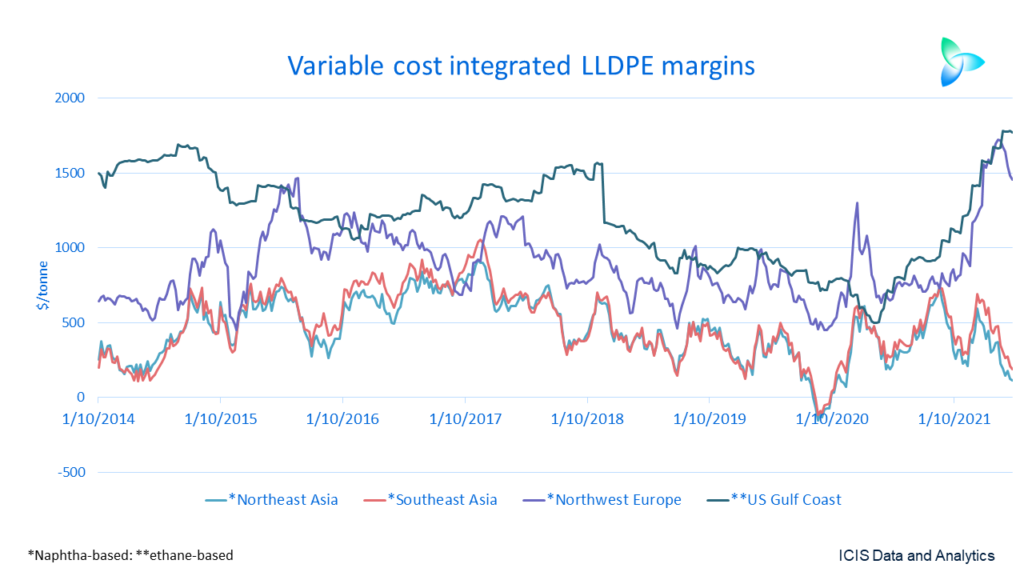 But margins have recently fallen, as you can see, on the the supply and demand fundamentals along with higher naphtha costs resulting from increased oil prices. It is the same pattern in HDPE, low-density PE and PP margins.

The last time that Asia saw major rate cutbacks was in November-December 2019 when margins had turned negative.

I am afraid this isn’t too strong a term for the failure of the rich world to provide enough vaccines. The struggle against extreme poverty has been set back. Many millions of people are being denied the opportunity to move up the income ladder to middle-income status.

From a hard dollars and cents perspective, global polyolefins markets have become more volatile and harder to manage because of this moral failure.

In the mighty scheme of things – and again from a brutal dollars and cent perspective – what happens in SEA, Africa, South & Central America – doesn’t matter that much from a global polyolefins demand perspective. The reason is that more than 70% of global demand comprises the developed world plus China, which is not a typical developing economy.

Lost growth is still lost growth, though. I am struggling right now to see how 2022 will be any better than this year. We could see a third year of negative polyolefins demand growth in some parts of the developing world.

This is why solving the vaccinations crisis must be resolved. What can we as a petrochemicals industry do to help? What are we already doing to help?